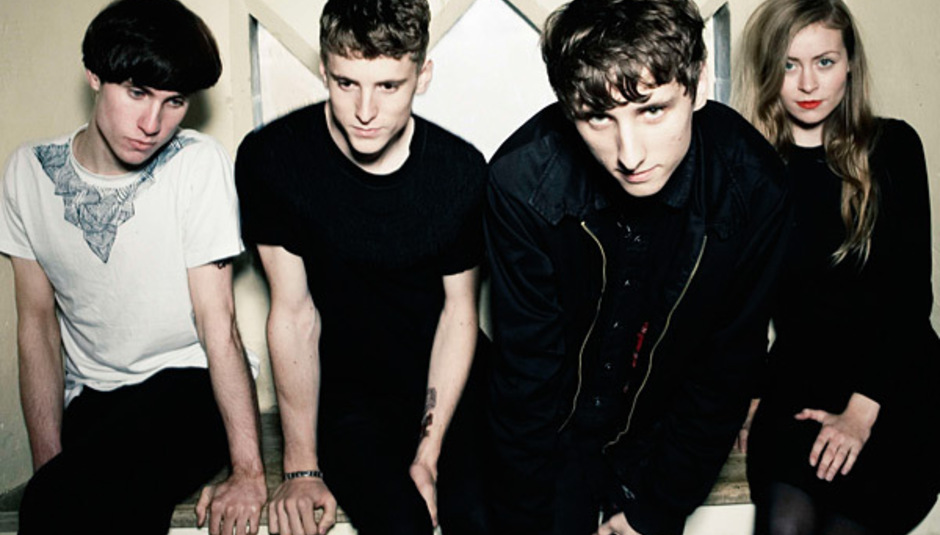 Normal service resumed this week, and what a bunch of albums, singles and news stories we've had to hand-pick this playlist from. No fewer than TWO 9/10 albums, a couple of 8s and a Suede re-union. That's not mentioning the two Singles of the Week, by Yeasayer and These New Puritans. Brill.

Is it possible for a track to be both the song of 2009 and 2010? This one has got to be a pretty strong contender, already burned into the deeper sections of the brain by the time the clock ticked over from the noughties to the 2010s. No surprise, then, that it won our Single Of The Week when it was actually released. Deservedly so. Think it's about some boxers from yesteryear or sommat. Wibbly!

Vampire Weekend have been pretty widespread this week, playing a show at Somerset House, above an ice rink. From what I've seen it was pretty well-attended. They also took us through their brand new one, Contra, in a track-by-track guide, which you may very well be interested to read.

The band's new single 'Graphic' was described as 'Ace!' by Singles Lady Wendy Roby. True story. We were going to cheat a little bit by putting Memory Tapes' remix of Yeasayer's 'Ambling Alp' onto this playlist, but then realised that's not doing anyone any favours, so decided to stick in 'Bicycle', which is pretty damn fine anyway. Surely no squabbles.

Possibly the finest single piece of music on Still Night, Still Light, perhaps except for 'Knight Of Wands', 'Another Likely Story' is a perfect example of what Au Revoir Simone are 'all about'. Swirly, slow-moving keyboard lines, high-pitched fairy-esque tinkling, enchantment, and the slightly creepy female harmonies. We posted the video for this single. Worth a watch it is.

July may seem incredibly far away in this particularly bitter winter we've been experiencing, but with Laura Veirs' July Flame, it becomes something more than a distant memory. You can almost taste the cold lager on a hot day. Or whatever particular event you people define your Summers with. We reviewed that album here, awarding it 8/10.

This guy used to be known as Final Fantasy, in homage to the popular computer game series and whatnot. He then decided to change it, perhaps wisely, after some legal issues. His new album comes out very soon, and judging by our review, it's exceptional. This song was apparently used in a Flora advert, but I certainly don't remember it.

Eels have produced such a significant quantity of music of a similarly great quality that it was difficult to see their new one, End Times, being anything less than 7/10. Predictably, it wasn't any less, scoring 8/10 in our review. Nothing from that album on here, but this'll do, won't it?

When the news broke that Jay Reatard had died in his Memphis home aged 29, it was nothing short of shocking, and it still remains this way for most - hard to comprehend how someone so young could just 'go'. Here's to Jay, and his own brand of energetic, ear-bashing, raucous indie. R.I.P.

Bands just can't stop reforming lately, can they? Does it tire you out at all? Probably not when the band in question is Suede. Anyway, enough deliberation, they're reforming, whether you like it or not. The gig is for the benefit of the Teenage Cancer Trust, so it's not like they've suddenly all spent their money on new lawnmowers and had to desperately reform before their shrubbery gets repossessed.

Spoon returned with a new album this week. Called Transference, we reviewed it, obviously, giving it a highly commendable 8/10. Neil Ashman said: "Transference doesn't want for melodies or hooks. Spoon are equally as enjoyable, and perhaps that bit more intriguing, when they are a little bit harder to fathom. Plus, to put it simply, there ain't a duff track to be found here."

Girls are one of those bands of 2009. The semi-hyped ones. But it's OK, 'cos they're actually pretty decent. OK, on some of the songs the lead singer goes a little bit whiney, making you want to yank his hair to the ground pretty hard and pretty swiftly, but it's not always like that. 'Morning Light' rocks more than anything on the record, and you can watch the video for it here.

Everett True reviewed the Falls festival in a blistering Melbourne. Why anyone would want to endure that heat, watching bands or not, is beyond any of my powers of reasoning. He put himself through it, though, and so did the appreciative fans of Seasick Steve. They like-a-his-whisky-drinkin'.

The bassline on this track is fucking wholesome. There's no other word I want to use to describe it. Could do with being a little higher in the mix, but overall there is little wrong with the New Zealanders' own form of borderline psychedelia. They returned with a new one, a free mp3 download from our very site.

Speaking of returning, Rochdale's finest electronica duo return in a couple of months, with a new record as well as a tour. This typically hard-to-pronounce Autechre track makes me think of a man in a wheelchair trying to swat flies by torchlight.

15. Sunburned Hand Of The Man - 'The Parakeet Beat'

These guys sit firmly at No. 14 in the 'Best Band Names Ever' list, a voted by viewers of Kerrang! TV. They have a new album out this week, simply called A, and fucking A it is, for the most part, being produced by Kieran Hebden, A.K.A Four Tet.

The sparsely, lethargic percussion of the previous track kinda leads nicely into the more bold and purposeful skin beating in 'We Want War', as though someone had taken all the ideas, smashed them out and found some purpose, by the lorry-full. We start he playlist as we began it, with a JOINT Single of the Week. The full record, Hidden, was also released this week. 'kin MASSIVE, it is.