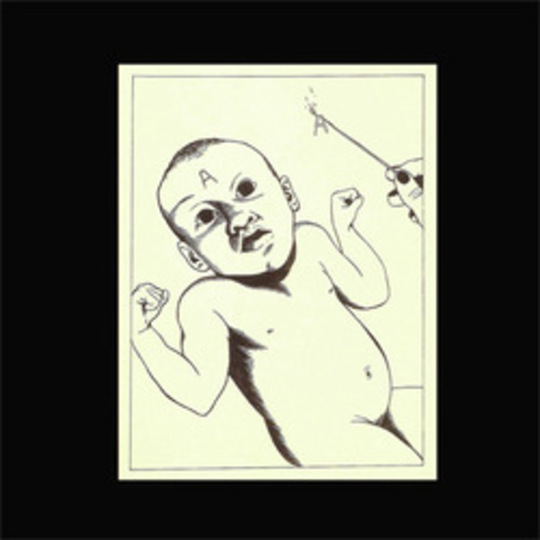 The second Sunburned Hand of the Man album to be produced by Kieran Hebden, A is surreal and highly cerebral, but not impenetrably so. It is also partial to more-than-occasional plunges into the abyss. It feels like entering a space which invites you to live inside, where the inhabitants are all smiles for a while, but machinating like crazy, slow and subtle, so you don’t even notice things are wrong. Until the sense of unease crystallises suddenly to reveal its source has been there all along. Track two, ‘Now Lift The Outer Finger (For Newcastle)’, has a rising source of tension. The noise of childish hands clumsily jamming plastic parts together is the primary sound, although it is the synths and scrabbly strings that gradually rise from the background to subsume the track which bring the off-kilter menace. The bell which chimes periodically is wonderful in this context, it seems to demark each segment of the plastic’s construction, while the narrowing gap between the bells feel like warnings of something to come. The track borrows heavily from the naivety of Susumu Yokota records like Grinning Cat, but goes much further towards the dark side than its Japanese peer.

One of A’s strengths is its ability to indulge while remaining focused, to explore ideas to their logical conclusion without descending into a load of wankery. The album remains taut, but also still capricious enough not to care whether you think it is or not. The leeway the band award themselves is made easier to stomach by the fact that they are also unafraid to change direction several times over the course of 11 tracks. Thus track three, ‘Loft At Sea’, apart from possibly being a genius play on words, is a marked change to its predecessor. While still incorporating several ambient tricks, it is a much more solid proposition than ‘Now Lift The Outer Finger’, fusing jazz, techno and heavy doses of reverb to come close to the more downtempo moments of Autechre. Having a producer as skilled as Hebden no doubt helps to maintain focus through these right-turns, and his touch ensures that whatever the ambition of his charges, it sounds fully-realised.

‘The Books of Ability’ finds another change in order, coming even closer to the ethereal psych of Yokota than previous numbers. This time the sprawl of sound travels where it needs to in order to get the job done; found sounds and those more easily identifiable with traditional instruments are given equal billing for the task. No egos pull rank here, all vibrations are drilling in the same direction, fuelled by curiosity.

This album yields no singles or obvious entry points: it requires the listener to just dive in and be fearless to achieve the best experience, yet track nine, ‘Action Figure’, is a slightly more accessible proposition than most of its neighbours. It launches straight into a recognisable groove with none of the preamble of the rest of the record. A consistent breakbeat is accompanied by electronic snippets which sound like recordings of an old dial-up modem trying to make a connection to the internet, not a recording of the modem in its entirety, more like one which has been sliced up into samples and then drizzled over the track Jackson Pollock-like. When the dirty, springy synth makes it appearance, the effect is not connection but disconnection, and funky enough to come out of left-field even in a record which makes it its mission to exist in the left-field to start with.

For all of A’s virtues though, it still has a cold detachment inbuilt which makes it a lot easier to admire than to actually love; at least not in the same way as many of the records of its producer.