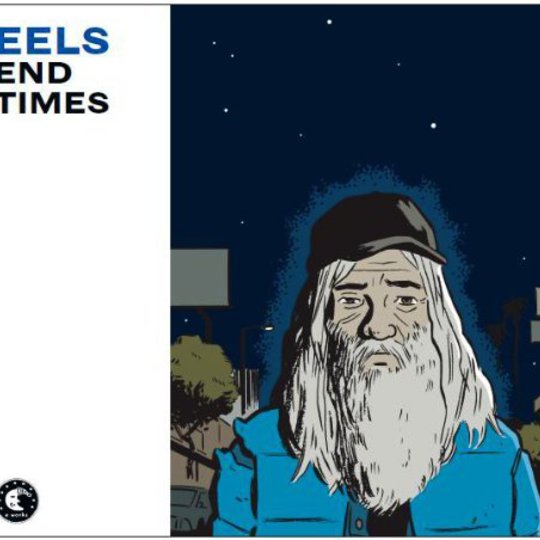 “Well, it’s a pretty bad place outside this door / I could go out there but I don’t see what for.” Eels' eighth set is Mark Oliver Everett’s self-described ‘divorce album’, painting him as a Gatsby-esque figure, rattling around his Los Angeles home alone. “It’s just me, myself, and the secrets that live within the walls / of the Mansions of Los Feliz”. Written and primarily self-recorded in his own basement, this record tells a true story as laden with a deep sadness as anything Fitzgerald’s fiction ever imagined. Stories told with poetry, sung from a neighbourhood which Everett sings as a near homophone for ‘lost feelings’.

When he steps outside his mansion things don’t get much better. “Nowadays you go for a walk / Better not stop and wave or say hello / Just as soon people will spit / Give you shit just for looking at them”. The only person who Everett can relate to is the “crazy guy… shouting out ‘End Times are near’”. Not because he shares in his apocalyptic conspiracy theory, but because, “She is gone now… seems like End Times are here.”

End Times is a break-up album that lashes relationship breakdown onto societal collapse, and rarely has Everett sounded so plaintive, so utterly broken down. Even Electro-Shock Blues, which dealt with the deaths of his mother and sister, had musically upbeat moments like ‘Cancer for the Cure’ and ‘Last Stop: This Town’. Blinking Lights and Other Revelations was full of them. On End Times they are fewer and farther between and even when Everett does harness that life-affirming energy, as on ‘Gone Man’, he can’t help but flip the classic Rolling Stones refrain “I used to love her, but it’s all over now” to the rather more lugubrious “She used to love me, but it’s over now”.

Everett is self-aware about his changing pace. “In my younger days,” he sings, “this still would have knocked me down, but I would have bounced right back, you know?” His tragedy-filled life has been well documented, but his music has always held a glimmer of hope within it. On End Times he lets his world-weariness spill out a little more. “In my younger days / I would've just chalked it up / As part of my ongoing education / But I've had enough / Been through some stuff / And I don't need any more misery / To teach me what I should be / I just need you back.” The weariness is there again on ‘Apple Trees’, a short spoken piece in which he describes feeling like just one of a billion identical trees.

Offsetting this is his knack of raising a smile with a well conjured turn of phrase. ‘A Line In The Dirt’ might be a blow-by-blow account of a bitter argument, but the opening image of him having to piss in his yard because his wife has locked herself in the toilet is shot with a dark humour. Everett’s public references to his 2005 divorce have generally been limited to directing people to the chapter of autobiography Things the Grandchildren Should Know entitled ‘I Love Crazy Women’. That sentiment informs ‘Unhinged’, where he describes the twinkle fading from “crazy eyes” while touchingly confessing “you were more than my girl, you were my best friend”.

The broken heart of this album is the gorgeous penultimate track ‘Little Bird’, which condenses the record's themes into the succinct “God damn, I miss that girl”. As Everett talks over his problems with his avian companion he manages to find the hope he’s been searching for. “Tell me this can’t be / How it’s gonna end / Tell me my heart, somehow / Dear God, is gonna mend.” Everett might be alone right now, but just like Gatsby he still believes in the future, that “tomorrow we will run faster, stretch out our arms farther...” The album closes with Everett looking forward to a time when he’ll be back ‘On My Feet’. He is surely understating matters to say he’s “pretty sure that I've been through worse”, but nonetheless he’s “a man in great pain over great beauty”. When he says that “The shit that matters, and what I’ll really miss, is falling asleep with your arms around me”, Everett is talking directly and honestly of the unutterable, gut-wrenching loneliness of loving and losing. To borrow a phrase from another great American poet, “Boys and girls in America have such a sad time together.”