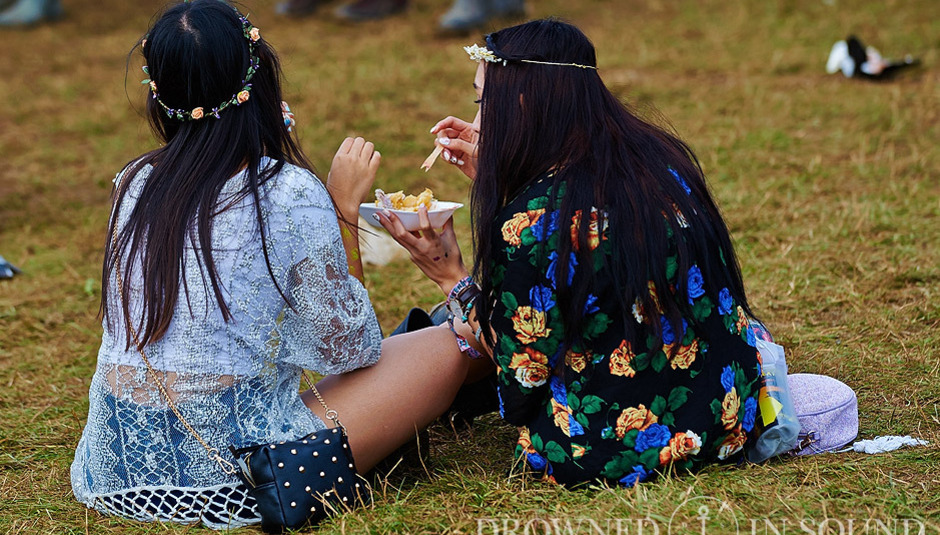 It’s early morning and an email screaming “HOW TO DO FESTIVAL THE COOL WAY” arrives from Topshop. After some profuse swearing, I click through to see what words of wisdom Philip Green and his minions at the Arcadia Group are offering.

"Denim cut-offs, floral garlands, fashion wellies - you know the drill. We love our festival essentials, but how about mixing it up this summer? From luxe bohemia to rocking a heel, we’re championing individual style with these new ideas – who said festival needs a uniform?"

Firstly, good luck in heels at a rainy Glastonbury - you’re going to sink in the quagmire, next to the Catfish and the Bottlemen set you were valiantly trying to escape, ending up looking like a very soggy, DIY performance art installation. Secondly, floral garlands count as “essentials”? Will Michael Eavis be personally doling them out on the gates, or am I expected to raid the flowerbeds at Castle Cary station and weave my own wreath? Thirdly, by “festival” singular, you mean “festivals” plural: a festival is not a look, it’s an event.

Kicking a fashion retailer for trying to flog you fringed tank tops is a pretty futile - if satisfying - way to pass the time, but it’s their hypocrisy that frustrates me. According to Topshop, there is no “uniform” and yet in the very first line they have prescribed one. Even worse, in broader terms they’re implying that females must conform to their arbitrary sartorial rules if they wish to be accepted. Planning on wearing something sensible to navigate the long-drops in? Unlucky, ladies, that’s not “cool” enough. You notice I’m purposely emphasising the female experience here: at the time of writing, there is no comparative feature on the Topman website. Who’s offering men advice? And what the hell have we women done wrong to deserve the fashion industry’s didactic scrutiny?

With the average British woman now spending an estimated £500,000 on fashion in her lifetime, festivals contributing billions to the British economy, and there being a pretty-much equal split between the number of men and women attending big music events like Reading and Leeds, it doesn’t take a genius to see why the big brands are cashing in on female music fans. Be in no doubt: we are in a position of power. So why does the media insist on making us seem weak?

Whether it’s step-by-step guides to “beachy waves” and “boho braids” in Marie Claire, or Ella Eyre offering advice on bagging the perfect pair of white jeans (in collaboration with River Island™), if you search online for the phrase “festival fashion”, you’re greeted by page upon page of articles aimed solely at females.

Now, don’t get me wrong, I’m all for freedom of expression, and aesthetic diversity enriches the festival experience. There’s something joyous about partaking in the 21st century equivalent of the “Feast Of Fools”, where all rules for what is, or isn’t, sartorially acceptable are temporarily suspended. Observing those bizarre outfits, those outré fashion statements – which are sported by women and men – is fun. My problem is that we’re allowing a sexist, racist, ageist, size-ist industry to undermine that, by turning a blind eye to them targeting just 50% of the population, and then shaming that 50% into conforming to their airbrushed ideal.

As a music fan, what I find even more worrying is that these “festival fashion” features only perpetuate the myth that women are incapable of enjoying music for music’s sake. More than that: these features are flat-out telling us we’re not allowed to. The subtext appears to be, “Girls: the boys have generously granted you access to their sphere; the least you can do is look pretty.”

It’s an extension of the grossly-sexist misconception that women only buy records as a fashion accessory; that when we say we love a band, it means we merely have designs on the lead singer; that suggesting we pay for merchandise in fucking blow jobs is totally acceptable because, hey, we’re probably not even paying attention to the gig anyway. It’s also synonymous with the kind of everyday sexism which sees Rolling Stone publishing a Coachella gallery composed nearly entirely of women in bikinis, and that allows men to subject PJ Harvey to a sartorial critique instead of a live review, featuring clangers like, “This woman can hold her own with the boys.”

Some news for you: with 15 years’ worth of festival experience behind me now, I can tell you that the only “festival essentials” are sturdy footwear, a waterproof jacket, a warm jumper and some sunscreen. How’s about this, Topshop: I’ve spent years watching live music with chip grease on my t-shirt, mud caked on my jeans, the day-before-yesterday’s mascara smudged across my face, and a layer of frizz on my (otherwise matted) hair that could eclipse the sun. And you know what? None of my companions thought any less of me for it because a) they looked similarly disheveled and b) we were there to enjoy live music, not to appear in one of Elle’s Street Style festival specials.

Women: dress down or up as much or as little as you like. I support your choice to wear unflattering, highly-practical hiking gear, just as much as I support your choice to wear nothing but a bikini and a fedora - though I still reserve the right to be pissed off if said fedora is obscuring my view of the stage. Festival fashion is a feminist issue: don’t let Topshop and the rest of them pressure you into “investing” in a “festival wardrobe”. Who knows, with the money you save you could probably afford a Primavera ticket too.

In Photos: Future islands @ The Round...