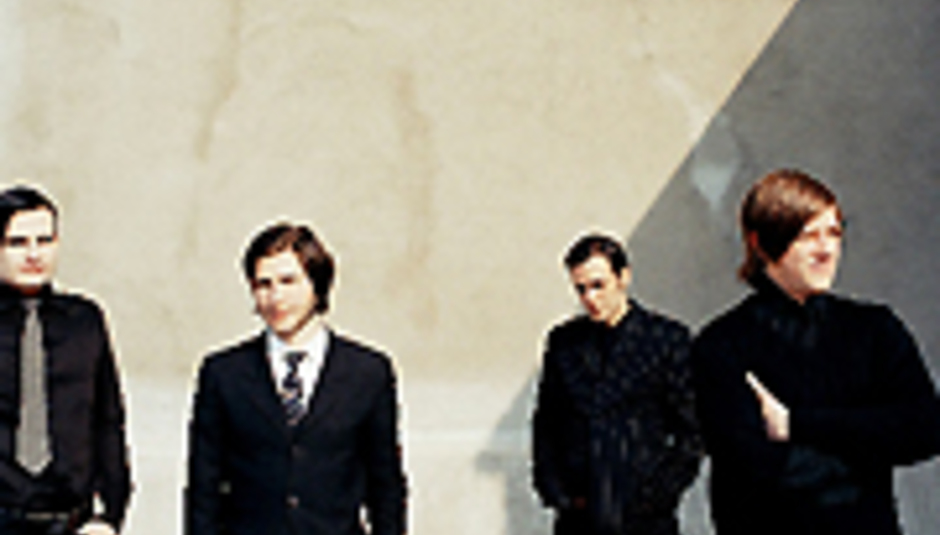 “It’s great to be back in London,” says English born guitarist Daniel Kessler. And London it seems, is more than happy to embrace Interpol back in its arms. It’s a Friday afternoon before Mr Kessler and his fellow associates are set to play the first of their sold out shows at Brixton Academy. But playing sold out shows is standard for Interpol.

From the days when they used to play small smoky clubs in the Big Apple to having a significant spot on the Curiosa tour, here is a band that are coveted by many making them one of the hottest tickets around. So it’s only right they should circuit the world’s rock ‘n’ roll highway a couple of times a year.

Although he is happy to be back on the road, Daniel admits he is beginning to feel slightly homesick.

“You miss your friends, you miss your hometown and you miss everyday stationary life. But there are pluses and minuses. I do enjoy touring because you get to meet people, visit different cities and play shows. But of course I always miss New York a lot,” he says.

Ah yes New York - the city that has given us so much in the way of fashion, music and lifestyle. It’s its sheer ability to be cosmopolitan that leaves you thirsting for more and we’re not talking about a cocktail featured on an episode of Sex And The City. We’re talking about the city's incredibly inviting nature that is able to leave you to enjoy its diverse sophistication on the one hand and then leave you feeling swamped in it’s metropolitan madness the next. While Dylan Thomas stated that Swansea was “the graveyard of ambition,” New York it seems, is just where it all begins. And Interpol are living proof of such a theory. As it’s been repeatedly documented, it was Daniel’s very determination to fulfil his ambition to form a band during his four years at NYU. It was here where he found bassist Carlos D and later reconnected with singer Paul Banks, who he met while previously studying in France. Thereafter a coincidental meeting between Sam Fogarino and Daniel at a club in Chicago was enough to sway the drummer to get packing and join their adventure in The Capital of The World. Its no wonder they saw fit to tribute a song to it.

That said, it wasn’t as simple as, “hey presto, look out Interpol are on a mission for world domination.” Far from it, it took a lot of hard work to get there from their inception seven years ago. “The biggest challenge for so far still remains with initially trying to find the people to work within a band,” says Daniel.

“Considering we weren’t childhood friends it was tough having to get to know each other and working through our differences so things came together.”

Being a savvy foursome, it’s not surprising they may have encountered a lot of compromise and logger headed stubbornness in the beginning. A little background on them reveals Daniel has dabbled in the music industry in the past, Sam was with a renowned record distributor and Paul had a short editorial stint on an entertainment magazine. As for Carlos D, those years of studying philosophy and being the outsider kid with an astute disposition, means he is undoubtedly sagacious beyond his years. With all this know how in the band there was little room for naivety when it came to making decisions. The only way to get round it was by instilling a democratic ethic in the band.

Which is all fair enough, but surely this means they are prone to many clashes or disagreements, given the amount of time they have to spend together as a unit?

“You know I think every band comes up against this regardless. Definitely the way we work would invite something like that. But at the same time the band’s with one guy who is delegated to do everything does allow growth for a lot of hidden anger and resentment,” reflects Daniel. “For us, the reasons for doing this partially is we believe it makes us stay focused on the music and it’s going to lessen it, because everyone is going to have a podium to stand to have their say. Everyone has a vote that will be counted. I don’t think our way is necessarily right but it’s something that was needed in our band.”

The old, “better out than in”, routine. As well as it being a healthy approach to nurture their strong personalities, it has made them far more distinguished than the rest. And it’s not just their debonair wardrobe that gets everyone’s attention. It’s their talent for being able to make people take a closer look rather than just accepting the superficial norm. And yet it is done so concisely that it’s difficult to pinpoint exactly where it derives from. The remixes from each member accompanying their latest single C’mere, which recently entered the UK top 20, is able to show a little more insight. While Paul does a stripped down acoustic version of Narc, unveiling his love of obscure minimalism, Carlos D’s techno inventive work on Public Pervert is able to master a surreal beauty from the dark side. Sam’s offering on Length of Love, with the additional help of Bob Mould, reveals a pert sensibility with rhythmic dance pulses. And Daniel’s nocturnal touch on Not Even Jail, shows off his complex introverted ideas.

“Normally everything we do on a major scale is always a band decision. But when we were making the record, each of us were bouncing off ideas on how things should sound. We just thought it be great if we all did something in an individual way,” enthuses Daniel. “It was a really interesting experience to be in the studio and coming up with an idea with a record where I could tell the engineer what I wanted to happen and not have a band input on what they think should happen. I think it these b-sides show a contrast to people, because this is the opposite of how we are as a band.”

Having sold 350,000 copies within the first four months of its release and receiving gold status, Antics has propelled Interpol into the mainstream charts. It was also voted DiS album of the year by both our readers and staff.

Despite all its success, Daniel remains humble.

“I don’t really see it as a surprise as we’ve never really expected anything. We just really wanted to put out a record, which we were happy making and allowed us to write songs we wanted to. As for hoping for big things, it’s never something that crossed our minds. But at the same time it’s extremely pleasing people are really taken with the record. I think we’ve been fortunate people have been forthcoming and are really supportive.”

In general there seems to be a romantic tone in the music whether it's desperation, frailty or hope. So would it be fair to say that they are just a bunch of old romantics at heart?

“I think so. Not in the ordinary sense of the word,” admits Daniel slightly bashful. “It goes beyond lyrics, music or passions but is more integral to feelings. For my part I tend have that certain type of vision.”

When Interpol first started out, they were branded as an imprint of past post-punk new wave ghosts. But after proving their worth with their debut album, Turn On The Bright Lights, and playing stunning live shows, those who were too hasty to judge were soon eating their words as quick as you could say Joy Division. With a mixture of styles that encapsulate abstract art rock, Goth, Americana, and even Reggae, they are far more eclectic than just a bunch of dark broody tunes. Each track is delivered with such precision whether it is the sneaky surreptitious bass lines and addictive cainning on the drums or the haunting vocals spurred with evocative guitar strums. With a versatile outlook, it seems that their songs have a timeless quality to them. Flattered by this notion, Daniel says,

“That’s a nice way of describing our records. It would definitely be a great honour if our records did stand the test of time.”

This hasn’t stopped them from already becoming legends in the own right. You only have to look at the array of bands in today’s climate, who show how much of a lasting impression they’ve made. And yet, Daniel finds this prospect hard to get his head round. “It’s surprising since we’ve released such few records and definitely something that takes getting used to. It catches me off guard when someone mentions it because we don’t necessarily see it. It’s certainly interesting to see how our tenacity to write good music inspires a lot of people.”

Among those who are inspired include U2 and Coldplay as the band have been requested to support them on some of their dates in June. In the whole scheme of things this could be a pivotal step in Interpol's future alongside with Antics being the last record on their contract with Matador. The hoards of eager labels ready to get their mitts on them looms, but Daniel is quite happy with just taking each day as it comes.

“We’re pretty good at not looking too far ahead – that kind of helps us remain fresh. So at the moment we are focused on touring for this album. We’ll see what kind of direction that’s taken us in because we keep on progressing. Hopefully it will bring us to exciting avenues which we can pursue.”