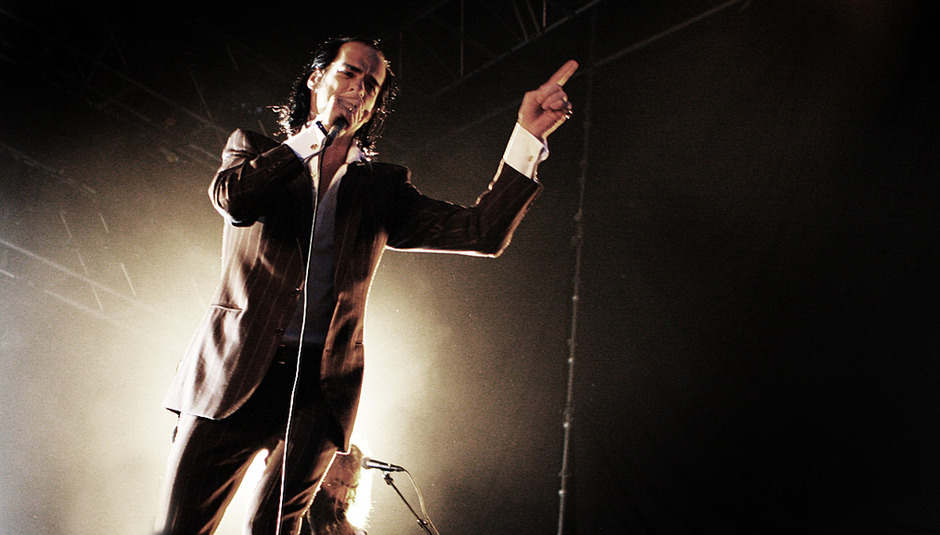 It's f-f-f-f-f-f-f-f-f-f-fuh-Friday! Here's our Spotify playlist running down the week that was... well, yeah, it was somewhat won by re-issues, comebacks and threads about pop-punk. Who says we need to be cutting edge all-day everyday? Not Napster co-founder Sean Parker, that's for sure. In fact, I'm a bit a neophobe, and utterly sick of the constant churnover of new bands, where newness seems oddly valued above actual quality... If you want to hear me bang on like the boringest guy in the pub, just follow me on twitter @seaninsound.

Nick Cave & The Bad Seeds 'Fifteen Feet Of Pure White Snow'
Everyone wishes he was their uncle (tupelo) and well, all the girls wanna snog him and guys just wanna stroke his tache, and maybe caress his bum, and possibly watch him get in a bath and touch himself, whilst reading some Burroughs... This week Nick and his Badseeds slung out three re-issues to remind us how fucking great he is and they are. We tossed back some words and 10/10s.

Death Cab for Cutie 'You Are A Tourist'
DiS doesn't let any ol' band "takeover" our website. These past few days, to celebrate their 7th album, we've let those chaps from Death Cab for Cutie take us over and boy-oh-boy, have they taken us places. There's more to come, just as soon as I've finished waffling irrelevance about each of these songs and inserting relevant links.

Frightened Rabbit 'The Greys'
To celebrate 5 years since the release of their debut album, them Frabbits chaps played a Don't Look Back style gig of it, and before they hopped on stage, Scott shared his thoughtful track by track commentary on the album.

St. Vincent 'Marrow'
Dear Annie Clark, please stop being so awesome, you're putting everyone else to shame. Many thanks, lotsa fanboy-veering-on-stalkerish love, DiS.
This week she covered Big Black and yeah, it was amazing.

Suede 'So Young (Remastered)'
A rare 10/10 was handed out for this re-issue. Rightly so? (Feel free to moan below)

Meursault 'Crank Resolutions'
As featured in our regular 'local' column looking at DiS-liked stuff from our man in Scotland. Drowned in Scotland: May-June 2011.

The Rapture 'Heaven'
THE END IS NOW! Punk Funk Lives! Although, they didn't exactly reveal the news at the exact time of the Rapture, they did, however, share some news about a new album and many of you joined us in squealing like it was 2006 and you could still buy magic mushrooms on market stalls.

Tom Vek 'A Chore - bretonLABS Remix'
He's back too. And has a new video for new a song named 'World of Doubt'.

Digitalism '2 Hearts'
They're back an' all! And they too have a new video.

Warpaint 'Undertow'
The latest name added to the DiS bill at Summer Sundae. Hurry up and be August now. Plz?

Boris 'Attention Please'
Avant got a clue who they are? Then read this review.

Battles 'Ice Cream (Featuring Matias Aguayo)'
SINGLE OF THE WEEK! See what else Wendy Roby was waffling wondrous words about this week here.

Found 'You're No Vincent Gallo'
You'll also find this lot in our latest Scottish column.