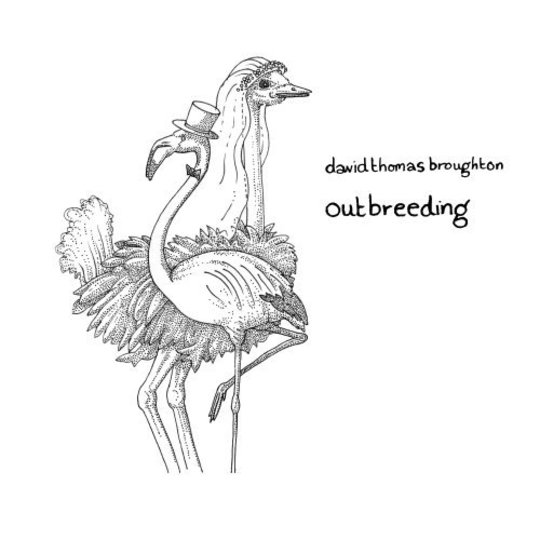 David Thomas Broughton is nothing if not underrated. That is not to say he isn't rated at all, but in some ways the level of acclaim seems disproportionate to what he has managed to produce so far. No surprise that this level continues and even increases with Outbreeding, a record which captures the man and the musician perfectly in its ten tracks of fluctuating emotional peaks and troughs and fits and starts.

An overload of variety can be perplexing, whether it's to the mouth, eyes or the ears. The eye wanders, but so does the ear and it's difficult, nay impossible, to not be distracted by the myriad streams entering the auditory canals during the course of Outbreeding. There is an awful lot happening left, right and centre with simple beginnings becoming greater and greater. The one component which holds it together and keeps your attention the most is Broughton's voice – his literary voice as much as his musical one. It was often said that beige-suited and beige-skinned cricket commentator Richie Benaud was (and still is) a great because he only told the listener what they needed to know, with the pictures filling the thoughts when he wasn't orating. That philosophy applies to DTB, too, who knows when to sing, unrushed, and when to let everything else play out, unaccompanied vocally.

Regional accents in music can be strange things, yet it shouldn't be this way. They should be not only embraced but encouraged. How, exactly, can a singer be expected to truly find their voice if they aren't using it? Broughton's tone and intonation are prominent and unmistakably Yorkshire, inhabiting a place where rounded vowels abound. Even though this is not the most significant aspect of his music, the effect is warming in the extreme, like a hug, both friendly and forlorn, no more so in the weary and worn 'Perfect Louse'.

The introspection reaches a peak with 'Electricity', which one imagines would be either delivered with firmly knitted brows or a painfully deadpan, straight face. Or, perhaps, both. Each word is eminently quotable but the most pertinent passage is the final offering: “in the main all that I can glean is that it is the reason that this world is fucked / underneath our discrepancies is a glint of hope / and I call this thing love.” Strange, but equally deliberate, those apparently downbeat tracts are followed by 'Ain't Got No Sole', which represents the highest high of the record's ten tracks – if not quite reaching what you'd call euphoric - directly after the nadir. It also shows perfectly the nature of Broughton's imagery, walking us through what could be described as a “riverside episode”, metaphorical or otherwise.

A forte for the extended is also present, with half of the tracks clocking in at over five minutes, giving ample opportunity for the intricacies and peculiarities and, yes, a little bit more lyrical amusement, with the eternal lines “A stronghold we claim / Is it a stronghold we've got? / Is it balls. The strategy is theoretically right / But is it right? / Is it balls” being an early highlight of the 6:20 of 'Onwards We Trudge'. It is a track which does indeed trudge onwards, deliberately and laboured, dragging its heavy feet.

If you have a heart, Outbreeding will put it through the gauntlet. If you have a brain, Outbreeding will make you use it. It's a perfectly weighted exhibition of its creator's talents and capacity, both fulfilled. Yet, we know that it is not his first great work and almost certainly won't be his last, but that bar is just a tiny amount higher.