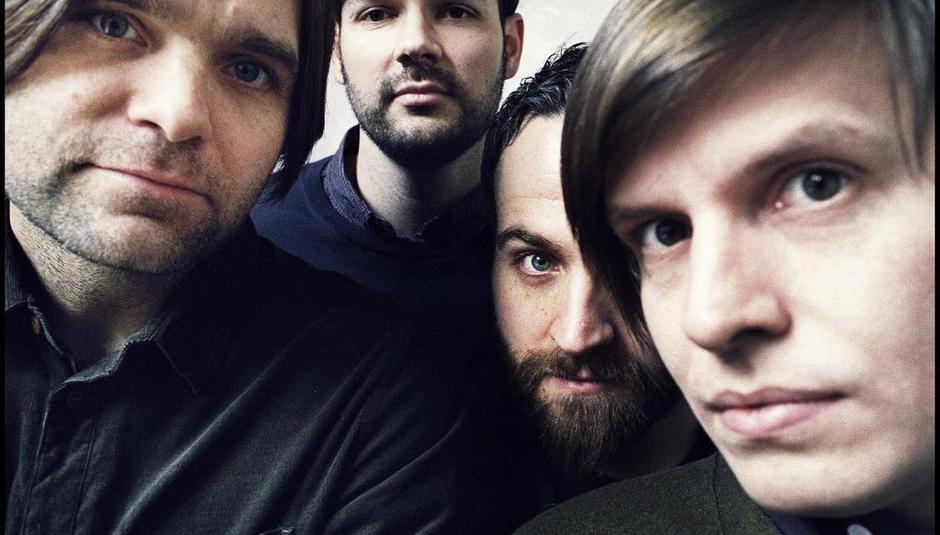 As part of our Death Cab for Cutie takeover, we got on the phone with Ben Gibbard to find out more about their new album Codes & Keys...

To say the past few years have been transformative for Death Cab for Cutie would be an understatement. But you probably already know that. Damn near every piece of copy to bear their name since 2003’s Transatlanticism has hailed the Washington state quartet’s leap from relative obscurity to rampant popularity; a trend that has continued over the course of several years and subsequent albums, not to mention a few nods at the Grammys to boot.

There’s often that horrible fear that the scruffy, rough-hewn qualities that made your favourite band so accessible and personal might be wiped out by the cash-fuelled gloss that – in theory at least – comes with making the leap to more mainstream pastures. But Death Cab have taken to this gracefully over the years, using their exposure and extended scope as an opportunity to push forward and breach multiple boundaries, including those of their fans; a progression that is perhaps most keenly displayed on the forthcoming seventh album, Codes and Keys.

Everything, from the recording process to the lyrics and artwork, is noticeably different. Now, how the final product is judged is truly in the eyes (or ears) of the beholder, but there is no mistaking the individuality of this particular record, even if it does reassure you constantly that it comes from the same creative cauldron as everything before it.

Speaking to Ben Gibbard, the band’s prolific principle song-writer and affable front-man, it’s clear this seventh effort together was shaped as much by physical changes as it was personal or psychological. “Historically, what we would tend to do is go into a studio for a month or six weeks, and really hit it hard the whole time, kind of record the album in one fell swoop” he explains. “This time we decided that we wanted to kind of break it up a bit just change the venue every couple of weeks because I think we found that we tended to kind of stagnate a little bit when we’re in the same physical space for too long. We spent two weeks in LA, and then we took a couple of weeks off, then we went to Vancouver then Seattle, then San Francisco… When we do that I feel like we’re able to open up a perspective on the record that hitherto wasn’t there.”

The band’s last album, 2008’s Narrow Stairs, had a notable sense of space in its production, best showcased by the likes of the chilling 'I Will Possess Your Heart' (below) or 'The Ice Is Gettting Thinner'. With Codes and Keys, these spaces are pushed in different, arguably more interesting ways and coloured in with myriad layers and textures. This lends a considerably more electronic and dense feel to the overall sound of the record, an effect undoubtedly bolstered by bringing aboard the capable hands of Alan Moulder (Smashing Pumpkins, ) at the mixing stage.

“Every record we make tends to reveal itself to us through the course of time”, says Gibbard. “I think certainly there’s a palette of more analogue synths and spacious ambience on this record that wasn’t present on the last one, and that has as much to do with the fact that a lot of the songs I brought in were pretty open-ended. With the exception of 'You Are A Tourist', things like that, they weren’t necessarily attached to a riff or whatever. They were a little more amorphous than they tended to be in the past, so it really gave Chris (Walla), who’s been playing with his new palate of synths, the chance to really go hog wild on it and have fun with it.”

Lyrically Gibbard seems keen to sidestep what has since been described as a particularly dark period, personally when writing Narrow Stairs; feeling unable to control certain aspects of his life, and documenting this uneasiness in often harrowing detail. The changes in his life, and that of the band in the past three years – marriage, births and relocation to name but a few – have obviously shaped his lyrical and narrative scope, but this time round, he found himself pushing for a more simplistic, economical approach, contrary to the often grandiose literary brooding of its predecessor. Though the stories and scenes encountered here are no less significant or rife with meaning, when he sings “Life is sweet in the belly of the beast” on 'Stay Young, Go Dancing', you get the feeling these words are spilling out from much more positive pastures.

Death Cab for Cutie - Underneath The Sycamore by ATL REC

Death Cab for Cutie - Some Boys by ATL REC

“From a lyrical standpoint I’ve been really inspired by people who write lyrics in a much more condense, concise manner”, he explains. “I think that one thing people have liked about the way I’ve written lyrics in the past, and that’s not to say I won’t do this again in the future, is that I tend to be kind of verbose, and I use a lot of big words and stuff” he chuckles, poking fun at his perceived bookishness. “There was a time when I was writing, that the melody was just a vehicle for the words. So, how many syllables I needed in the melody to get the words out, is kind of how it went. I just really wanted, on this record, to kind of push my voice as an instrument and just be a lot more concise with the words. “I still appreciate and aspire to turn clever phrases and to use interesting language but I think over the course of writing songs for this record I found myself asking myself what would Randy Newman do? Would Randy Newman need a lot of words to say this, no, he would just come out and say it.” He laughs, but makes a fair point, particularly when you weigh up eerie similarities to the man on tracks like the jaunty, piano-led 'Portable Television'.

“Now, Randy Newman’s not for everybody but I certainly find him to be an incredibly economical songwriter. That record Sail Away is absolutely amazing and it’s because the lyricism is so to the point. I’ve often found in my songwriting that when I’m sitting down to write a song I spend the first verse setting up the scene, y’know, and then I have to condense everything in the last two verses, and I feel on this record I just wanted to forgo setting a scene and just tell the story.

“I certainly feel that what I wanted out of this record was that I wanted it to be a very hook-driven record. And I don’t mean that in sense of like a radio-play kind of hook. One of the records that we’ve always really loved has been The Cure’s Disintegration, because there are so many hooks on that record and they’re sneaky hooks. They’re hooks that are under everything else, because it’s a very dense record. And I love it for that. It certainly wasn’t a template for this record but there are little guitars that I think are the kind of thing that Robert Smith might’ve… like we were channelling our inner Robert Smith. For me, I felt like I wanted to defer to musical hooks over trying to make grand statements on every song.” Thematically, space, freedom (and lack thereof) and the idea of home play regular roles throughout, loosely linked together as indicated by the album’s title. The title itself comes from a track Gibbard penned early on in preparation for making another record, but its significance has evolved considerably over time.

“I kind of liked that coupling of words and what it connoted. There are codes and there are keys that open doors in life, metaphorically and physically, and not only do they open these doors and passageways but you can also lock yourself within those doors and portals and you can stay safe behind them or have secrets behind them. I think it represents the record rather well because with a song like 'Doors Unlocked and Open', to me there’s all these metaphors about the hustle and bustle of California. But what I really love about the song is that it follows into this major key chord progression of ‘Just beyond the ocean of sound will live free with doors unlocked and open’, like, we will have total communication in all of this noise. I was rather fond of that idea so I think it fit kind of well with the subject matter.”

Critics elsewhere will almost certainly be tempted to drop the M-bomb when dissecting Codes and Keys because by all accounts, it is a ‘mature’ record. It has grown, as have the band since the last time we saw them, but ultimately, everything does over time, and it this point, Gibbard is keen to assert that this is hardly the peak of their abilities, even if they are tremendously proud of what they’ve achieved this time around.

“In reality, it’s another chapter in a book that’s really not over yet.” He affirms in suitably literate metaphor. “This band is a living breathing organism that’s still making music, and I‘m incredibly proud of the record. I feel really good about it. I’m really enjoying playing these songs and I’m hoping people will feel the same way.”