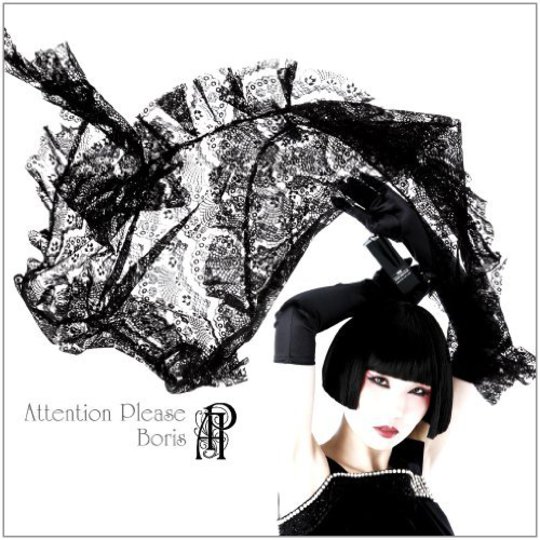 The thing about going about your biz in the way Boris have done for most of their existence, switching styles from release to release with almost no repetition, is that it pretty much ensures you’ll be more admired than adored. Boris have a tangible fanbase, no denying that: larger outside of Japan, their home country, but when they tour the UK next month, they can expect to pull a few hundred souls into most of their shows. And although 90 percent of people who say things like 'forget about trying to sell albums, man, it’s over – merch at gigs is where the real money’s at' are deluded pig people, in the case of Boris they have a point. The three-piece’s frequent sops to the collector market has muddied the waters between ‘avowed fan’ and ‘eBay gannet’. As much as their releases tend to elicit critical praise and healthy amounts of examination, have you ever heard someone claim that any given Boris genre exercise is a high water mark for the genre in question? There might be a decent case for Absolutego, their now-15-year-old debut, being up there as brutal drone-metal epics go, but that’s likely it.

So it is that Attention Please is not the best female-vocalled shoegazey ambient avant-indie record you will ever hear. Nor is Heavy Rocks (released simultaneously with Attention Please, but featuring no thematic links to it, and also nothing to do with the Boris album Heavy Rocks from 2002, even though its front cover is identical apart from the colour. Did you get all that? No? I really wouldn’t worry) as good as it gets for wailing psychedelic riff salad. They are both frequently good, though, albeit in fits and starts that make you think that if Boris didn’t go out of their way to make their releases into desirable artefacts, pretty much everyone would settle for cherrypicking an hour or so of the best stuff, loading up their iPod accordingly and ditching the remainder. Moreover, if you’re a card-carrying fan of this band, they succeed – as they generally do – in stamping their sonic personality across the two albums, no matter how disparate they may sound. Which I’m guessing factors in to why you dig ‘em on some level.

The USP of Attention Please lies in Wata, Boris’ lead guitarist: she sings on each of the album’s ten songs, the first time a Boris full-length has been entirely female-voiced. It would be interesting to know what influence this had on the creative process: that is to say, did the trio arrange and record these tracks in a specifically different way because they were set to feature a woman singing? Arguably, large chunks of the album take on a different complexion and mood as a result: the rumbling, gothic synthpop of the opening title track; ‘Hope’ and ‘Spoon’, both of which sound like one of the rockier joints you find in the middle of a Yo La Tengo album; ‘See You Next Week’, whose dramatic whispering and nth-generation FX fuzz comes off like a redux of Nineties home-recording Bristolians, Flying Saucer Attack. Anyone with a steamy-specced yearning for ‘sultry’ will be rewarded with the bass-throb ambience of ‘You’, and Wata’s breathy enunciations therein.

This isn’t completely uncharted territory for the band by any means – they’ve grappled with shoegaze and the more blissed-out end of modern psychedelia on albums like Pink and Rainbow. Attention Please, as it goes, is probably more accessible than both of those, although when you consider the recourse to semi-formless guitar experiments (‘Tokyo Wonder Land’), it’s all relative. Moreover, it’s hard to see how Boris, having broken through one ceiling – the one separating sludge metal cultists and indie-rock dabblers – in 2005 with Pink, are going to conquer another level and become an actual big-banking heavy rock band like, say, Mastodon. I mention this not because it reflects poorly on them, of course, but because it helps to put into perspective the lot of Boris circa 2011. They can issue overly limited editions which sell out immediately and annoy people; they can carry on making lumbering dark-matter metal oddities which sate their most venerable fans; or they can experiment with styles that might amount to casual fancies, and which sound vaguely like currently in-vogue styles (chillwave, The xx), and continue to be a welcome presence without being central to even their fanbase’s listening habits. Attention Please is only a partial success from this viewpoint, but you suspect that for Boris, it scratches an itch.

Although Heavy Rocks is a palpably different album to its release-day sibling, it also covers a fair amount of ground, and there are moments which would have made perfect sense on Attention Please (and vice versa). ‘Leak -Truth,yesnoyesnoyes-’, despite its stupid title, is one of the less gonzo turns, flipflopping between pretty verses of guitar shimmer and J Mascis-y axe irresponsibility. For most of its 12 and a bit minutes, ‘Missing Pieces’ is nature-green and highly palatable, in a slowed-down ambient metal ballad kinda way – because it’s Boris, though, you get 120 seconds or so of churning noise guitar in the middle. It’s heavy, mind, and if you dig Ramleh or someone, it rocks, so nothing to pull them up for here.

Elsewhere, a squirming mass of oxymorons: ‘GALAXIANS’ and ‘Jackson Head’ are in your face and expansive, equal parts wailing psych and bozo metal. Stadium garage, to coin a genre. These songs are not what you’d call high concept, in a musical sense at least, but holy heck, Wata and Takeshi lay down some immovably great guitar lines on ‘Riot Sugar’ and, especially, ‘Window Shopping’. Lasting a minute and a half and closing the album, ‘Czechoslovakia’ is like a Discharge song without any vocals, and may be a teasing nod to ‘Vein’, their obscure and puzzling attempt at crusty Japanese hardcore. Less immediate, but punishing in its slothfulness, is ‘Aileron’, which is even longer (just) than ‘Missing Pieces’ and unfolds into an endless horizon of shoegazing doom. Aaron Turner of Isis appears somewhere on this album, and in the absence of specific song credits I’m going to take a guess at this track.

It seems likely that Attention Please will earn a better reputation than Heavy Rocks, both in the coming months and once both have had the chance to absorb into the Boris canon. Without setting oneself up as a contrarian, this review is cheerleading for the latter. It’s not immeasurably better or anything, and you have to be cool with feeling like the band are playing silly buggers on occasion, but it’s often more valid for a group to play to its strengths (storming riffs) rather than try and annex new territory (lady-sung oddball indie eclectica). ‘Amplifier worship’, the concept, could serve as Boris’ epitaph, but it’s also how they sound the most alive.