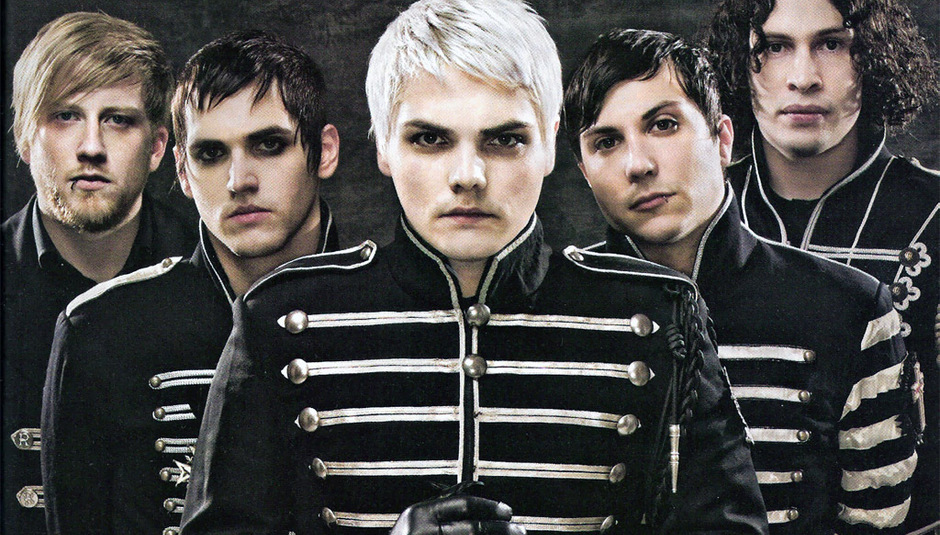 Today should, really, be a day off for New Jersey quintet My Chemical Romance : the night before they played Hammersmith Palais, tomorrow they’ll play second-fiddle to Muse’s ambitious prog-rock in Edinburgh before then entertaining muddied attendees at the Reading and Leeds festivals. But there’s no rest to be had: a new album’s on the horizon, and there’s press to attend to. For an entire day.

Gerard Way – the band’s vocalist, whose glossy black locks have now been shorn, almost military style, and bleached white-blonde – yawns after only five minutes in DiS’s company. He apologies immediately, explaining that the band’s promotional work began at 10.15 in the morning. It’s now gone eight-thirty in the evening. His bandmates sit around him in a west London hotel room: Gerard’s brother, bassist Mikey Way, remains silent throughout, and drummer Bob Bryar curls up on a sofa, visually shattered. Only guitarists Frank Iero and Ray Toro can muster enough energy to occasionally contribute to the band’s final interview of the day, one that arrives on the back of an afternoon spent talking to the German rock press.

“It’s the record of our dreams,” says Gerard of My Chemical Romance’s third album, The Black Parade , due for release in October. The title’s been a badly-kept secret for weeks. “It’s a record that you want to sit down with – you want to listen to the entire thing. Conceptually, I believe, we’ve finally hit what we wanted – even with what we got to say with the record, it’s what we wanted to say.”

Something that the band repeatedly stresses during DiS’s allocated time is their desire to bring theatrics back into rock music. It’s something they dabble with on stage at the Hammersmith show – an announcement is made prior to their performance, saying that MCR will not play; instead, they’ll be replaced by The Black Parade. The kids in the crowd, of course, knew what was up.

"There’s a pageantry to rock that’s been missing,
and that’s the ambition on the new record."

“We did it with full knowledge that when the announcement was being made, the kids would kind of know what the deal was,” says Gerard. “There was a little bit of theatre to it, yeah. You listen to this new record, and there’s that kind of ambition on it – it’s the ambition of hopefully bringing rock to that place where it’s majestic again, where it’s theatrical again. There’s a pageantry to rock that’s been missing, and that’s the ambition on the new record.”

DiS gets to hear half-a-dozen or so songs from The Black Parade prior to our rendezvous with the group. Where it does improve upon its predecessor, 2004’s breakthrough release Three Cheers For Sweet Revenge , is in its coherency and flow – songs fade in and out of each other, with a specific narrative running the record’s length. You’d call it a concept record, progressive even, but that’d be potentially misleading: it still sounds like a massively commercial rock record, one that owes more to Queen than any contemporary emo act.

“I don’t think it’s ever a conscious decision to write mainstream songs,” says Gerard. “In fact, I think some of the structure is the opposite of mainstream structure, but the idea was to directly affect people in a larger way, in a more direct way. That was the objective with this record – we wanted to cross over to, like, many people, so that this affects lives, lots of lives.

“There are strings and horns and a marching band on the new album,” continues the singer. “We got a big toy box, and got to do what we want. We got everything in our arsenal that we wanted, but luckily we’ve a sense about ourselves that stops us being self-indulgent, so we used just enough – well, that’s what I feel. We went a little over the top, but never to the point of boring people, I think.”

The proof, of course, will be in the proverbial pudding. For the first time in their history, My Chemical Romance will release a single prior to its parent album: ‘Welcome to the Black Parade’ is the taster in question, and its video led to an incident that was widely misreported across the music press.

Gerard laughs, rocking his head back onto the sofa – we’ve not even said ‘burns’ or ‘car crash’ yet (click to see how DiS got it wrong, too). “The internet can actually work against you,” says the singer – My Chemical Romance were one of the first bands to really benefit from internet coverage prior to their signing with a label, major or otherwise. “The minute you don’t want to talk fully about something – say you have to cancel a show – then all of a sudden the internet answers it for you.

“We get a lot of young kids at our shows,
and when there’s a rush, little kids will fall."

“The reason we didn’t want to talk about it was because we were filming a video,” he continues, “which goes back to that secrecy thing. So all we could say was, ‘Hey, we’re hurt’ . And then suddenly we’re in a car accident? We were just filming two videos, back to back, and the second was really intense and involved lots of fire, and a couple of guys got hurt. We tried, against doctor’s orders, to rehearse for our Street Scene show in San Diego, but the hospital said, ‘You shouldn’t be walking, the two of you’ . So we wrapped that up and went to Japan, and we were okay for the most part.”

The injured individuals – drummer Bryar (suffered burns to his legs) and Gerard himself (torn ankle ligaments) – seem well enough now, but the cancelling of their Street Scene Festival appearance meant that they missed witnessing a crush during Tool’s headline set. Some fifteen people were injured in the incident, which DiS reported here. “We get a lot of young kids at our shows, and when there’s a rush of kids, little kids will fall,” says Iero. “We’ve had that hardcore education, but these kids haven’t, and we try to tell them that once we know where it’s likely to happen to get out of there, as people are gonna fall into them and over them.”

Gerard’s suddenly giving the matter his absolute attention. “That’s a good point, as we’re very experienced in that kind of situation,” he says, leaning forward and out of his relaxed, lounging position. “We were schooled, basically, on Warped Tour, and we’re very observant about that stuff. We stop songs in a heartbeat – it doesn’t matter to us, as if we kill the momentum we know how to get back into stuff. We’re good at it now, actually. You have to work with the security, and the second you see a large hole open, that’s when the crushing will start, and you have to pay attention to that hole. If it doesn’t fill up with people again, as in people standing up, then we have to stop. So you have to be very conscious of that. A lot of bands don’t know what to do – they’re like, ‘Whatever, it happens, let’s keep playing’ – but you should stop. You need a really good security team, but the kids will also communicate with me, and you’re able to read mouths and see if people are panicking.”

The band’s young audience is a concern to know-nothing sorts who’ve been campaigning against the alleged persuasive nature of rock music for what feels like forever. Only recently, in August 2006, The Daily Mail ran an article warning parents of the ‘New Emo Goth Danger’ – those are exact words they used, and the piece can be read online here. One of only three bands mentioned in the piece – bands that apparently encourage behaviour such as self-harm – was My Chemical Romance. Gerard doesn’t know whether to laugh out loud or cry silently to himself.

"Papers like that will never do their homework, but it is kind of funny to call it ‘emo death cult’, or whatever it was called."

“The funny thing is that I’ve met more kids that have stopped self-harming because of us, than anything,” he says, his face masked with absolute seriousness. “That’s the case with most of the kids I meet, especially in the UK, so I guess it is some sort of epidemic. Most of the kids that I meet, that say thank you, are kids that used to self-harm. Kerrang! was involved, as one of their readers wrote in about it, and I ended up having a very personal discussion with this girl. I noticed she had all these cuts, and it really bummed me out, and I was hoping that she didn’t feel that she needed to do that in order to come to the show. And I ended up meeting the girl and her mother – the mother had written a letter to Kerrang! – and she said because of the band she’s now stopped doing that. Papers like that will never do their homework, but it is kind of funny to call it ‘emo death cult’, or whatever it was called. ‘New Emo Goth Danger’?”

Iero cackles: “Ha! I like that! That’s the title of the next album, New Emo Goth Danger !”

The matter raises a final point, though. My Chemical Romance are superstars nowadays, playing to thousands of kids – and we do mean kids – at each and every show they play. They must come in for a lot of stick from right-wingers who haven’t taken the time to realise that the band’s fantasy-horror lyrics are just that: fantasy. The music's immediate and the lyrics fun: there are no hidden messages calling for kids the world over to scratch their best friend's eyes out. Sure, the five-piece have posed for photo shoots covered in fake blood, playing-dead models lying at their feet, but that doesn’t make them a bad influence. They just like, as has already been mentioned, playing it up, theatrically.

“We live in a very sick bubble, made of concrete and bullet-proof casing,” says Gerard. “If you acknowledged all the ignorant stuff you heard, you’d never sleep, we’d never sleep. There’d be no time. I gotta say I’m not a fan of that Jay And Silent Bob Strike Back movie, but it has one of the best scenes I’ve ever seen. They literally go around to peoples’ houses that have talked shit about them on the internet and give it back to them. It’s the coolest thing in the world.”

Bloggers of the world beware: My Chemical Romance have your name, your number, and now they’ve quite probably got the money to order a hit. Or at least arrange for someone to unplug your broadband connection.

The Black Parade will be released via Warners/Reprise on October 23 (in the UK; October 24 in US)