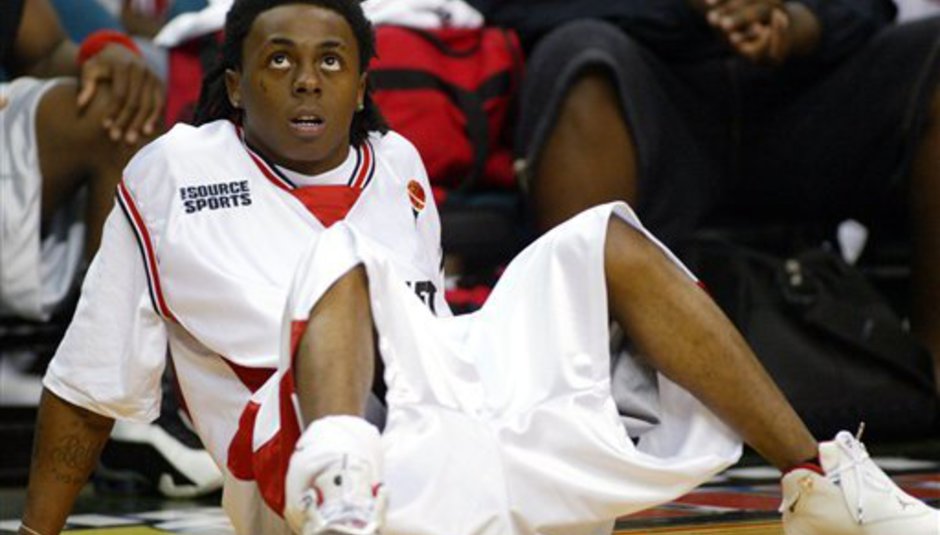 Yo. This week's 'content in the form of a playlist' Spotify playlist is here, so I'm gonna cut the crap and just get to it. Go here to get this week's Spotifriday playlist.

P.S We've just this week linked up with Spotify, to feature a monthly playlist on their blog. Click here for this week's one, and keep 'em peeled for more.

A nice easy one to start us up this week, although, again, this technically happened last Friday, but AFTER the all-important Spotify-cutoff deadline, so is still legal and legitimate. Panda Bear, alias Noah Lennox, of Animal Collection, revealed that his new record would be called Tomboy. As much as we wish it's going to be as good as Person Pitch, it's not going to be. Is it?

We had similar thoughts for Midlake, too. First album = very well done, give yourself a hard-earned pat on the back. Second album = it can't be as good, can it? Well, it got eight out of ten, which puts it on a par with The Trials Of Van Occupanther. This track does everything you'd expect a Midlake song to do, meanders beautifully, gets a bit beefier and then leaves you feeling a touch sad.

Our boards do make a great effort when it comes to polls, especially recently. We've had running the survey to find out the most popular album of the noughties among our readers and Arcade Fire's Funeral won it, beating everything else to a pulp. Unfortunately, it's not on Spotify, so we had to go with its poorer brother in Neon Bible, specifically 'Black Mirror', which features on an advert at the moment.

Kid A also featured in the DiS Users' Poll of The Noughties. Where did it come, though? Second. Our users got things tragically wrong on this one, I'm afraid. Or the ones who voted for Funeral over Kid A did, in any case.

From one blippy-bloopy track to another, Pantha Du Prince release Black Noise on Monday, and we reviewed it here giving it NOT QUITE the whole ten marks. I think a nine is more aesthetically pleasing, though. You can also stream the whole album _in_ the review! I know! Technology these days.

My mind is as made up as it can be about anything that it's not possible to better the theme tune to Twin Peaks. Mr Thomas Truax makes a pretty good fist of it, however, with his pseudo-croonings and measured crescendo, leaving things on a more upbeat note than the original, despite all that killing of beautiful young girls. TT was confirmed for the Glasgow Music And Film Festival this week where he'll play Songs From The Films Of David Lynch.

First track of the Weekly Singles Column. This is weaker than a can of Carling, isn't it? Also about as much fucking use.

This starts off like a Metallica song. Then gradually descends, note by note, into a trough filled with sloppy faecal matter. Hopefully shit like this means Obama stops namechecking him. We reviewed the new Lil Wayne LP, Rebirth.We didn't think much of it.

Le Tigre with their gibberish classic. The band this week confirmed that they'd be working with Xtina on her new record. I browsed for a few minutes to try and find a suitable song from Aguilera to shove in here, but thought better against it in the end. Not that I have an image to uphold or anything. I don't. 'Ain't No Other Man' is still a banger, though.

Noisy, brash and admirers of three part harmonies. Sounds like a fair mission statement, and it is. Vivian Girls finished off their UK tour earlier this week with a show at a Scout Hut somewhere in East London, as well as playing Hoxton's Bar & Kitchen, which we duly took some photos of.

Speaking of those three-part harmonies, Field Music made it their party trick, though in a slightly more relaxed manner than the aformentioned VG. We were lucky enough to catch them at New York's Bell House this week. This really is about as pleasant as it comes.

This is the last time this will feature in any Spotifriday playlist, I promise. It's with good reason, though, as Brooklynite trio Yeasayer had their new one, Odd Blood, reviewed this week. The conclusion (paraphrased) was: "Yeah, quite good, more consistent than the first, but they have more to offer. 7/10."

Thomas White's a good young chap who's played in a hundred or so bands, including Electric Soft Parade, Brakes, Patrick Wolf as well as all that solo work under his own name. His new release, The Maximalist hits shelves in a couple of months, but in the mean time, watch the video for the first single of it and/or listen to the self-titled track from 2007's I Dream Of Black.

This easily contains the most energy of any song on this playlist, it also reminds me a bit of Toy Dolls. I dunno why, 'cos they sound nothing alike. We reviewed HCDP's brand new album here.

Now, Spotify seems to think that 'Leash' is spelt 'Leesh' in this case. I am nearly 100% sure that this is not true, and the case of the curiously spelt song strikes again. I've had a throat which has caused me much pain this week and perhaps the only redeeming factor of it is that it's now almost possible to sing along, in tune, to Magnetic Fields songs now. That and doing Roger Moore impressions on the phone to my Mum. 69 Love Songs will be re-issued on deluxe vinyl later in the year.

It doesn't kinda sound like he's singing 'Habib Beye' instead of 'be brave', but I think that's just my football-chant tuned ears. Any others of you hear it? It's also Single Of The Week.

Never let it be said that I don't end these playlists on extended rap-jams. Never. Now, Def-Jux was rumoured to be folding in previous weeks, however, this now turns out not to be the case. It's merely going on hiatus. Truth be told, the first half of this track is a bit wack. Second half is where the good stuff happens.

Click here to get an archive of ALL of our Spotify-related content, including all 32 of these, mixtapes, end-of-year's and god know's what else left over.

The rest is noise: Throats' guide to ...