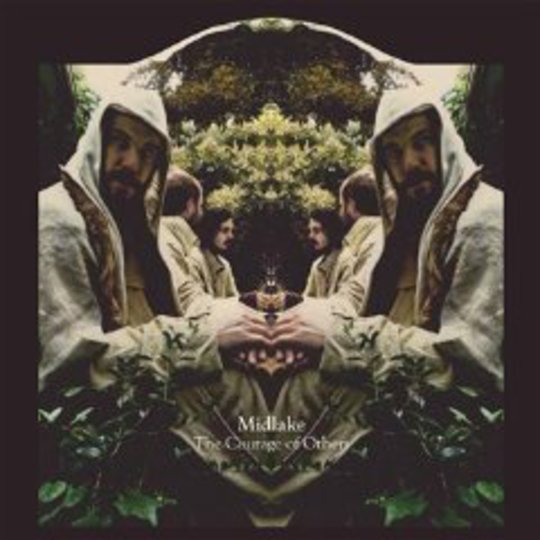 Before getting stuck into The Courage of Others: a moment to consider Midlake’s second LP, The Trials of Van Occupanther (2006). Undoubtedly a breakthrough of sorts, from the heady vantage point of 2010 it’s easy to forget that it was far from an instant success. A smattering of positive reviews emerged in its wake, sure, but other factors significantly played into its current status as something of a cult favourite.

The enthusiastic patronage of one Jason Lee helped, but arguably of most import was the slow-burning nature of the album itself. Unquestionably lovely as it is, it’s hardly one to grab you by the lapels and holler greatness in your ear. On the contrary, it is a masterclass in crafted repose – repeated listens and time spent in its company yielding considerable reward. Thus, by the time the band came to play Latitude’s main stage a year later, their (surprisingly muscular) set was greeted with adulation by more than a few, and the overwhelming sensation was one of a band teetering on the brink of greatness; an old-fashioned success – strong melodic chops matched by plain finesse and some simply fantastic songs.

The intervening years seem to have been quiet ones for Midlake as a collective, finding them variously contribute to others’ albums (including those of St. Vincent and Regina Spektor) and in guitarist Eric Pulido’s case, even establish a coffee business in their hometown of Denton, Texas. Not to say the group has slipped from their periphery: boning up on late Sixties British folk has proved a major pastime of bandleader Tim Smith, and the quintet have purportedly spent countless hours in the studio assimilating these influences, taking care not to produce a record that follows the same beats as its predecessor. As Pulido succinctly explains: “We didn’t want to make the same album as Van Occupanther.”

It’s to their credit, then, that they’ve done nothing of the sort. Where that album cut great swathes of melancholy across Seventies soft rock, Courage... is a denser, altogether knottier affair, seeing the band take those trad-folk cues and really (like, really) run with them. Check that Druidic artwork! Cop those omnipresent flutes! The ghosts of Fairport Convention, Nick Drake – and most tangibly, Pentangle – loom large throughout, but it’s by no means a clumsy integration. Sinuous guitar lines permeate this record, lining up next to said flutes and Smith’s plangent, multi-tracked vocal to wonderful, bucolic effect. From the get-go, it’s an extraordinarily well-wrought piece.

It also shares with the band’s earlier material the same, pervasive sadness. A resolutely minor key offering, it’s even less instantly gratifying than before, precipitating its one central flaw: that these songs unfold at a leisurely pace – growing in stature as they progress from unassuming beginnings to sweeping crescendo – is admirable, but a touch overwhelming; even a little daunting on first exposure. Such is the apparent air of dourness you’d be forgiven for scurrying back to the likes of ‘Roscoe’ or ‘Young Bride’ (or scouring the internet for some vacuous pop thrills) (ahem), for there’s nothing here quite as simple, or serene.

When it all comes together, mind, the results are mesmerising. Consider the clattering spirals of ‘Bring Down’ (which boasts a fine guest vocal from labelmate Stephanie Dosen); its title track’s movingly frank admissions; the tranquility that seeps from ‘Fortune’; ‘Acts of Man’’s languorous groove. Though focusing on any single facet of Courage errs towards the counter-productive (it is a wondrous, wintry whole after all, and demands to be taken as such) Smith is lyrically more direct than ever. Over the course of these 42 minutes he ponders “a way of life that is common for all”, worldly highlight ‘Rulers, Ruling All Things’ finding him deliberate guilt and solitude to highly affecting ends.

If it feels odd that a band such as Midlake seem poised to follow their ‘breakthrough’ record by actually breaking out with something as dark, strange and bewilderingly out of step as The Courage of Others, it’s worth remembering that Van Occupanther itself was a marked departure from the psychedelic leanings of debut set Bamnan and Slivercork; similarly oblivious to and unconcerned by its unfashionable nature. Moreover, this is a band that never make a great deal of sense first time round.

Rather, they actively strive for development. Never mind that they accomplish this via harvesting so much from bygone eras; in honing and maximising their sound so adeptly, there’s little separating them from the Radioheads, the Björks, the TV on the Radios or the Animal Collectives of this world. So, it shouldn’t feel odd at all, really. It should feel like a victory.