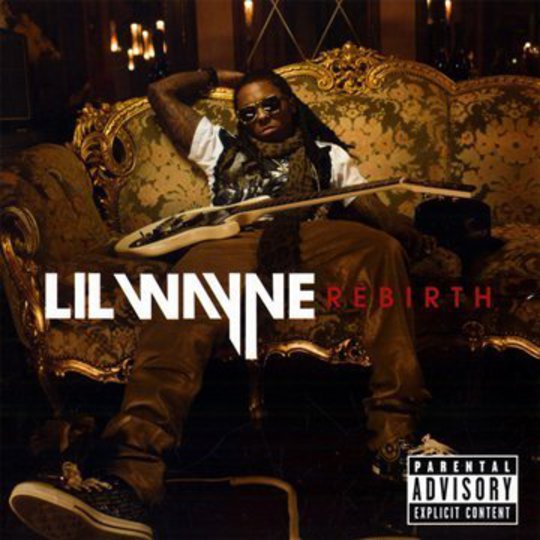 ‘American Star’, the opening track on Rebirth, with its “Born and raised in the USA” refrain, at first calls to mind the stars, stripes and ticker-tape strut of Apollo Creed in Rocky 4. We are a long way from backpacker rap here. Lil Wayne embodies everything that rap has come to see the American dream as, coming from the piss poor background in New Orleans, getting where he is today in spite of it. Such determination to reach the high-life leaves few proponents unaffected though, and Wayne’s broad brushtrokes of vocoders and admiration for crunk flirt dangerously close to the kind of obsolescence which has begun to hang around the neck of hip-hop’s biggest stars of late, ‘Paradice’ being one such instance of Wayne’s tendency to let himself down by slipping into radio-friendly unit shifter mode. Since the time when syrupy R&B became the only term on which the charts would allow rappers entry, there have been as many successes as failures. For every Kayne and Jay-Z creating innovative shapes from this new-school template, there has been a 50 Cent or Nelly, making music itself seem like a dubious proposition.

With his last album, Tha Carter III, Lil Wayne rose right to the top of the pile of leading figures in this battle between creativity and profit for hip-hop’s soul. So now, Wayne is the kind of megastar who labels give cart blanche to do exactly as they please, safe in the knowledge that whatever the result, it will probably still sell by the truckload. His response is to make a rock album. Cue sharp intake of breath over clenched teeth. It’s hard not to have the feeling too that Universal don’t have the upmost confidence in this record - the release date has been shifted about a goodly number of times, while the press release offers few specifics about Rebirth, not even trumpeting the collaborations with Eminem or Travis Barker from Blink 182. Instead it contains a side of A4 reminding its target of how awesomely influential Lil Wayne has become, how good Tha Carter III was, and how 2010 will be Lil Wayne’s year. The only problem is, Rebirth provides precious little evidence of why.

‘Ground Zero’ opens with one of the most interesting guitar riffs on the album, and Wayne rises to the challenge nicely, bringing the schizoid weirdness that suits his unusual voice so well, lyrics such as “say my name baby pull my hair, and I’m a fuck you like a bull I swear, I got a lot of love that I could share, I got a lot of drugs that I could share” lend a tasty air of menace to the chorus line of flange-treated “J-J-Jump out the window, l-l-let’s jump off a building baby”.

‘Da Da Da’ is another piece of meandering weirdness, juxtaposing metal riffs and funk which manages to rouse Wayne into actually producing a decent rap, instead of the strangulated warbling which characterises mush of the rest of the record. ‘Drop The World’, the track featuring Eminem, doesn’t reach those heights, at least not on Wayne’s part. When Eminem comes in he switches the tone from grandiose nonsense about smashing the world to a verse more commensurate, with a song featuring two of the most lauded MCs around. Outside of Eminem’s contribution, ‘Drop The World’ is deathly dull, three minutes of plinky synths which achieves depressingly little.

‘Knock Out’ features the kind of emo guitars which sound like a million records you can’t place, but definitely know exist. The R&B vocal adds a further level of schmaltz, but things liven up slightly with a female rapper coming in after the second chorus and spitting a riposte to Wayne’s assertion of being a ‘knock out’ in bed. “Once you go black, you’ll never go back”, says Carter, “Ah fuck it, give me that damn bucket, when I fall this pussy you’d better not start ducking…grab him by his locks and give us a good box” comes the considerably more interesting (yet uncredited on the review copy of the album) reply. Think of a slightly less charismatic Amanda Blank and you’ll have a pretty good picture of the mystery woman with attitude. Rebirth could use many more moments like this.

‘The Price is Wrong’ opens with a bit of nu-metal shittery, which to be fair suits perfectly Wayne’s ridiculous verse about a girl who dumped him in high-school. Apparently, now the joke is on her because he has become big enough to phone in tracks like this and still have a bunch of label suits tell him its genius. Lil Wayne’s status and influence is now clearly working against him, the choice to release a rock record has backfired, yet obviously no-one has had the guts or inclination to tell him that the overblown choruses and riffs of Rebirth drag him away from the in-your-face lyricism and unorthadox flows that he is best at. The things that distinguish him from the legions of rappers from disadvantaged backgrounds who would do anything, conform to any worthless musical trend if it meant they could take his place. Lil Wayne has earned his time in the spotlight the hard way, but it’s hard to view Rebirth as anything other than resting on his laurels.