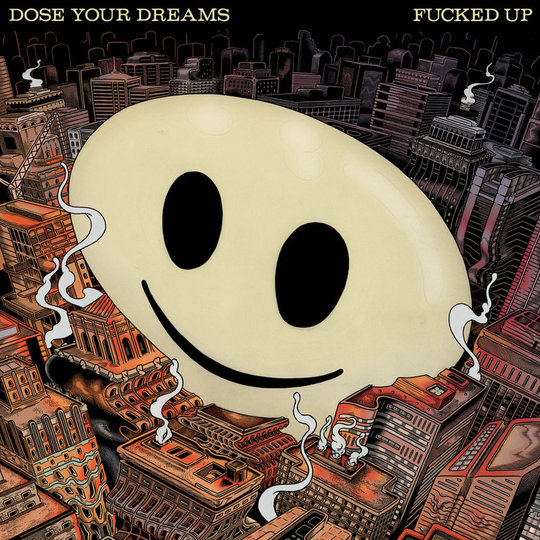 In 2011, Toronto punk sextet Fucked Up released their, until then at least, ‘rock opera’ opus David Comes to Life, a record met with universal acclaim, that brought them as wide spread attention that their name and sound will allow. It pushed them beyond their relatively humble beginnings from the Toronto hardcore scene, though honestly, they had been doing that almost immediately from their inception, proved by their debut full length Hidden World. In between those albums they have released two other, less concept heavy full lengths, the former, The Chemistry of Common Life bagging them the Polaris Prize in 2009, as well as a slew of singles and compilations including their epic Zodiac series.

However, in recent years the band went quiet. After 2014’s mildly disappointing Glass Boys LP the band went off to do other things – such as frontman Damian Abrahams' wrestling TV show for Vice – and bar a celebration tour of Hidden World and the Zodiac singles, seemingly the band were winding down in the public eye. In fact, guitarist Mike Haliechuk and drummer Jonah Falco, who was in-between living and recording bands like Sauna Youth in the UK, were over a two year period constructing quite possibly their greatest work yet.

Dose Your Dreams, Fucked Up’s fifth full length, is by some distance the most diverse, challenging but ultimately rewarding release they’ve ever attempted and by their sheer dedication to the craft, have managed to pull it off. The album starts from their base punk rock sound as a jumping off point to explore disco, electronic, industrial, krautrock and psychedelic rock all while deliver a healthy dose of anthems as they pick up the titular ‘David’ story from their previous rock opera. But as impressive a work as David Comes to Life was and still is, its singularity can make it a challenging listen, especially in its later stages. Here, however, the band, led by Haliechuk, have managed to create something that still retains all their punk energy and install it into a fully fledged universe that we are introduced to through the album’s myriad sounds and characters.

We begin with a single piano line with a melody reminiscent of the opening notes of ‘Let Her Rest’, musically returning us to the world of David, who after our last adventure with him is now working a mundane office job in ‘That Ain’t Your Business Man’. That is, at least, until he encounters sorceress Joyce Tops (‘Raise Your Voice Joyce’) who takes him from his unfulfilling life and onto a journey of self–discovery and love, though not without its own costs as he nearly goes mad in doing so. At least, this is what one can gather from the “narrative” here, but that’s not crucially important to enjoyment of this record. Instead, as is often the case with Fucked Up’s output, it is to just allow one to be fully enveloped by the mad world Haliechuk and co have created here, as they shift from genre and mood to create a rare fully sensory experience.

One of the album’s most notable aspects is the amount of voices that make up its narrative. Frontman Abraham is still, largely, the central player here, but he is no longer the record’s sole focus in terms of vocals, especially in the album’s second half. Haliechuk and Falco take lead for the first time and both do stellar jobs, especially the former on stand out track ‘The One I Want Will Come For Me’. Meanwhile, John Southworth (‘Normal Peoole’) and J Mascis (‘Came Down Wrong’) provide excellent guest turns. However, most notably is the amount of female vocals present on Dose Your Dreams something particularly prescient given the album’s accompanying Raise Your Voice Joyce compilation which is entirely female vocal led. Fucked Up have always used female vocals to counter balance Abraham’s gruff style, most famously on ‘Queen of Hearts’. However, here they are an equal part of the experience, sometimes in the lead role such as Jen Calleja of Sauna Youth or Miya Folick on the album’s incredible closer ‘Joy Stops Time’, a track about sexual climax to accompany this record’s musical and emotional climax. Incredibly this adds a new and exciting layer to Fucked Up’s well known sound, as the various voices match up to the various music styles explored across Dose Your Dreams.

Still, this isn’t to downplay Abrahams continued importance as the lead vocalist of Fucked Up, even if he’s taken a slight creative step aside to allow the band’s sound to grow. He is still every bit the band’s lifeblood and mouthpiece, giving extraordinarily good performances on the hard rock jam ‘Normal People’ or in the album’s heaviest moment ‘Accelerate’ he shares vocal duties with guitarist Ben Cook who between them navigate the most lyrically complex track expertly. At the album’s heart are two anthems that Abraham breathes vitality into on ‘Living in a Simulation’ or the excellent ‘Don’t Wanna Live in This World Anymore’, a song that is sure to become a staple for the band’s live shows going forward and surely couldn’t be voiced by anyone else.

Dose Your Dreams is an incredible piece of work that at the very least rivals their previous bests, if not surpassing them. That is an extremely high bar to clear but they’ve managed it, purely by their never ending desire to keep pushing themselves and their music forward with confidence and a swagger that hardly any other act in recent times has managed to maintain. Owen Pallet returned on this record to record the album’s string parts and called it ‘their Screamadelica' which is a bold but justified claim. A record this willing to go the absolute distance to challenge expectations yet entertain and move so consistently should equally be heralded in such high regard, which in time, this will.