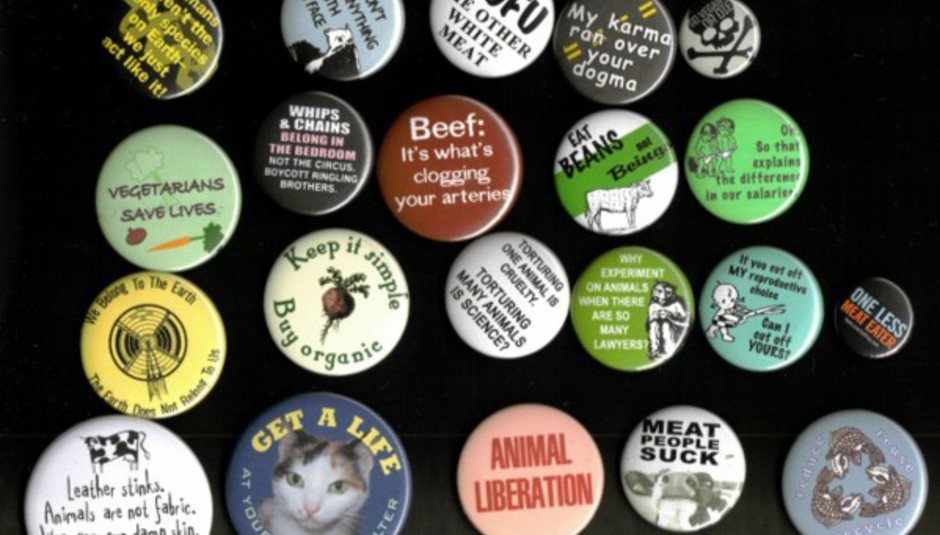 When DiS chatted with No Age, it was clear that there's one subject entwined with the spirit of the band that doesn't seem to have much to do with music but has a lot to do with the men behind it. We asked Dean and Randy to share some thoughts on what goes into their bodies and how they deal with this life choice in their line of work...

Why I went, and why I am STILL vegan

As a kid I loved animals. Not enough to not eat them though, I didn't really think of the relation of food to animal, animal to plate, plate to stomach.

When I was 15 I went vegetarian, and when I was 16 I made the switch to being vegan. This was 1998, before fake meat was at every grocery store, before the Whole Foods takeover, and before most people knew what "Organic Produce" was or what the word vegan meant.

When I made the decision to switch, it wasn't an easy one. Being on a diet that basically replaced meat with cheese, I needed to figure out how to get by. Don't get me wrong, I was thrilled with my decision because my new life style fit in line with what energy I wanted to send out into the world. When i learned about factory farming, the Dairy industry, hormones, veal, E coli etc. it was easy for me to maintain my stance. My parents were supportive, We generally ate pretty healthy and being Vegetarian themselves before I was born, they understood my cause and my need to explore it.

I knew nothing about cooking and nothing about nutrition, I was more concerned with finding a vegan belt than making sure i got enough Iron, B12 or omega fatty acids. As time went on, I slowly learned what i could eat, what I like to eat, where I like to eat and shop and which food made me feel good.

Being vegan has been an ongoing enlightening experience for me. I feel good that I do not contribute to the meat and dairy industry, that I do not spend money on fast food and that i am looking out for my health, the environment and animals.

If you told me when I was 15 that I would be eating Kale and seaweed salads, fresh fruit and vegetables, brown rice and tofu, Ethiopian food, Vietnamese food, Agave, Flax oil and loving it, I may have laughed at you. Being vegan is such a personal journey and I would recommend anyone to try it out and see if they like it. I crave REAL food, not processed sugar and burgers, not shakes and cookies but salads and fresh whole foods. I never thought that would happen, but it has and I love it.


Learn more about No Age at peta2.com.

Randy Randall gives us his guide to being a touring vegan

Dean and I are both Vegan so finding food on the road can sometimes be a challenge. We have been touring together since 2002, so we have had some time to think about what the best options for finding Vegan food are.

Super Markets are a Vegan's best friend. No matter where you are in the world if you can find a super market or some type of produce stand and you can either understand the language or you have somebody with you who can translate, you will never go hungry. Super Markets offer the quickest cheapest ways to get a quick healthy meal.

You can pick up a variety of raw fruits, vegetables, and nuts guaranteeing you we have some type of vitamin and mineral intake for the day. Also, depending on where you are in the world or country you may be able to track down a health food store or local Co-op. Obviously these are not in every city but if you ask around the venue where you are playing usually someone will know where one is if there is one in the city you are in. If you are able to track down a health food store then you will be on easy street, so many tasty vegan treats await you there. Most health food stores offer some kind of deli selection with hot and cold food options. You can stock up on snacks for the van. My favorite are Hav-a-chips

This is a no brainer! On tour I am always using an App for the iPhone call Vegan Steven.This app lists any and all restaurants with vegan options where ever you are.

Some of our favorite vegan friendly restaurants in major cities are:

Falafel!!!
After a show we usually load the van and we are starving. Not many restaurants that are open after 2am have any vegan options, so we try to track down any late night kebab shops that serve Falafel. We found an awesome Falafel spot in Paris called Las Du Falafel

Subway
When we are on long drives in the states there is always a Subway sandwich shop somewhere off the highway. When we are starving we will stop at a Subway and get a vege delite sandwich with no cheese and no mayo. It is not the greatest but if is food.

There are also some great finds at roadside mini marts like Boots. Dean likes to get the hummus and carrot sandwich they have at Boots.