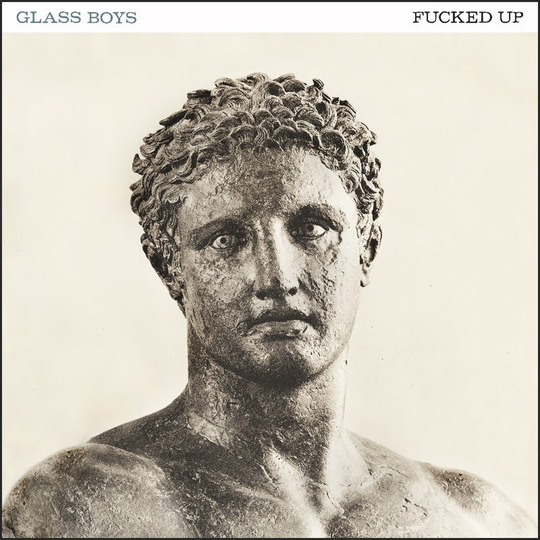 There's an argument that Fucked Up should no longer exist. Oddly, it comes from their guitarist Mike Haliechuk, who noted in a recent interview that hardcore bands come with a short life expectancy. 'If you've done it right, you have a good decade, and then someone else does it. That's the way it should be.'

Time features as its own instrument on the Canadian outfit's fourth album proper in 13 years. The very title suggests fragility, the 'Glass' the kind that houses grains of sand, their movement marking then from now. Where 2011's brilliant but exhausting David Comes to Life presented a twist-filled musical of fictional ill-fated revolutionaries, Glass Boys is less narratively ambitious but arguably more sentimental. It looks inward, asking hard questions. Are we relevant? Do we matter? Is anybody listening? The kind of questions that we eventually mull over as a sense of mortality arises. Where Haliechuk and his cohorts are concerned, the word 'still' can be inserted into each musing. Until now, people have listened. They've been given good reason to. Will they continue? Should they?

Every band hits a point when funeral arrangements become a conversation, but Fucked Up have never been, nor will ever be, 'every' band. Case in point - Damian Abraham. "I'm an echo!", he growls with that voice as 'Echo Boomer' takes hold, ushering in exactly the kind of powerhouse adventure you'd expect, regardless of how much older and wiser our subjects may be. Though the words are credited to Haliechuk, Abraham is the conduit. He is a tempest, armed here with strict focus. He surveys the landscape and accepts Fucked Up's lot - to a point. Time will see others come, others with voices as big and bright and brash as Abraham's, this much is inevitable. 'Touch Stone' stretches the thread, Abraham again voicing the nature of significance, or lack thereof. "You're the source, I'm the echo. Be the new stone when I let go.". Moments later, 'Sun Glass' finds him snarling that "We all get replaced, retconned and upstaged,". But this is not a passing of the torch. Not yet. It's not time to let go.

Glass Boys is no white flag, either. Those first three declarations are as fevered as anything Fucked Up have thrown at us before. Not to mention tight. Abraham initially wanted another epic; a double album split down the middle, one part his, one part Haliechuk's. The guitarist felt differently. Abraham would relent (though both would still end up splitting the difference), resulting in a lean, direct 40-odd minutes that greatly benefits from not overstaying its welcome. Whether you wish to read this record as a defiant last stand or not, it is definitely an assault. Sure, Abraham's vocal style guarantees an intense outcome, but Glass Boys drives forward, constantly questioning. It's not about sniping at the next wave, rather shining a light on home truths, such as how to juggle families, bills and stay hardcore in an evolving arena.

'Warm Change' overplays the hand a little while 'DET' reveals cracks, the focus shaking, the punches not quite connecting, a rare example of Abraham screaming into the void. At times on Glass Boys, the production swarms him a little, muddying waters best left clear. It feels a tad unfair to highlight it, and it's by no means a deal breaker, but there's a noticeable dip in audio quality between this and David Comes to Life. The likes of 'Paper The House' and 'Led By Hand' shake off such concerns, the former crackling with the kind of electricity found on 'Queen of Hearts' and 'The Other Shoe', the latter boasting a rousing turn from J Mascis, the Dinosaur Jr. man bouncing off Abraham like he was always there. The title track brings solemnity alongside a bittersweet, perfect conclusion, Haliechuk and Abraham sweetly detailing the difference between acceptance and resignation against the album's strongest arrangement.

Though that acceptance comes with a hint of finality, a record this searching and honest feels like we should celebrate the journey above the destination. As Abraham remarks both plaintively and painfully with Glass Boys just minutes old, "So in the end, when the song starts to fade, I'm just the boy in the middle of the wave. Not gone, only changed." Not gone, only changed. When Fucked Up choose to call it a day, that way of thinking will be a fair reflection.

Incidentally, an alternate version of Glass Boys exists, one in which all songs unfold in half-time. Natch.