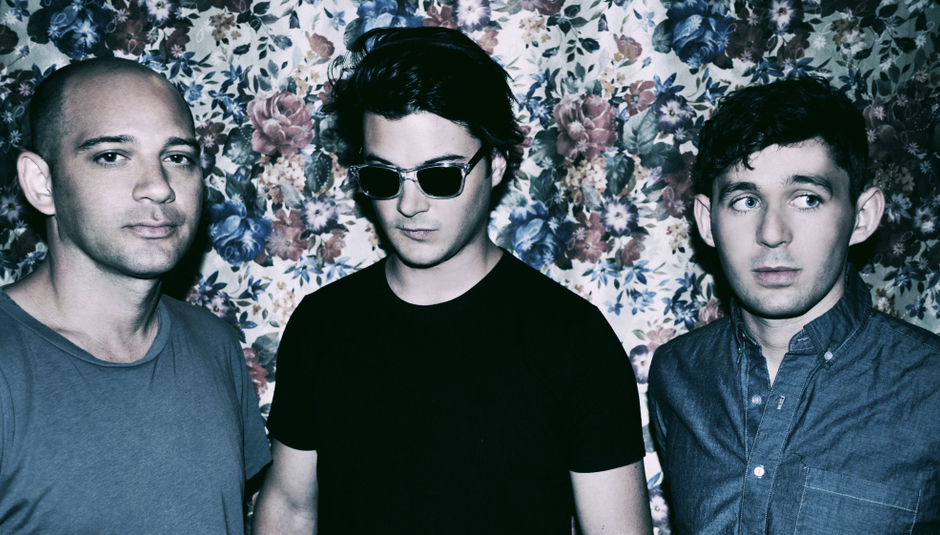 It may seem a bit premature to talk about albums of the year but Burst Apart, the glorious fourth studio album from The Antlers is something else. Gone is the ghostly mist of Hospice, and in place of its place stalkerish hue, there's that sexual throb of soul music, and something almost Spiritualized goin' on but toned right down to the bare essentials. Subtle hints of brass and Grizzly Bear-ish soaring harmonies writhe in slow motion amid tender drums and hazy walls of guitars. Burst Apart is, truly, an exquisite album that rewards you for each minute your spend with it, and as every repeated listen calls you back to its bosom, you begin to dream about high-class filth and heart ache and your teeth falling out...

To celebrate the album's release today in the UK, DiS fired some questions at Peter Silberman, the band's singer and chief songsmith. Here are the thoughtful responses, confirming a few of my fanboy theories, which were digitally transmitted back...

Sean, DiS: Let's start at the end of the record: the dog, is it yours or is it completely symbolic of those shared things that suffer when a relationship ends? Or is it more about an underlying fear of your canine friend having to be put down?

Peter Silberman: My dog (or rather, my childhood dog) is still alive and well and amazing, so it's not literally a song about him. I think of that song as being about putting a matter to rest, or putting fears and anxieties to rest. It's a song about letting go and trusting someone, abandoning the fear of being hurt. For me, that's the residue of the relationship detailed on Hospice, and the song is an encouragement to move on. Really, I think that realisation is what the whole record leads up to.

This record feels conceptually and texturally quite different to Hospice. Was there anything in particular - like an instrument, a song or a moment - that changed your approach this time around? It's almost as if there's a lot more colour to Burst Apart than the desaturated crypt-ish feel of the previous album.

I think we went into Burst Apart with different colors in mind than the bleak prettiness of Hospice. For me, it was about exploring new guitar sounds and experimenting with new ways to turn a guitar into something completely un-guitar-like, while also having very natural guitar sounds to accompany the more processed elements.

What're your favourite Prince tracks? (Only because I finally figured that it's either his post-soul shadow that seems to be hanging over Burst Apart or David Byrne's)

While we were heading into the vocal and final guitar phases of recording, I was listening to Dirty Mind every morning before heading to the studio. It's surprisingly good morning music!

Speaking of David Byrne, he has this great TED talk about how architecture affects music. Do you think your growth as a band from a solo bedroom project to touring the globe, and playing larger spaces, has impacted on the sort of music you're making now?

Absolutely. The sound of Hospice was largely a product of the environment it was recorded in. It's a big sounding record, but it's also claustrophobic and frustratingly repressed. Seeing so much of the world, playing music in some massive spaces, and moving into a big open recording room let everything on Burst Apart breathe.

You self-produce your records, I'm curious if there's an element of control that's important to you or if it's more a case of the way you work. Or is it just simple economics?

Control is very important for us. We hate the feeling of anybody outside the band coming in and giving us musical direction. A huge part of the sound of Burst Apart was our exploration of different ideas, experimenting until succeeding in creating something that we enjoyed listening to.

Lyrically, the album has a semi-conscious dreaminess of teeth falling out, etc and an almost hypnagogic feel to it, which is the way a lot of post-dubstep is described at the moment. Do you think there's something about the hyper-connected nature of the modern world and the current financial/political climate that is inspiring this slant on music?

I think all of the hyper-connectedness has lead people to constantly seek out innovation and change, both in technology and in music - essentially it seems like things that sound "different" are what get people excited. That doesn't bode well for more traditional-sounding bands, but I think it opens the door for more textural and experimental groups to find new means of creating relatable music that evolves over time.

Burst Apart sort of has a transatlantic feel to it, are your listening habits quite balanced or did you have a big Brit faze at some point?

I've just ended up listening to so, so much different music in the years since Hospice. There was a lot of old 60s dub and 90s electronica, things like Portishead and Laika, but, like so many people, Radiohead was my bridge into more out-there music when I was teenager, and I'm sure that's colored Burst Apart, whether that was intentional or not.

Is there much of a 'Brooklyn scene' now that most of the bands bubbling out of there seem to be permanently on tour? Has it changed much since you've lived there?

Brooklyn's changed tremendously since I moved there only 5 years ago. When I moved there, it really did seem to have a "scene", but since then, those bands have been seemingly perpetually on tour, and the bands that come into town are often from elsewhere. There are still a ton of Brooklyn bands, but I don't think the place has a "sound" right now. Everyone's trying to stand out, whereas a few years ago, a lot of bands sounded similar.

You previewed your album with NPR, for any Brits who've never checked out the station, which shows do you recommend they investigate to get into the station?

All Songs Considered would absolutely be my vote. They cover a pretty wide variety, always with genuine enthusiasm.

Joke question from Twitter: Would you consider doing a nu-metal version of the album called 'Durst Apart'?

In Photos: DiS presents PS I Love You...