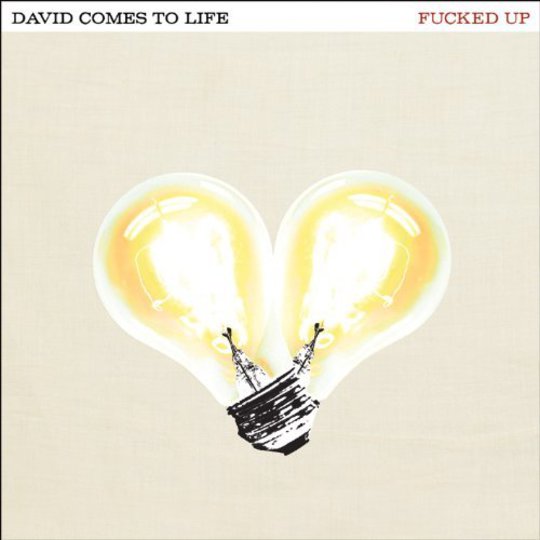 Fucked Up, being as they are enthusiastic yarn-spinners and canny users of Web 2.0, have cooked up a website to accompany David Comes To Life, their third studio album. While this is hardly unusual nowadays, it’s a shade more useful than the average fur-coat-no-knickers nightmare of Flash and bad viral marketing that describes most sites built to promote a solitary record. For one thing, there’s a ten-minute micro-documentary in which the Canadian sextet explain their position in today’s rock landscape: guitarist Mike Haliechuk, possibly attempting a pre-emptive strike, says that they’re no longer a punk or hardcore band, in spite of this being their unarguable heritage.

They go on to explain the storyline behind David Comes To Life, which is presented as a rock opera on a par with Tommy, Zen Arcade or American Idiot, only longer than any of those. I say 'explain', although nearly every member eventually admits to being sketchy about the precise details of the narrative. As it goes, though, having a handle on the underlying concept is merely a bonus to enjoyment of this – largely most enjoyable – album, rather than a necessity. It’s set in the late Seventies and in Byrdsdale Spa, a fictional English commuter town (Fucked Up seem to have a low-level fascination with places like this, probably as a result of their voracious record collecting), and charts the plight of David Eliade, who works in a lightbulb factory. Initially entering into a relationship with a left-wing pamphlet dispenser, Veronica, she is later killed in a terrorist attack, the circumstances of which are couched in confusion.

That said, you’ll have to do a sight more to figure this out than just reading the lyrics, which make the bare minimum of reference to names, places or events; instead there’s a glut of crypto-religious imagery and rapid volleys of metaphor, neither of these things exactly uncommon in the verbiage of main FU lyricist Damian Abraham. On one level, this ensures that David… builds a culture around itself above and beyond what’s on the record (they’ve talked, with apparent sincerity, about turning it into a musical); on the other, it means that you can enjoy the album without paying much heed to the plotline. Musically speaking, it’s a perfectly logical progression from Fucked Up’s second album, 2008’s The Chemistry Of Common Life, which itself strode recognisably onwards from their 2006 studio debut Hidden World. They’re bringing little to the table that should challenge anyone who crushed on either of those, but there’s no shame in that – considering that we’re talking about, collectively, two-and-a-bit hours of sonically dense bangers which, at times, represents a high water mark for the last decade of punk.

In part, they appear determined to live up to their 'not a punk band' confession-cum-brag – not just via grand concepts and Catholic-wedding running times, but also by exploiting the studio to its full potential. Their current three-guitar lineup, which seemed an almost self-parodic exercise in indulgence when first floated, now works better than ever, placing them at an improbable midpoint between Band Of Susans and Oasis – f’real, a number of songs here (‘Running On Nothing’, the terrific ‘Ship Of Fools’) would slot pretty logically into Definitely Maybe, save for the presence of Damian and his dude-from-Poison Idea bellow. Its timbre, basically unchanged since Fucked Up were belting out singles like ‘Police’ and ‘No Pasaran’, is notable for its inflexibility. No matter what abstraction of classic rock the band dream up, irrespective of the tweepop-referencing female vocals on ‘Queen Of Hearts’, ‘The Other Shoe’ or the penultimate ‘One More Night’, Damian roars into the wind. This might be a dealbreaker for some listeners, not gonna lie, but it helps to make Fucked Up sound little to nothing like anyone else in the game.

When this formula is laced with steroids and Dexedrine and turned, in an Ouroboros cycle, into legitimate hardcore punk, is perhaps when David… is at its zenith. ‘Serve Me Right’ and ‘Life In Paper’, both in the album’s middle third, find FU pouring all the things they do best into a single sturdy casing. The repeated cry in the latter song of “Who can I trust?” could have been one of conspiratorial leftist paranoia, if Fucked Up had stayed loyal to their Toronto hardcore birthright – or one of sweaty cokefear, if they’d developed the kind of habits normally linked with rock operas and triple-axe multitrack mania. As it happens, it’s the voice of David Eliade, confused as he discovers that Octavio St Laurent – the ‘narrator’ of his saga – has a more direct involvement in its development.

All told, I can’t really blame the band for not being able to condense the plot into a snappy soundbite. Equally, you can understand why they’ve suggested that David Comes To Life might be the end of the line for them, as far as albums are concerned: how do they build on this? The kneejerk suggestion (from where I’m sitting, at least) would be a 15-track, 20-minute record released only on vinyl, or something like that, but you suspect that’d be deemed a crude and self-defeating way of staying challenging. Rather, they might have finally reached the point where to challenge need no longer be the main imperative. It shouldn’t have to be, really. They boiled up killer jams when there was no great expectation they do so, then they went on to heap pressure on themselves and… boiled up killer jams. Famous last words and all, but who’s to say they won’t still be on the boil in two decades’ time?