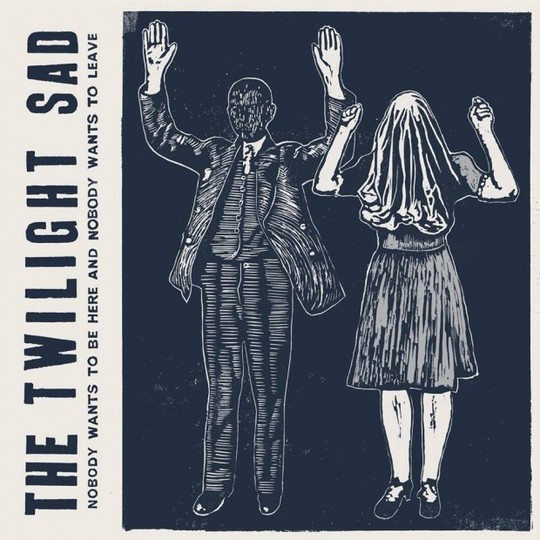 Much as I love this new album from The Twilight Sad, there are times that putting on Nobody Wants to be Here & Nobody Wants to Leave would be inappropriate: while having a romantic meal with a loved one, perhaps; while doing the housework; during sex or when standing on a corner in Winslow, Arizona. Play the record as background music, when taking it easy and you’re going to be left with a difficult, impenetrable slog.

No one could ever accuse the band of shying away from accessibility – their debut, Fourteen Autumns and Fifteen Winters, is one of the finest indie pop records of the millennium – but few concessions are made to the listener here. This is no bad thing: in this day and age innumerable people count themselves as music-lovers and yet will grab as much as they can for as little money as possible. Why shouldn't the illegal downloader be made to work for such an outstanding album?

It feels as though a lot of deliberate obfuscation has gone on here. Each of the ten tracks is laden with feedback and post-rock drones; the production is noisy and crackled and singer James Graham’s thick Scottish accent is as uncompromised as The Proclaimers (albeit thankfully without the nasal inflections). The result is what separates indie music from the contemporary mainstream: an actual album, a 40-minute body of work with a sense of cohesiveness that isn’t designed to be broken down into Spotify playlists or end-of-year 'best of 2014' mixtapes.

Like those great post-punk era records, it’s an album that mixes earnestness with cinematic emoting and pop hooks. ‘Last January’ is spacious and urgent, ‘I Could Give You All That You Don’t Want’ combines a jumping bass with ethereal, chiming guitars and the title track echoes My Bloody Valentine’s ‘Sometimes’. It sounds as though it could fit on the Lost in Translation soundtrack and, as someone who fell utterly in love with Sofia Coppola’s masterpiece and found it to be a gateway to alternative music, I can give little praise higher than that.

Irregular readers who tend to gravitate towards Q certain other magazines may be looking for the section where we list Key Tracks. “Where should I skip to in order to really understand this album’s magnificence?” you ask. You’re an attention span-deficient numbskull. These aren’t songs so much as digitally separated parts of a perfectly complete piece of art. Nothing leaps out as a single, it would be impossible to capture the beauty of Nobody... in just five-and-a-half minutes (the run-time of the longest track).

Yet this isn’t to say that the songs aren’t magnificent in their own right. ‘Drown So I Can Watch’ carries all the desperate, heartbreaking beauty that its title and the “carry me away from here” refrain suggests. ‘Pills I Swallow’ sounds like Simple Minds covering The National and the result being the best of both worlds. The closer, “Sometimes I Wish I Could Fall Asleep” combines a sparse piano with delicate samples of an innocent, childish rabble and wrings every drop of sadness from each of its few notes. But here’s the thing: you can probably tell from the song titles mentioned alone that there’s a theme to the album, one of tired melancholy, but it’s not until you assemble – no, grow, because this is nothing if not organic – the whole thing, that the jaw-dropping brilliance of the album reveals itself.

The Twilight Sad gave birth to one of the greatest British debut albums in living memory. That was in 2007 and just seven years later they’ve given us an indication that they could attain greatness on a par with MBV or The Jesus and Mary Chain. Hell, carry on like this and we’ll be comparing them with The Cure.

This is an album that echoes Test cricket at its best, or the very best American network dramas. It calls to mind Paul Giamatti’s perfect monologue in Sideways, which is worth quoting in full here as a neat summary:

It's a hard grape to grow, as you know. Right? It's uh, it's thin-skinned, temperamental, ripens early. It's, you know, it's not a survivor like Cabernet, which can just grow anywhere and uh, thrive even when it's neglected. No, Pinot needs constant care and attention. You know? And in fact it can only grow in these really specific, little, tucked away corners of the world. And, and only the most patient and nurturing of growers can do it, really. Only somebody who really takes the time to understand Pinot's potential can then coax it into its fullest expression. Then, I mean, oh its flavours, they're just the most haunting and brilliant and thrilling and subtle and... ancient on the planet.