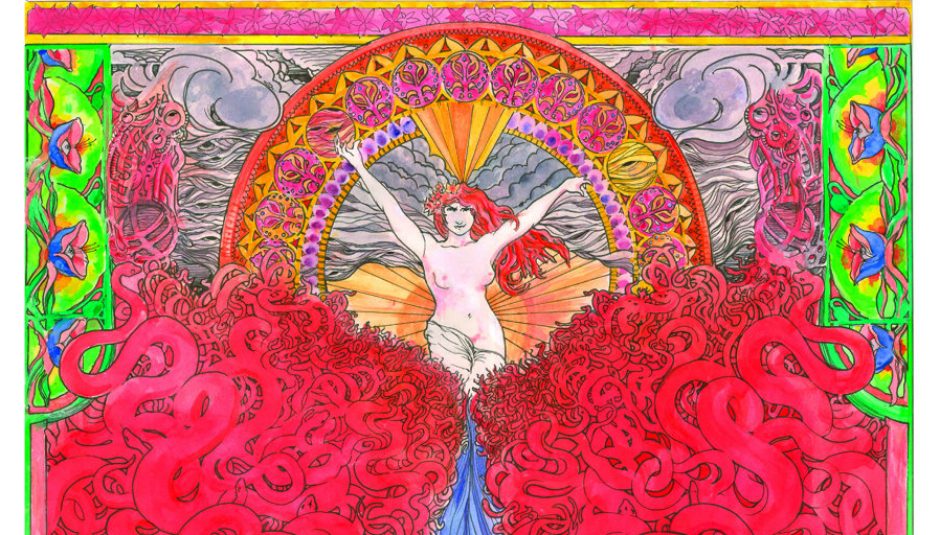 There was a point, at the turn of the decade, where Fucked Up threatened to crash through the self-created glass ceiling they had set for themselves by adopting that name. At the time of their monumentally successful 2011 album David Comes To Life, they had toured with Arcade Fire and Foo Fighters, had won Canada's Polaris Prize (their Mercury) with 2008's The Chemistry Of Common Life and were getting TV performances (as the censor-friendly F'd Up) and performing with orchestras

For a few months at least, everyone was a Fucked Up fan. Years of constant touring and hard work finally paid off with their ambitious ode to one of their all-time heroes The Who, and their rock-opera Tommy. They fulfilled the promise they had been slowly building towards throughout their career in David Comes To Life, pushing the boundaries of what a small hardcore-punk band from Toronto could achieve with a profanity-laden name that ensured they had to do it all themselves without the help of mainstream media and radio (who would eventually acknowledge them anyway).

However, the "David" story didn't originate there. "David", their Tommy, saw Fucked Up create a story based on mythology they had been creating through their interviews and artwork for years, creating a reputation and notoriety consistent with their name and background. For in the early days of Fucked Up, they were a small voice in a big pond of the hardcore-punk scene in Canada, a country not traditionally known for its punk leanings in an era of Arcade Fire and previously Godspeed You! Black Emperor! Formed in 2001, Fucked Up spent the first 5 years of their existence playing tiny venues across North America and releasing a countless amount of 7" and 45s singles across any label who cared/dared to. The band would later collect these into their first LP, the compilation album, 2004’s Epics In Minutes, on Canadian label Deranged Records, and while there are plenty of excellent stuff to be found in those early days, such as the anthemic 'Police', they were still fairly bound to their genre and scene.

The most notable aspects of Epics In Minutes, other than its suggestive title of things to come, were its inclusion of interview segments where the band first mentioned the concept of them all working a day job in a light bulb factory – a lie they would later use as the setting of the "David" story – and the song(s) 'Baiting The Public'. Split into two parts in its original incarnation, the (whole) song would later become the lead single off their first album proper, which saw the band trying to push beyond the simple confines of what a straight-up 2-minute song punk band is supposed to be. Its lyrics are confrontational and literally "baiting", but the musicianship on display was the first real demonstration that this band had the potential to become more than just your average meat-and-two-veg punk-rock band, showcasing the band's musical ability, live style and, most importantly, willingness to play with the accepted idea of the punk-rock song structure.

And so, when the time came to write and record that first album proper, 2006's Hidden World, they fulfilled the early promise shown, and then some. Recorded with a local friend Jon Drew, who would later become best known for his work with Tokyo Police Club, the album was a risk right from the beginning. It was Drew's first major assignment as a producer, while the band were at risk of completely alienating their home-grown punk-rock fanbase, who can be a peculiarly musically-conservative bunch at times and were used to a certain style, all the while being bankrolled by Jade Tree records, a label more famous for its emo and indie output such as The Promise Ring and Jets To Brazil. And yet, part of the charm of listening to Hidden World is hearing the risks the then relatively young band take. For instance, Arcade Fire violinist Owen Pallett (a.k.a Final Fantasy) wrote and performed parts of the album on 'Carried Out To Sea' and 'Blaze Of Glory', while the album's title track ends on a whistling melody. These were things punk bands just didn't do, even in 2006, until Fucked Up came along, stuck two fingers up to form, and just threw everything they could at it.

Hidden World hit its 10th birthday this week, and if you'll indulge me in a quick personal aside, I'm still feeling its effect to this day. It was released the same week I turned 18 and at that point in my life, I had been seriously interested in DIY punk music from my humble beginnings in Norwich, which at the time had a surprisingly impressive music scene that allowed my band, Maths, to emerge. By late 2006, I and many of my peers had been fully submerged in DIY punk subculture, but we were starting to grow tired of its predictability. So imagine what hearing Fucked Up's Hidden World for the first time was like for me. Here was a band that was both unashamedly punk and willingly experimental who had a confrontational name and used their now-familiar logo as a cult insignia for other alienated punks to recognise each other.

Here was a band who got it, with an incredible debut record to show they were a serious threat to the music world. I will never forget my first time, on a long drive between shows with my band, as it blew my mind as well as being highly appropriate for road tripping (it's 74 minutes long!). From the opening, crashing chords of 'Crusades' (echoing the opening of Tommy) the band announced their introduction to a bigger stage; a straight up punk band simply wouldn't do that. There aren't many openers I can name that sound so triumphant and self-deprecating at the same time - "Not proud of it / Not proud of it / I've wasted a lifetime / Not proud of it!" - and it’s no wonder it still plays a big part in the band's live show to this day. And it doesn't stop there; over the course of its 13 tracks, Hidden World invites and then envelopes you into this mysterious "world" they have created. They wrote songs that were epic, catchy, energetic, and mysterious all at the same time. Frontman Damian Abraham screams biblical references and philosophical musings here long before David Comes To Life which takes it's title from Hidden World's second track. One can see even today how this was the moment the band fully embraced their experimental and big-theme leanings into what would become their biggest success 5 years later.

So while Fucked Up were, quite rightly, credited with being the band who revolutionised punk in this century over their next two records – in a completely more authentic way than say, Green Day – it’s fascinating that many missed that they’d already done it 5 years earlier. While The Chemistry Of Common Life was good at catching people's attention and David Comes To Life delivered the epic rock-opera double album their ambition deserved, neither, for me, quite catch the energy of the more succinct and consistent Hidden World. It is perhaps because at 74 minutes and maintaining a clearer hardcore-punk leaning, Hidden World is an intimidating prospect, which has left it largely forgotten in the decade since its release. With the band celebrating its 10th anniversary this month, however, by playing the record in full on their next tour, there has never been a better time to go and see what made Fucked Up the exceptional band they were and still are a decade on.

For more information about the band and their upcoming tour dates, visit their official website.