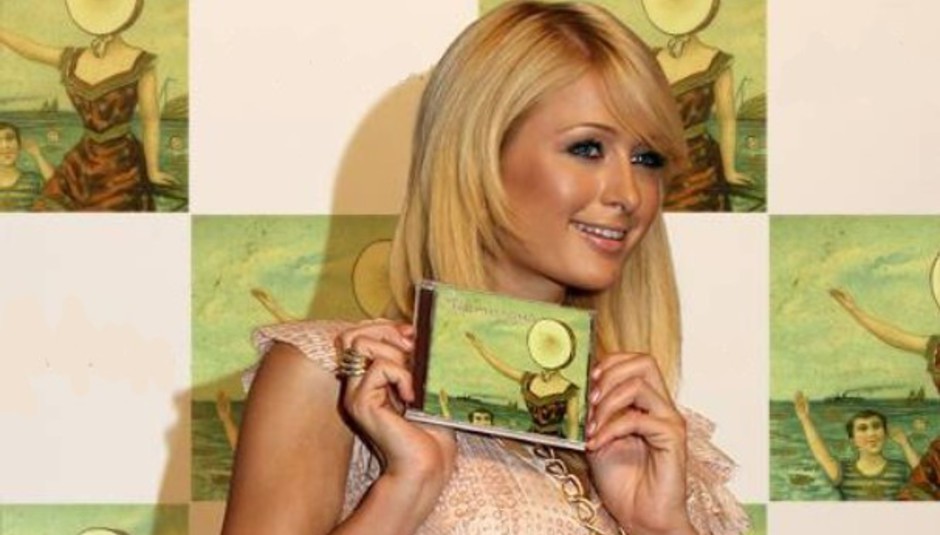 April was another big month for music fans (you could say it was raining music, but let's steer clear of terrible water-based puns, we've only just begun...). Whilst Daft Punk sucked up the social media oxygen, Boards of Canada dropped a series of clues for devotees to hack their album loose from their fist, and send it out into the world (to pre-order...). Then there was the small matter of Neutral Milk Hotel reforming (just imagine how excited Paris Hilton must be!), and the biggest girl band of them all TLC confirmed they're returning for some special shows, 10 years after Lisa 'Lefteye' Lopes passed away (she'll be there at the reunion shows as a hologram). There was Record Store Day. Amanda Palmer did a rubbish poem about a terrorist and a cringe-inducing letter to try to encourage Morrissey to adapt to the times and fan-fund his next album... There was Thatcher, and then there wasn't any more... Oh yeah, and Phoenix, Paramore, Yeah Yeah Yeahs, The Knife, James Blake, and oh-so many more 'dropped' new albums into the ether/cloud/digital abyss. Reducing this month into digestible morsels isn't easy (is it ever?), but here goes....

April As A Playlist

These playlists are our attempt each month to stick some music to our coverage and the discussion on our boards. To find out what else our community loved this month (as a lot of it wasn't available on streaming services) have a read of the April 2013 highlights thread.

You will find loads more playlists over on our editor's profile here.

You can get a free trial and follow DiS' editor on RDIO here.

Over the past few week's, there's been a changing of the guard with our weekly singles column. After 4 years and a lot of larks, Wendy Roby stepped down as the one-wot-does-the-singles to focus on proper grown up writerings. Rob Leedham has bravely in stepped and run amok (in the best possible way) with the column. Have a read of his first few here, and take a listen to April's singles all in one playlist right here:

DiS Columnists: Tracks of the Month

Here's a new thing for our monthly digest, but it's pretty simple. We have a lot of regular columns on the site, focussing on various different genres and areas of the country. There's Champion Sound which focuses on rap and hip-hop, Armchair Dancefloor that delves to the depths of electronic music and has a dubstep womp in its trunk, Dom Gourlay does shoegazy-droney-musics, there is April's all-new 'noise-pop' column, and the there's the as-mentioned-just-above singles column. You'll find the most recent editions of these specialist columns righ' here. If you're interested in becoming a DiS columnist, send over a sample to our features editor cate AT drownedinsound dotcom.

To give you a taste, and to try to turn you on to some great stuff, here are our columnists' picks of the month that was:

Shopping - London's very own DIY supergroup starring Billy Easter (Wetdog), Rachel Aggs (Trash Kit etc) and Andrew Milk (U2, Nickleback) - kicked their kinetic three-headed being into gear late November and we've been hooked ever since. This is their debut 7” and it hits the shelves June 10th on MÏLK Records. A dynamic blast of edifying post-punk funk, with propulsive bass lines, primitive cardboard-box drumming, call-and-response bellows and hard-shelled vocal interplay, Shopping bring to mind the likes of Maximum Joy, Liquid Liquid, A Certain Ratio, ESG and Erase Errata. B-side 'You Are A Sort (Don't Call Me)' is a full-on disco dancer with rhythms so powerful they reel you in, grab you by the scruff of your neck and then throw you to the lions. The band go on tour this spring, with a handful of UK shows, and an album is due in the winter, also on MÏLK Records. Put it in your basket. Don't shop around. April Clare Welsh, noise-pop columnist

Not strictly shoegaze, psych rock, dream-pop, ambient or any other genre specific tagline one would care to mention. Instead, Manchester's Kult Country occupy the middle ground vacated by 'Storm In Heaven' Verve and briefly filled recently by fellow North Westerners Wu Lyf. As its title suggests, 'Slowburn' does just that in a hazily, hypnotic manner befitting a band whose manifesto simply reads "All Is As All Is In Our Time". Its b-side (or double a-side) 'Among The Dead Forever' is a harsher listening experience akin to Loop's 'From Centre To Wave' that makes us yearn for a time where guitars were used as weapons to destroy eardrums and any matter concealed within. Brutal yet sophisticated, and incredibly sexy. Welcome back on the map, Manchester. Dom Gourlay, shoegaze and drone columnist

Jonwayne is showing off on ‘Cool Runnings’. While his ominous, metronomic piano loop has a certain cockiness in itself, it’s only a backdrop for some of his most verbose and eccentric rap brags yet. The song has more than an echo of Tyler, The Creator’s ‘Bastard’, amplified by Zeroh’s introduction, whose similarly gravelly voice reaches even freakier territory than his partner. These guys rap themselves in circles, but it’s a joy to listen to as the simplicity of the beat allows their words to spiral gleefully off the page. Jonwayne continues to prove himself as that rarest of things; a rapper/producer whose talents are equally weighted. Kyle Ellison, hip-hop columnist

Do you remember when clubs were good purely because they played loud music? When legally paying for alcohol was an endlessly hilarious novelty? When having no plans for your future was the only plan for your future? '22' reminds me of those days. It's another Max Martin-produced track from Taylor Swift's Red and, as such, it fits neatly into the ‘We Are Never...’ mould of pop-rock perfection. Instead of having a glorious post-breakup strop, this time Swifto is totally over her fella and plans to get smashed in the nearest nightclub just to prove it. Cue an introductory pledge to “dress up like hipsters and make fun of our exes”. Listen carefully enough to the gleeful stomp of ‘22’ and you'll begin to taste cheap mixer on your tongue; as well as the impending pangs of an almighty hangover to follow. Rob Leedham, pop columnist

This latest single from Bristol-based producer Kowton - released on Scottish label All Caps - is a rough-edged techno tribute to influential grime collective Ruff Sqwad. It pairs fuzzy, squarewave synth sounds inspired by the Sqwad's "Raw 2 The Core" with Kowton's own penchant for thick, saturated kick drums and gritty percussion, to create a tune that's intricate, propulsive and utterly filthy. It's yet more proof that Kowton's one of the most talented and genuinely exciting electronic artists in the UK right now. Si Truss, electronic columnist

DiS Album of the Month "It’s one thing to say that Colin Stetson is the saxophonist on Arcade Fire’s The Suburbs and Bon Iver’s second album – so what? You might say... There’s always an exception to the rule that sax ruins a song… In fact, Stetson’s the exception who’s made solo albums that appear high up in DiS, Wire, and Pitchfork end of year lists. Unlike Owen Pallett – another solo artist who broke out of the 'supporting musician' ghetto with his albums as Final Fantasy – Stetson’s earned his acclaim without much concession to normal song structures or more than a few tracks with conventional vocals... an avant-garde response to file alongside The Disintegration Loops by William Basinski.... essential listening and another triumph."

...And we leave you with links to our most read things from the 2,511,088 pageviews DiS has had in the past month, which took DiS well over 10million pageviews for the year to date! (if you're interested, there are more DiS stats shared here).

Until next month you can follow DiS on the following social networks.

...And if you really want to, you can also follow me (DiS' founder/editor):