Jello Biafra and The Guantanamo School Of Medicine

White People and the Damage Done 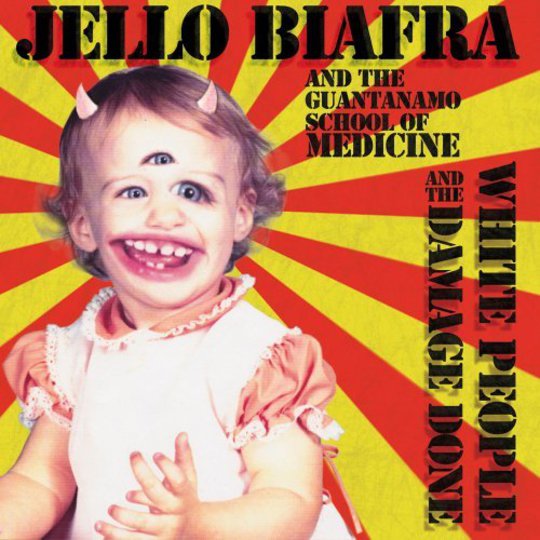 When Jello Biafra first entered the ring thirtysomething years ago as frontman of the Dead Kennedys, there were pretty much no musicians who expressed their worldview in a comparable manner. Now it is 2013, as Jello himself may well be rewriting one of his best known songs to acknowledge, and while the punk rock soapboxer supreme is still keeping his release schedule fairly regular well into his fifties, the current generation doesn’t appear to have generated a lot of Jello-alikes.

At least, not musical ones. Jello and the DKs’ legacy is more likely found in the wide’n’wacky world of social activism which presents itself using that dread tool, humour. It seems a fair bet that brash anti-Vietnam campus protests captured the imagination of a young Eric Boucher, before he took on his punk pseudonym. So if myriad leftist marches and Occupy sit-ins are (consciously or otherwise) channelling the enduring sloganeering of ‘California Uber Alles’, ‘Kill The Poor’ etc, then this feels like a nice passing of the torch, at least.

On ‘Shock-U-Py!’ – the final track on White People And The Damage Done, his second album with The Guantanamo School Of Medicine – the singer’s endorsement of the politically galvanised younger generation is made explicit. Also released as a single late last year (the B-side of which, I’m grimly compelled to note, was called ‘Barockstar Obummer’), the seven-minute-song sets out how consistent prankish resistance is the only way to chip away at corruption, greed and plutocracy. It was apparently written in a manner easily adaptable for acoustic singalongs, and let’s just say it sounds like it.

Musically, Jello’s backing group seem to be moving further towards a kind of punk cabaret. This was always a looming presence in the Dead Kennedys, thanks mainly to East Bay Ray’s jittering spy-movie guitar – which Ralph Spight and Kimo Ball have clearly studied to some extent – but things like album opener ‘The Brown Lipstick Parade’ display boisterousness bordering on the inane. This somewhat fogs the impact of the song’s theme, the redundancy of the American two-party system when both are in the pocket of big business, although the fact he talks about “illuminazis” in the first line and calls politicians “Corruptasaurus Wrecks” shortly after doesn’t exactly help.

In fact, there are a fair few proper lyrical wincers on White People..., certainly more than its broadly on-point, Obama-bubble-popping predecessor, The Audacity Of Hype. A “Bernie Made-Off” appears on ‘John Dillinger’, an otherwise belting hardcore-paced song about how comparatively small-scale crime is given disproportionate coverage to distract from far greater economic failures (pro tip for Jello’s next spoken word show over here: this subject is easily adaptable for UK audiences). The vintage surf-rock-referencing ‘Hollywood Goof Disease’ is about celebrities – dontcha just hate them!?! – mentioning the Kardashians and Twitter as avatars for all that is bad before settling for the refrain, “Shut up and shop!” It’s not that this is an objectionable line of thought, but like the laboured wordplay it just feels like it should be written under an online news story by someone called WakeUpSheeple101. (Again, it’s tempting to suggest that this constitutes the world catching up with Jello.)

If this all reads like I’m either describing an actively bad album, or gratuitously taking potshots, neither is the case. Although this is overall a less ramalama-punky record than The Audacity..., and certainly than the two full-length teamups with the Melvins before that, there’s plenty here to prompt a nostalgic sniffle in Dead Kennedys fans. ‘Werewolves of Wall Street’ employs a time-honoured Biafra lyrical tack, singing in the persona of his bête noire (I was reminded of the DKs’ ‘Goons of Hazard’, if we’re being specific); ‘Road Rage’ is fast enough to slot onto the ‘In God We Trust, Inc.’ EP, and sidelines direct political lambasting in favour of a study of the workaday family man who’s on the verge of snapping at the wheel.

It’s often asserted by professional curmudgeons that a pop song – let alone a punk one – never changed the world. Even if this is true, Jello Biafra and the Dead Kennedys’ music did more than nearly anyone else’s in the Eighties to cause a shift in ideals and ideologies. Nothwithstanding the fact they’d been broken up for nearly a decade before I discovered them, Fresh Fruit for Rotting Vegetables was a gamechanger for me, too. Maybe the moral is that the thoughts of Chairman Jello are best absorbed when you’re 17. The punk rock world, as observed by this now 32-year-old, is not currently inspiring for anyone holding out for a new DKs, in that there are just about no bands who tick all the boxes of (a) political literacy, (b) being known beyond a tiny audience and (c) being any good. Which makes it a shame that, despite Jello Biafra’s best intentions, White People And The Damage Done seems to settle for righteous belligerence while falling some way short of being a worth soundtrack for the anti-globalisation movement. Still, he definitely hasn’t fallen off as hard as Winston Smith, who has done some amazing album art for numerous Jello-related projects, and is also responsible for that hideous cover above this review.