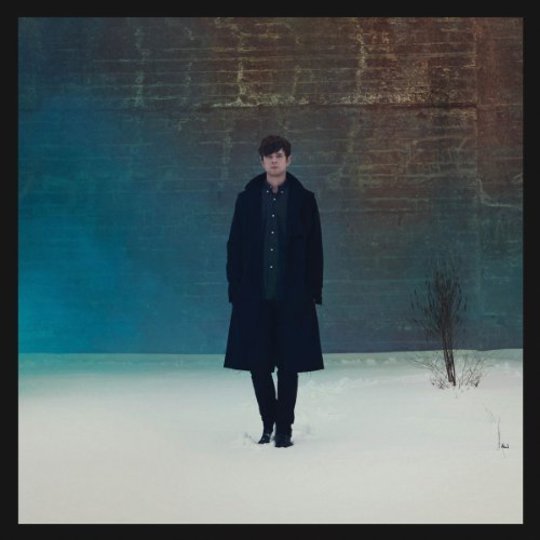 Never judge a thing by its cover they say, but man alive sometimes that’s tough. Here’s one of those times, with every attempt to approach Overgrown objectively marred by convulsive, fevered flashbacks to its original artwork - the subject of derision and mirth and horror ever since its February reveal. Once seen it’s impossible to repress, a sexless marriage between a French Connection menswear campaign and the crayoned idealism of the Jehovah’s Witnesses’ Watchtower magazine: for days I was hoping it was an Onion parody, or some terrible collective hallucination.

Mercifully the stream bestowed upon us by the label replaces the artwork with a simple black square, a considerable improvement and one that lets me actually listen to the thing without wanting to carry out an atrocity. But to be fair coming up with fitting imagery for this album was never going to be easy, and assigning it a neat genre label harder still: even more than James Blake’s debut, Overgrown seems to exist outside of convention, a long way from fashion and any narrow expectations.

Certainly Blake has roamed pretty far from the dubstep that characterised his early tracks, away from the club beats and the bass drops and pretty much anything at all that might provoke communal movement: this isn’t an album for consumption so much as contemplation, lonely and solipsistic and darkly amniotic. “I don't want to be a star but a stone on the shore, a lone doorframe in a war” he sings on the opening title track, a confessional of understated beats and decaying synths, of fragile builds and broken vocals.

Even at its most melodic, Overgrown is disarmingly heavy, first single 'Retrograde' evolving from its arpeggios into an emotive swell of sound that drowns the light before it: "We’re alone now" Blake repeats, over and over, his voice echoing and multiplying and finally fading away. Elsewhere the Brian Eno collaboration 'Digital Lion' presents an eerie post-apocalypse of drawn-out sirens and garbled voices and clattered mechanics, at once driving yet intensely melancholic.

There’s a claustrophobia here that’s only broken twice across the 40-minute runtime. The first is during RZA’s contribution to 'Take A Fall For Me', his incongruously anglophile references to "a million quid" and "fish and chips with vinegar" a touch jarring given the airlessness of the tracks around it, although the hip-hop digression provides a welcome variety. The second comes with 'Voyeur', Overgrown’s only real dancefloor release and a propulsive assembly of invigoured melody and full-body electronica, its impact such that everything that follows seems a little muted by comparison.

But then this is an album that seems more at home in the shadows, pared back and delicate, the shiver of a candle flame more than the pulse of a speaker. Without wanting to evoke that cover art unduly it’s appropriate that this time around Blake is dead centre and presented without effect: far more than with his first album Overgrown is focused upon his songwriting rather than his technology, and it’s much stronger for it. "You know how you’ve grown" he sings on closer 'Our Love Comes Back', and it’s difficult not to echo the sentiment: this is impressive stuff.