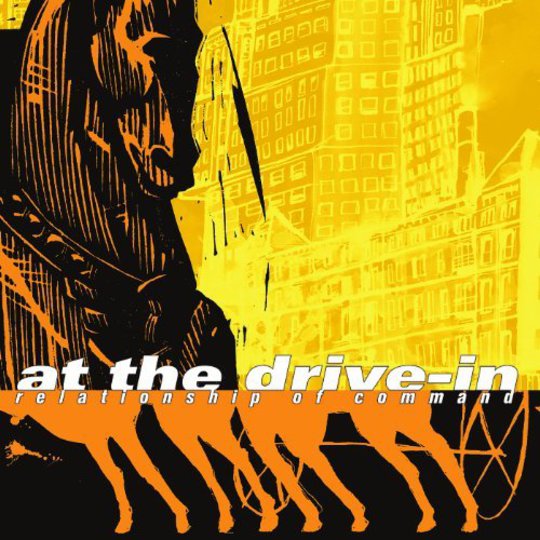 For a lot of people, particularly those in their mid to late twenties, and presumably a large portion of those that read this site, At The Drive-In are more than just a band. Relationship Of Command represents almost a year zero in terms of music taste and believing what was possible.

At the time it seemed like ATDI burst into the conscience of the music press and general public from out of nowhere, a whirling dervish of hair, anger, throwing chairs and themselves around with little abandon and seemingly no precedent. Except that they didn’t come out of nowhere. Rather they came from almost 10 years of solid touring, performing and recording, from a scene built on its own rules, one that helped make At The Drive-In the band that everyone loves, but ultimately lead to their downfall.

Following on from last year’s somewhat divisive reunion tour, Transgressive have decided to reissue the two albums that bookend the band’s career – Acrobatic Tenement, now available on vinyl for the very first time, and the somewhat ground breaking Relationship Of Command, which was previously very rare on vinyl. In all other respects it's just the original records again with no frills attached, but where most commentary on this band focuses on their swansong, now seems a good excuse to compare those two records to each other.

Recorded three years into their existence as a band, for the respectable sum of $600, Acrobatic Tenement is At The Drive-In’s first full length. Having already fined tuned their abilities through three years of constant touring and a handful of 7-inches, Acrobatic Tenement is energetic and engaging as anything they released afterwards. All the hallmarks of what made At The Drive-In great are already in place. It’s pure and clear and lacks the frills of their later efforts. It’s straight to the point. Acrobatic Tenement soars in its simplicity; when Cedric Bixler wails at the top of his lungs “rich kids of the world unite, rich kiDSSSSSSSSS OOOOOO” and proclaims that “we’re proud to be pricks and we’re proud to be assholes” he’s tapping into the same fury that’s present on Relationship Of Command, comparable to the ear shattering “I must have read a thousand faces” part on ‘Arcarsnal’.

It’s Bixler’s vocals that are one of At The Drive-In’s greatest strengths. He spends the majority of the record sounding like a Latin Danzig, alternating between a baritone wail and a guttural scream. His lyrics haven’t yet fully developed into the almost entirely nonsensical Williams Burroughs word vomit they’d become, but he stills gets pretty obtuse at times. “Turnbuckle tourniquet clotting the moonshine/Clotheslined seizures singing happy valentines” – anyone? Despite Omar Rodriguez not yet being on guitar duty, ‘Initiation’ and ‘Embroglio’ features the kind of spidery mess of guitar parts that show up all over Relationship Of Command. Clocking in at just over 30 minutes, Acrobatic Tenement is At The Drive-In at their purest, their most straight ahead. (9)

Recorded four years on, Relationship Of Command features a different line-up to that on Acrobatic Tenement. There’s a whole new rhythm section, and Omar Rodriguez has switched from bass to guitar. Rodriguez’s approach to playing the guitar seems to be playing two wrong notes for every right note. Take for example ‘Rolodex Propaganda’ – the guitars are all over the place, like a buzz saw mixed with salsa, yet somehow it holds together, never quite sounding wrong enough to think it was a mistake. The new rhythm section is a powerhouse, driving the songs forward like a steam engine. The first three songs on Relationship Of Command (‘Arcarsenal’, ‘Pattern Against User’ and ‘One Armed Scissor’) are such a forceful opening salvo, it partly renders the rest of the album redundant. Only a couple of songs really match the quality of these three, and some of the more experimental offerings, whilst not bad by any means, are certainly not the band at their best.