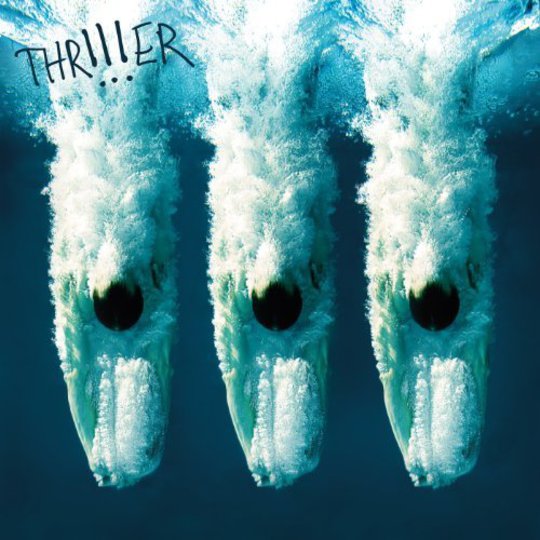 If nothing else, !!! have undoubtedly won the title for the most self-assured title of the year in Thr!!!er. And in many respects, they’ve earned it. If you’ve seen the band live, you can give testament to the confidence which they exude – Nic Offer windmilling a hurricane of sweat and testosterone through his crowds, shimmying at full breadth of his arm span, spending more time off the stage than on. And armed with an arsenal of songs which ooze explicit sex appeal through their lyrics and their grooves in equal measure, there’s little surprise that they can come out with a title like that without blinking or winking.

The more surprising thing is, in fact, that the more assured their lyrics and veneer have become, the less visceral their music has actually been, to the point that the ‘punk’ part of their former ‘dance-punk’ tag might better be replaced with something as removed as ‘lounge jazz’ these days. Myth Takes, from 2007, exploded into your face with the jagged guitar work of frenzied cuts like ‘All My Heroes are Weirdos’, but they’ve since rounded their corners to softer and slinkier grooves. And that’s not because !!! have lost their edge; but because they’ve gained the relaxed, cooler-than-you confidence of someone who doesn’t even have to try to command lustful attention.

This approach has necessitated the incorporation of a wider array of influences from the canon of dance music, drawing on jazz, R&B, soul, house, and more. The results, in this still-formative period of their development, have been predictably mixed. The sample laced sassiness of ‘Slyd’ is a slyly alluring winner, with its female vocal hook of “I don’t’ really like you, but I like you on the inside” arching its eyebrow as much as its back. But with something like ‘Get That Rhythm Right’ – even though it undoubtedly ticks all of the requisite club-stomp boxes – doesn’t quite transcend the fate of being little beyond the sum of its influences. Starting like a more humanised Matthew Dear, later passages sound like they’re one over-zealous hi-hat away from inviting us to get innocuous.

Ultimately, the strongest moments on here are those which are most confident to leap into uncharted waters, as well as those which are equally confident to draw on established strengths. The show stopping chorus of ‘One Girl / One Boy’ – the undoubted highlight of the LP – explodes into an orgy of sing-along ecstasy, its funk guitars and galloping tempo moving with as much urgent electricity as any of their earlier work. And with sweetly simple licks like “when I hear that song… I think about one boy – I think about you” it does so by drawing on a sense of joy which transcends their typical, panting sexual fervour: a sense of love. A love for the beat, a love for the groove, a love for the person you’re dancing with. And, yeah, a love for the fucking you’re hopefully going to get done later.