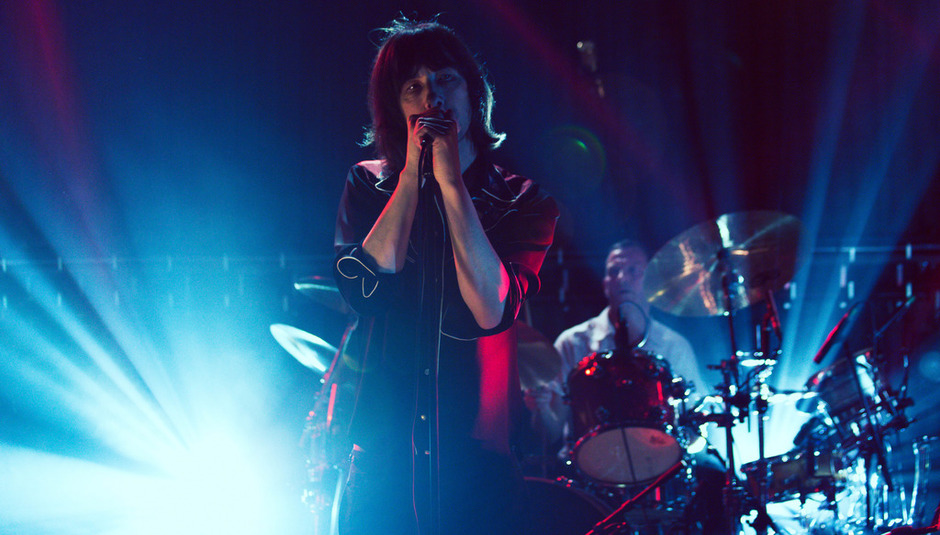 Here’s what you need to know about the Barclaycard Mercury Prize Sessions...

1) Each ‘gig’ plays host to two of the UK’s most hyped/critically acclaimed bands. In this case, AlunaGeorge and Primal Scream. 2) They’re held in front of an audience of competition winners, privileged journos and TV cameramen at The Hospital Club in Covent Garden, London. 3) There is a free bar.

Despite the awkward surroundings, you’d have to try very hard to not have a blast.

From AlunaGeorge’s perspective. the prospect of playing to an intimate room of politely curious attendees can’t be that gratifying. Still, the electro-pop duo trundle onstage with air of a band who are just happy to be paid to play their new songs. Production maestro George Francis is particularly cheery as he chirps along to ‘Attracting Flies’ while bopping hyperactively in front of his array of synths.

Singer Aluna Francis carries a more traditional air of professionalism, marrying some classic arm-dance moves with her icy, intense vocals. This all makes for a remarkably composed set that climaxes in an irresistible one-two combo of Disclosure’s ‘White Noise’ and last year’s buzz-mongering ‘Your Drums, Your Love’.

Whereas AlunaGeorge are lighting up Radio 1’s A-List at the moment, Primal Scream are more of a heritage act. Their latest album More Light comes two years after a triumphant Screamadelica 20th anniversary tour scored Bobby Gillespie and co loads of filthy lucre but placed a giant question mark over their continuing relevance. No wonder the former Creation Records collective returned with ‘2013’, their most abrasive, politicised song since ‘Swastika Eyes’.

No tracks from Screamadelica or XTRMNTR are aired tonight with weaker blues rock cuts like ‘Country Girl’ and ‘Invisible City’ preferred instead. The latter track ends up being played twice after Gillespie complains his crooning sounds like he's ingested “a mouthful of valium”. So not a vintage performance from Primal Scream but, for a bunch of old codgers, they don’t half put their younger contemporaries to shame in terms of charm and energy. New single ‘It’s Alright, It’s Okay’ is sugar-coated in feelgood, baggy vibrations and set closer ‘Rocks’ remains stupidly catchy in every respect.

There’s still six months to go until we find out which act scoops this year’s Mercury Prize. On tonight’s evidence, AlunaGeorge and Primal Scream could well be in the running come November.

A Scream and an Outrage: Win tickets to Barbican weekend of music curated by Nico Muhly