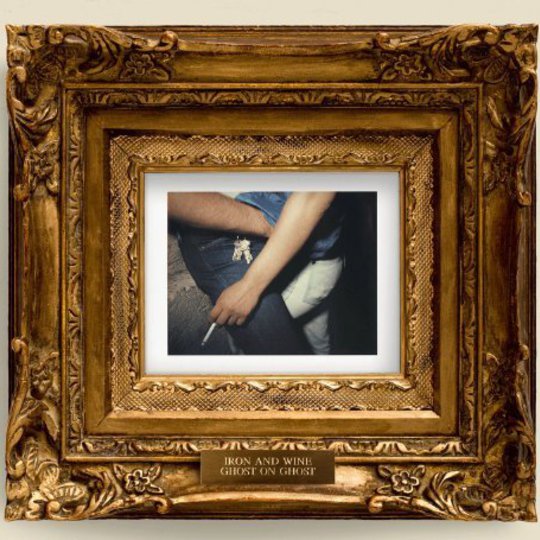 Ghost On Ghost, Sam Beam's fifth long player as Iron & Wine, has an antique gold picture frame on its cover. Inside it are a young couple whose midsections are glimpsed in embrace, one holding a cigarette. This mix of spontaneous intimacy and distancing grandeur is a perfect entry point for Beam's poignant songs which, similarly, attempt to capture a moment and encase it in gilt edged finery.

Beam has been subtly expanding his musical palette since his sparse 2002 debut, The Creek that Drank the Cradle. His bittersweet narratives are now joined by an accomplished band, whose remit includes elements of jazz, funk and soul, in addition to the stark alt.country with which Beam established himself. This would all be a bit diffuse were it not for the for the fact that Beam has somehow managed to retain the intimacy of his previous work, despite the now larger scale.

Opener, 'Caught In The Briars', sets the scene ably with its chorusing horns, twinkling keys and deftly picked guitars, creating a plush base for Beam's rapid and carousing wordplay. There are shades of Dylan in the way he flits between images, stacking them high atop one another effortlessly: "free as a morning bird/ fragile as china/ She's stuck in the weakest heart of South Carolina."? This is one of the many songs on the album which attempt to depict a sense of movement or travel. At times Ghost On Ghost scans as a musical road trip through America's southernmost states, one heavy on place specific references, and personal experience. On 'New Mexico's No Breeze' Beam looks back, evocatively conjuring "bees", "mama's house", "parking lots" and the "passing of pipes", in a winningly suave Sinatra esque croon. Where previously warm with a two-whiskeys-down husk to it, Beam's tenor now glimmers amidst this album's many instrumental jewels.

As a whole, the album is remarkable for its upbeat tone. 'Joy', for example, is as exuberant as its title suggests, with Beam eulogising a lover in what he calls a "silly sort of heartfelt, bumbling tune". Yet it is more serious than that: the glistening production sets intricately layered synths alongside desultory guitar picks, and subtle cymbal flutters. The effect is heady and intoxicating, almost as if the listener is drunk on the love which the song depicts. Similar is 'Sundown Back in the Briars' where xylophone and plangent strings combine to form one of the albums most beautiful melodies, whilst Beam's vocal melodies shimmer above all the prettiness below. Its power turns on Beam's revealing yet cryptic admission that: "all of the naked boys / not even I was true." Following this, the song disappears prematurely into a dreamy swirl of Desire channeling fiddles, as if the weight of feeling is too much for the track to go on.

However, this is a 4AD release, and so it's not without its murky moments. The shady, 'Low Light Buddy of Mine', shows traces of the creepy American gothic world where Beam's songs once used to dwell. On the latter, deliberately facile lyrics - "you love me and I love you" - are undercut by cavernous echo and an unhinged sax line. Ghost On Ghost is too subtle an album to dwell in simple joy too long.

Beam recently confessed to enjoy working with 'loaded subjects', and he has a history of using biblical allusions which is continued here with the recurrent lyrical motifs of "briars", "nakedness" and "sinners". These linguistic tricks help create a complex, multifacted picture alive with meaning and interpretation. Beam litters his songs with darkly wry observations ?"you never tustle with a giant until you can hit him right behind the eyes"- leaving a listener to piece together the shards of accumulative meaning.

Where once Iron & Wine albums sounded almost spontaneous, as if some honey voiced troubadour had stumbled downstairs downstairs and picked up a guitar, they now sound polished to the nth degree. My main quibble is that Beam seems intent on over exerting himself. In an attempt to not be typecast as just a creaky voiced troubadour, Beam has produced such a musically and lyrically 'busy' record that it results in near sensory overload at times. And call me perverse, but I can't help but yearn for a more stripped back sound which would allow Beam's often densely packed words some space to breathe.

Whilst arguably Beam's most consistent album for some years, there are fewer moments of raw beauty here than on past excursions, resulting in a whole that is somehow less than its impressive component parts. So despite its ample charms, Ghost On Ghost isn't quite the classic that it often threatens to be.