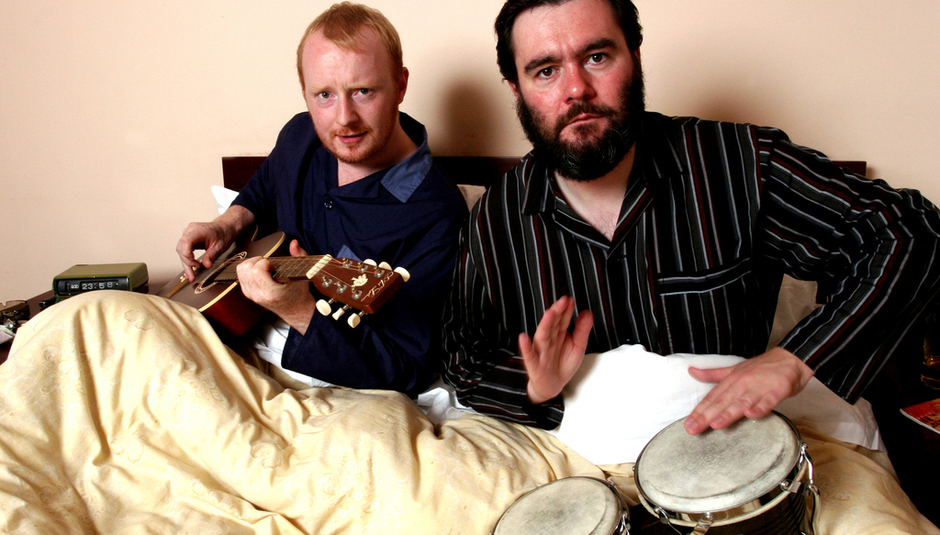 So, for whatever reason (mostly due to our failing back-end), last week's Spotifriday playlist wasn't published. Well, it was, but then it wasn't - and we only just found out. Curses. So this week is now a bit of a double whammy. First we'll go with this week's content which can be found here. And last week's - which really is very good - can also be found here, it has some brillo dubstep stuff on it. Read the blurb for that here.

Thankfully 'Rip It Up And Start Again' wasn't on Spotify, otherwise it would have almost definitely gone on here. Anyway, good news for fans of Orange Juice collectibles though perhaps less good news for Orange Juice fans who are a little bit strapped for funds, as Domino are going to be releasing a 7CD box set of the Scottish group.

The Libertines are making a comeback. They played a couple of warm-up gigs ahead of their blockbusting (we hope) performances at Reading and Leeds this weekend. David Renshaw saw them play at the Kentish Town forum. Read his review here.

V Festival gets a lot of flak. Some of this may be to do with the fact that it's the sort of place where Hollyoaks cast members are in abundance. And ex-Hollyoaks cast members too, like Gary Lucy. That's why it was quite interesting to get Frightened Rabbit's thoughts on it all. It even included a picture of Peter Andre. Click here to read it.

As I've said before and will say again, this duo's name translates as Cheese and Biscuits. Which is cool. The brightly-dressed Norwegians featured in the second part of our review of this year's Øya festival, which can be read here. Cracking track, this.

Hopefully you will have noticed that this week saw the introduction of our 'Favourite 50' records of the last decade. We decided to do it this way rather than just a straightforward list, because the very best records (or favourite ones, indeed) need more than just a hundred words written on them. Things kicked off with My Vitriol's Finelines, which can be read here.

Philip Bloomfield described Tweak Bird's debut album in glowing terms, writing: "This is a blisteringly record that defies convention as much as it delights in melody, and a worthy flagbearer for rock music in this year’s crop of forward thinking releases." Which says enough. This is a single. It is good.

Klaxons return after what seems like a million-year break. It hasn't been that long, but what with all the fuss over their new record, we're glad it's finally here. 'Echoes' is the lead single from it, but you can read the review of the full thing [here](http://drownedinsound.com/releases/15579/reviews/4140683

If you are unaware of Small Black, it's time to acquaint yourself with their work. If you are aware, then the chances are you love them, so the good news comes this week that they've announced their debut record.

Mr Lotus played the ICA this week. We sent Mr Mike Diver along to review it. Am I the only one who finds it hard NOT to think of the unofficial video for this (the NSFW one) when listening to it. Not sure if I'd call it spoiled, exactly.

Another one in the series of our favourite records of the past 10 years. This one was Supreme Clientele, as chosen by Neil Ashman. Read his re-assessment of it here. Also engage in the discussion of it, obviously. That kind of stuff is firmly encouraged around these parts.

Mogwai released a live album CD/DVD combo this week, entitled Burning. You can read our review of that here. This is taken from it, and it's the song that used to accompany the Film4 adverts all those years ago. Remember when you had to PAY for Film4? Crazy.

Fresh from playing The Lexington the other week, El Guincho confirmed some more dates in the country the other day, and a new track to download, taken from his new record.

Dream-pop duo (you have to write that when talking about Beach House, it's the law) Beach House released an iTunes-only EP recently and titled it appropriately. On it was a new track. Of course, we don't have that new track, but another featured was 'Gila', which is this one. Read all about it here.

The Wednesday edition of A Brilliant Record From The 00s. Read about it here.

If I were emperor of the whole world, I would either a) ban Wendy Roby from writing about Everything Everything or b) make sure that she only ever writes about them. They got some more coverage for this very track in This Week's Singles.

What?! It's Arab Strap day on DiS? Why didn't anyone tell me before I started writing this damned thing? Oh well, guess I'll just have to lazily shoe-horn a track from them here. Some good bits, though.

Click here to listen to these week's Spotify playlist and here to browse our archive of Spoti-fried playlists.