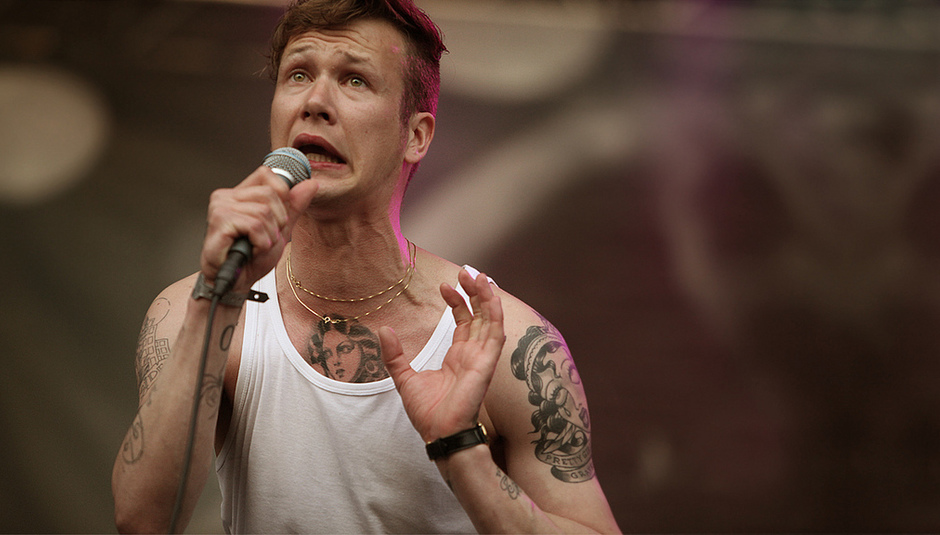 Following on from yesterday is going to be hard. Upping it even harder. Yet, each day has its own feel and different draw whether it's the American blockbusters of Pavement, Yeasayer and LCD Soundsystem or a day like today with a distinctly Norwegian flavour, all is good. Avoiding the festival site until after the torrential downpour which turned Karl Johans Gate into a shallow river for about 20 minutes, I yet again regret taking only one pair of shoes, but once more thank the organisers for the felt carpetted across the majority of the site. Missing Girls was perhaps a downpoint, but staying relatively dry a bonus.

After watching Susanne Sundfør play with nothing but a set of keys at Brighton's Unitarian Chapel back in May completely on a whim, it's intriguing to see her with a full band in front of thousands of her fellow countrywomen and men. That is, as opposed the 20 or so who were present at The Great Escape show. Sometimes less is more and, although I think that this could be the case with Sundfør, the tracks from her current album, The Brothel, need to have all the embellishments included, especially when playing on an open-air stage like this. Her face perhaps gives away a key to what makes her lyrically strong – that she always seems to be thinking, at least that's the expression conveyed to these eyes. The recurring themes are not buried, yet not protuding, making it all the more rewarding to not just listen to, but to get lost in. Although not as majestic as the previous time, the set is often as dazzling and as always bold as her extended eye-lashes, with the nocturnal nature of the new record's title track even working in this humid, airy environment.

Unfortunately my interview with the aforementiond Sundfør causes me to miss a couple of the acts who were noteworthy (see: Field Music) and at least one who were LOLworthy (see: Die Antwoord). On the other side of the Krone, The Flaming Lips are just about to start! Wayne Coyne became somewhat ubiquitous during this weekend. I'm not saying he was everywhere but he wasn't that far away at any point. Kind of expected him to be the bloke who came to clean my bathroom, all a bit John Malkovich. Once on stage, he did persistently mention the rain and sudden absence thereof, but they really brought the sun to the festival which, with all the orange on show, was fitting. The on-stage dancers (how they must tire!), confetti canons and various other contraptions never get tired, and nor does Mr Coyne, sitting atop a gorilla's shoulders – well, a man in a gorilla suit, but still, it wouldn't have been a surprise - for a short while. 'Do You Realize?' was as beautiful as ever and, I am sad to say, I missed the post-show moment where Coyne climbed into his zorbing thing and got as far as the moat, only to get stuck and struggle for a bit. Rubbish. The kids go nuts for John Olav Nilsen and his Gjengen in Norway. It is exactly the sort of thing that has been done to death in the UK, mainly in the middle part of the last decade, and this lot bear a resemblance to the more recent, such as The Libertines along with a firm nod towards the late '70s and early '80s of British groups like The Clash. Obviously in Norway they haven't had their guitar music saturated with ten-a-penny rip-off merchants, so it appeals a lot more than to these British ears. That's not to say that John Olav Nilsen Og Gjengen are ripping anyone off – they're not. Not at all. Plus, the whole singing in Norwegian thing adds a novel twist to it all. The charisma abounds from Nilsen and pretty much bounces off every single person in the audience and the whole performance is manically passionate if slightly out of sync.

It's no exaggeration to mention how intolerable La Roux are to me. However, for some beguiling reason, I manage to more than just tolerate it all today. It was in fact quite enjoyable, even with the constant high-register vocals. Heck, maybe even because of them. It's the type of thing you'd at least expect, though, now their music has expanded across to many other far-flung lands such as this one. Stand-up drumming on an electronic kit always goes down a treat too, and even a verse of 'Bulletproof' is muttered from my lips. Revelatory? Not quite. A good laugh? Def. Swedish headliner Robyn is not so much loved as adored tonight with the largest crowd of the entire festival. She strides onto the stage wearing red velour hotpants and, at a conservative estimate, about six belts. 'Show Me Love' was endured and enjoyed at the same time. You also get the feeling that it's only a matter of mere months before Robyn gets a stage with multi-gym facilities, so often does she engage in casual excercises whilst performing. Necessary? I'd probably think so.

The rain had well and truly abated for the final day and Oslo was back to being stinkingly gorgeous, bathed in sunshine near enough from start to finish. Well, until it got dark, anyway. This left a few strategic trips into the shade and under cover but for the most part I avoid looking like the stereotypical red-faced Brit abroad – something which would have been more than embarassing in a country full of people with equally pale but rarely red skin but on the whole more beautiful faces.

Cheese and biscuits is what Ost & Kjex's name translates to in English. An odd name, sure, but not enough to really take notice that it may have some meaning besides being an obvious combination of late-course foodstuffs. However, I am told that their first gig involved them smashing and squishing assorted blocks of cheese onto and into their microphones and then manipulating the sound from there. Bizarre. They got asked back but told to bring their own microphones, which seems perfectly fair. From this distance I see none of this behaviour (and a waste of cheese it would be) but I do see the duo having as good a time as can be had without the introduction of cheese, manifested in a range of genres from the electronic boogie-beats to straight-up pop, complete with female backing choir. Just as well, the cheese would have melted quick-fast in this heat and that is no laughing matter. It's a close-run thing between Paul Weller's hair and his solo career as to which is more perplexing. The fully-grey mat of hair sprouting from his head is, undoubtedly, an awful, awful style and much of his recent output has been of a similar colour. With a 50-odd minute slot in mid-afternoon there are a few crowd-pleasers but nothing too obvious. A drop of Style Council and so on. Slightly amazing that it's his first show in the country, but he seems happy to be here now – and who on earth wouldn't be? There is also a new track with a riff almost indentical to 'Teenage Kicks' but Paul is such a bloody geezer he doesn't care.

On the other end of the scale now and as engaging and occasionally adrenalin-pumpingly good as droney-metal type music can be in, say, a bedroom late at night in December, on a hot summer's afternoon in a damp tent it kind of loses some of the setting and appeal. Altaar move from “ah, this is pretty neat” territory to “hmmmm, could really do with changing the tempo or doing SOMETHING here” fairly quickly, although it seems to last a lifetime. Taking them in in a dingy, dark cavern somewhere would no doubt be fantastic, but something is missing here today and it's either the band's fault or my attention span. Time to lighten the mood.

Having seen the genuine wonder of Karpe Diem in Bergen in May I conclude that missing them today would be a mistake. Sure, the fact that they rap in Norwegian does present a barrier of pure understanding, but there are certain things which don't need much understanding, and that is just how entertaining Karpe Diem are. As far as I'm informed, they are “good boys” so probably aren't rapping about much that is too depraved, although 'Krølla 50-lapp Y'all' with its chorus mimicking Wu Tang's 'C.R.E.A.M' does appear to be about money, and 50 Krone notes are indeed green. Plenty of shout-outs to Oslo go down a storm, too, unsurprisingly. Everything is done with a grin and received similarly by the crowds, although I'm unsure how much of a novelty act they are over here. Not much I hope, because I am starting to love them. As much as a two-hour Motorpsycho set appears to be a good idea, the prospect of actually seeing any of it receded with the realisation of moving around far too much in a short period of time and getting squashed in the rush for The xx. As it turns out this happens anyway, but best intentions remained intact. The previous time I'd seen the then-four-piece was in a tent on a Sunday afternoon at 3 O'Clock, about a year ago. They were a bit flaccid, but by now their star has risen far higher in the sky. Tonight it is regrettably much the same, though on a larger scale and with more annoying people in my vicinity. It's hard to work out just why the consensus is that they fall flat in situations like this but it's probably some bollocks about the “intimacy” of their (very good) debut record. As it turns out the fireworks were infinitely more interesting. Once you've seen one, you've seen them all. The xx's shows that is, not fireworks.

The short walk back to the hotel through the lightshow above the Opera House gave more than enough time to reflect on how successful a festival Øya is, not just with regards to the music but the whole organisation, the feel of the festival and the location – it's as good as in the centre of Oslo. Naturally, a lot of the great feeling at the festival is because it's in Norway and is thus populated by Norwegians which, despite shouty screamy woman during The xx, is almost always a good thing. There is no loutish behaviour, no rowdiness and even the drunk are incredibly well behaved. You just don't have to worry about anything, anything at all. Nor do you feel like going to a festival with an unbelievably dense population of Carling-swilling morons ever again. It's just better like this.

Click here to read Part I of our coverage.