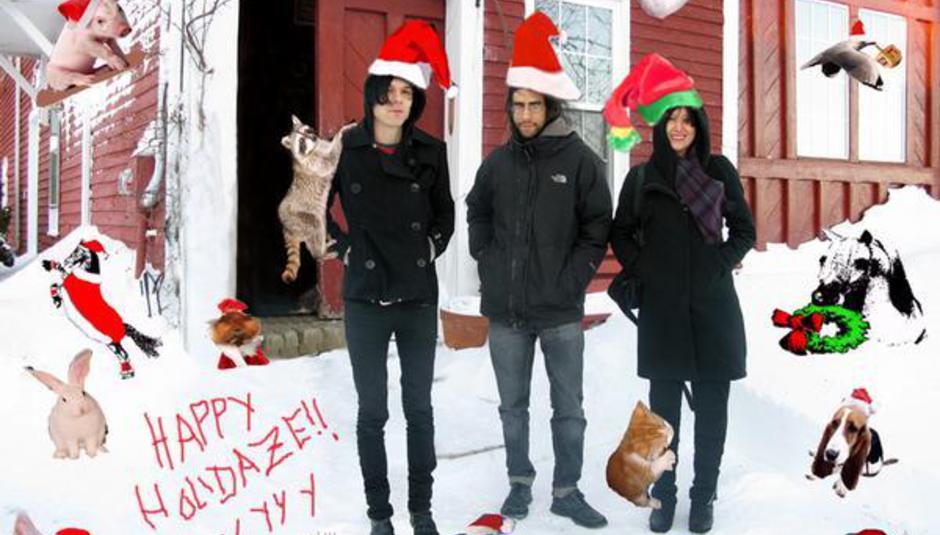 Every Friday we bring you a large chunk of our weekly content but in the form of a Spotify playlist...this week is no different, obviously. If you don't have Spotify, you're missing out on some free music streaming utility SERVICE. Click on the above link to get it.

Yanno, it's December now, something which most sensible people use as a gauge to begin anything remotely festive, and it's a fair cop. With a song title like this from the vastly underrated Veils, how could we possibly not? Oh, yeah, and it also includes the line "some day, a little rain is bound to fall"_ which, if you've been living in London (or pretty much anywhere else in the country this week) has been EVERY BLOODY DAY. Finn Andrews, the main behind the veil(s) chose his five favourite records of 2009 for us here, tis a good list.

There are times when you walk away from a live show, your life and being nearly affirmed from what you saw and heard. They are the times when all the badness and negativity wash away. The Yeah Yeah Yeahs' performance at Brixton Academy on Monday was one such occasion. This one's taken from this year's It's Blitz! and, if you listen carefully (or without care...) the line in the chorus sounds like "It's Derek!". Childish.

It feels, at times, like the superstar megastar artists of the year (or the female ones, at least) are starting to bleed into "our" world. We had Solange Knowles covering Dirty Projectors, and her sister saying she appreciates the work of Of Montreal. Kevin Barnes extended his artistic hand Beyonce's way earlier this week. Hook up?

I don't know quite why, but this reminds me of an old Happy Hardcore tape I bought from the Netherlands way back in 1996, when I was 10. It had some CRAZY Dutch song on it called Klappus In Je Handjes by Gabberwijffie. I love the way how some of it sounds almost English. But not. Anyway, this is Kap Bambino, whose track 'Deadtheme' featured in This Week's Singles.

As you've been told many a time before, it's not always easy to locate the VERY SPECIFIC track that you're looking for on Spotify, so you have to settle for second best. Today is one of these occasions. We aired Delphic's new video for 'Doubt'.

Another one of our favourite artists choosing their favourite records from the past year, John Stanier of Battles kicked things off for us. It seems like an absolute age since they released Mirrored, but the quality hasn't diminished one bit, as is evident in the furious, pulsating drive of 'Ddiamondd'.

There was a fair degree of mystery surrounding Shearwater's new LP, when details were announced a couple of weeks ago. Some of that has now been lifted, with the free download of 'Castaways', taken from that very album. Should you ever forget what a good record Rook is, listen to a few tracks off it, it'll all come clear pretty swiftly.

Another choice cut from an artist featured in This Week's Singles reviewed by resident Singles Lady Wendy Roby. This sounds a fair bit like another track doesn't it?! But what?!...

As good as this track, and Neon Bible is, you feel that it needs much more BEEF to it. TURN THE DRUMS UP. I WANT TO BE ABLE TO HEAR THE BASS. SHUT THOSE CELLISTS THE HELL UP. GET RID OF THE BACKING VOCALS. Regardless, fans of the band will be pleased to know they're working with Markus Dravs for album three.

This one is a rare gem - a track from the Singles what we've actually managed to locate! How annoying is that vocal at the start? Fairly, but it gets better. POUNDS, it does.

Some of Sky Larkin (the singerwoman, Katie Harkin) featured in the video for HUNKS + Friends 'The Magic of Christmas', which we had the premiere for. As I said at the time, some of the jumpers on display are nothing short of inspiringly beautiful, much like the aformentioned singerwoman's voice, as demonstrated in 'Antibodies'.

'Beautiful', however, is not one word you'd use to describe fellow Yorkshirerians Rolo Tomassi's lead singer, Eva Spence, in most cases. She can howl with the best of them. In this particular track, though, it's all toned down and there's even a few delicate moments. Her brother, James Spence told us his five favourite albums of the year earlier in the week.

I know, I know, they were in last week's Spotifriday playlist too, but they've been off the radar for a while and they are quite special. They announced their UK tour on Tuesday.

What better way to end this week's Spotify playlist with the unsung hero of Merriweather Post Pavillion that is 'Lion In A Coma'. Sure, you've got your Brother Sports, My Girlss and Summertime Clothess, but they get all the praise in the world. This is much better! We reviewed (before our system decided to engage in an act of self-mutilation on an unprecedented scale) their new EP, Fall Be Kind, here.

Click here to have a gander through ALL of our Spotify playlists - of which there are MANY.