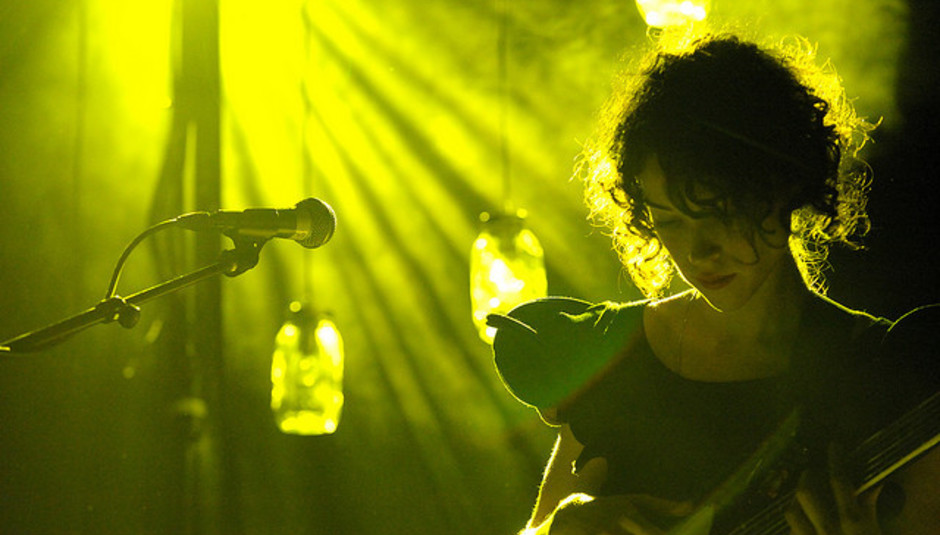 This week's content themed Spotify playlist featuring St. Vincent, Death Cab For Cutie, The Antlers, Lady Gaga, Patrick Wolf and a few more, for good measure. Click here to listen to it, will you!

We nearly had a party ourselves when we found out that Annie Clark is to release her new record in September. But we didn't. We're saving the festivities for when the actual record, which is called Strange Mercy, comes out. That's September, by the way. September 12. 4AD.

The new Battles record, Gloss Drop, is quite good. Problem is that it just isn't VERY GOOD. I hesitate to use the word "disappointing" but some of it does verge on it, despite the peaks actually still being quite high. Well, that's my personal verdict anyway. For the official DiS review head here.

For so long I thought that Tom Vek was American. In fact it wasn't until his comeback that I found out he wasn't and I am still unsure if this makes him less or more cool. Either way, American or British, his new record comes out on Monday and was reviewed here. Some good bits in it, innit.

5. Emmy The Great - 'Edward Is Deadwood'

We've had an Emmy The Great overload this week, of sorts. On Monday she compiled a mixtape for us, for Mixtape Monday, obviously then, a couple of days ago she released a video for 'Iris' and yesterday some tour dates were announced. New album out soon, in case you didn't work it out.

Single of the Week. Wendy Roby says: "One Handed are one of perhaps ten labels I trust almost implicitly, however oxymoronic that may sound. This means I have to Do It Properly and listen hard to their releases, rather than making a snap judgement based solely on the aesthetic perfection (or otherwise) of the sleeve / inanity of the press release / hairstyle of the artist. And although you (as in, you) should never underestimate the transgressive joy of frisbeeing a promo CD into the bin based solely on an ill-chosen font - especially if it plops, satisfyingly, like a fantasy Jordan dunk – you would be plain wrong to glance over what is happening here. It will appeal to those of you drunk on the joys of Tune-Yards, it will ring McFerrin bells in the heads of those who like their vocals polyphonically looped into something woozily other, AND it will vex those who think songs like The Beatles’ ‘Blackbird’ should not be messed with, like, ever."

So, this is another remastered slash remixed version of a popular song. Naturally, it was also reworked to be the theme tune to 'The Osbournes'. Christ that seems like a long time ago. Anyway, read our verdict of the reissues here.

Who are the band with the biggest disparity in "band name quality" and "music quality"? These guys have to be close because, let's be frank, they have an unfathomably terrible band name. Their new record, Codes and Keys came out on May 30 and here is our review of it. S'alright.

OK, hardly one of Patrick Wolf's most recent tracks, but certainly one of his best. We picked the man's brains in an interview which went live this week.

10. The Antlers - 'Every Night My Teeth Are Falling Out'

Our editor has almost nailed his colours to the mast for The Antlers' new record, and there were a couple of articles on them to read this week. The first was an interview and the second was the announcement of some November tour dates.

Speaking of our editor, he also dusted off his typewriter and reviewed the new Lady Gaga record. It's definitely a tract on a lot of things that is worth reading, which you can do so here.

12. Gil Scott-Heron - 'The Revolution Will Not Be Televised'

This is definitely last but by no means least. At all. Gil Scott-Heron unfortunately died last week, a great man he was. Tributes compiled here.

Click here to listen to this week's Spotifriday playlist and here to browse through our archives.