Blizzard of Ozz/Diary of a Madman (reissues) 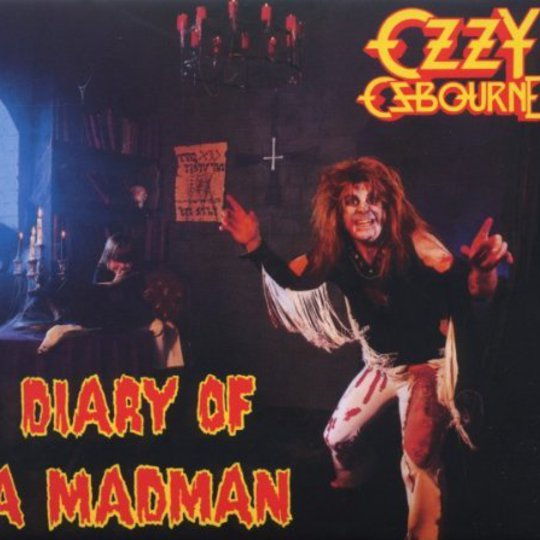 There's something that underpins all teen rebellion. Whatever you do, it has to be something your parents don't like. Playing loud music is ideal. Extreme volume pisses everyone off, especially in the morning and late evening, but how does one really crank that up to 11? These days it tends to involve getting a phone out on the back of the bus and blasting out mp3s. In the Eighties, music wasn't quite as portable. Walkmans were everywhere later on in the decade, true; but the majority of listening for most teens was still at home. Tapes and vinyl. And everyone cops their idea of teen cool from older, cooler kids. So it was with my family, and my sister. Heavy metal was in full swing, still carrying some generally nasty counter-cultural weight for the sixth formers as we started school. I vaguely recall a larger, spottier lad with a patch covered schoolbag exhorting the wonders of early Megadeth to me, for example.

My sister got into metal much earlier, and way more than I did, but foolishly didn't have a lock on her door. This meant my brother and I got to nip into her room, and ransack her collection. There was a lot of W.A.S.P and Iron Maiden, but one of the key records was Blizzard of Ozz. I listened to it regularly, without knowing the context of Sabbath, without knowing that Alba weren't really a manufacturer of high end sound systems, for a couple of months.

Coming back to a reissued, remastered Blizzard... 20 years later, the track listing wasn't as remembered. 'I Don't Know', the opening track, I'd forgotten entirely. It's a generic rock and roll call to arms, with lyrics that tell the listener to go and find out for themselves, and to make their own choices rather than look for leaders to make choices for them. A noble notion and effort, but fairly bland, the rest of the band clinging onto Randy Rhoads' coat tails, until an almost soft rock middle eight breaks up the action. The album really starts in earnest on 'Crazy Train', a track now entrenched as a Rock Classic. Bob Daisley, a journeyman songwriter, formerly of Chicken Shack and Rainbow donates some staggeringly effective bass while Rhoads wails. 'Goodbye to Romance' is pretty, a middling Beatles influenced ballad with a hole just the right shape for a 30 second guitar solo. 'Dee' is a brief but nimble acoustic guitar interlude inserted to cleanse the palate before 'Suicide Solution' kicks in. A song dedicated to drinking yourself to death, with an insistent bass line and a brutal, thudding riff that must have caused thousands of cases of whiplash over the years. Listening to it now, my teenage self still urges me to throw the horns.

But even that monolith doesn't top 'Mr Crowley'. Written about Aleister Crowley, with a massively over the top gothic keyboard intro that shifts between speakers, extended jaw-dropping solos, and tongue in cheek lyrics, it exudes Heavy Metal. If a song could wear studded black denim, this would be the one. With those two killers ending side one and opening side two, there's no surprise that nothing really tops them for the rest of the remaining running time. One of the collector carrots for the reissue is 'RR', a Randy Rhoads studio take that sees him working out the riff of 'Over the Mountain' and then runs on to some immoderate fretwankery. An interesting curio, but for the enthusiast only. (9)

Diary of A Madman came a little over a year later, and the cover shows Ozzy Osbourne as a mad scientist, Dr Jekyll type creation. Take a second to look at the cover of Blizzard again. Even though the angle of the debuts cover is more flattering, and the haircut on the latter hardly improves things, there's no doubting this is a man who has put on a considerable amount of weight. A year of solid boozing piled on the excess to Diary of A Madman too. Luckily, the band are still on excellent form, perhaps leaning even harder on the talents of Rhoads to make average cuts like 'Flying High Again' seem more enthralling. Regardless, 'Over The Mountain' is a sterling way to open, recalling great Sabbath with a meaty guitar sound and Lee Kerslake's pinpoint drum fills. And the title track is an even better closer, eeriely detailing a decline into insanity from the end of a life. The double tracked guitars have Metallica written all over them, and there's no doubting the influence and power of the track. But overall Diary... is a let down in comparison to the album that preceded it. The compensation for the collector willing to buy the Legacy Edition is a Blizzard of Ozz Tour album. Whether you enjoy that disc depends on whether you like hearing a 30-year-old live recording revivified by studio mastery. While the core of the reissues don't sound significantly better than the originals, this live collection feels as crisp as a fresh banknote. Very good in theory, but in execution it feels a little sterile, a sanitised version of a living, breathing experience. Ozzy again and again asks the crowd to put their hands in the air, extended solos are worked in, and the crowd volume peaks at exactly the right moment with a little help from the mix. Ozzy himself is very close to note perfect throughout, and a cynic might wonder... if the rest sounds so good, might best vocal takes have been stitched, pitch corrected? Those of a less jaded nature will find a world class singer at the height of his powers, and particularly enjoy the Sabbath material being tackled with enthusiasm by musicians who must have known their performances were being measured against the studio originals. 'Children Of The Grave' and 'Paranoid' are particularly impressive. Overall, as a package deal, this version of Diary Of A Madman is better than decent. (7)

But is there enough incentive to re-purchase these albums if you have the originals lurking somewhere? Perhaps not. You're better off turning the volume up and hearing them as originally intended. The uninitiated will definitely find enough to maintain their interest here though, and the beginning is as good a place to start as any. Thirty years on, Uncle Ozzy still has the solution.