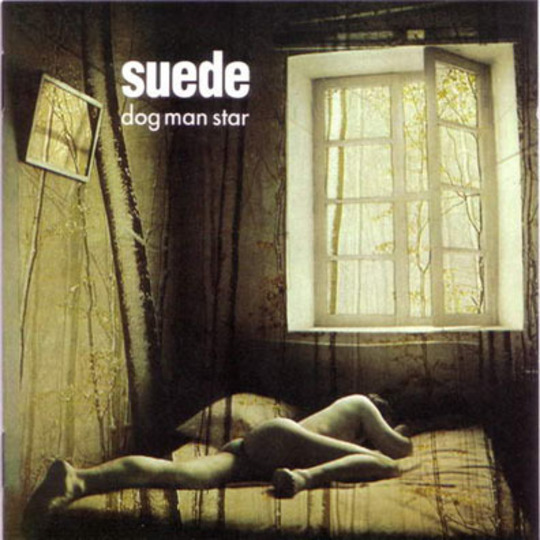 “What's that playing in the background?”

“Are you OK? I'm coming over to your house now.”

That isn't to say that I thought it was a depressing record, back then. Instead Dog Man Star was a record that was on my part considered complete, a solid mass of emotion in music form. When I heard someone playing it on the other end of a phone line, there was a tacit understanding that they were feeling melancholic for some reason or other. Far away from the pop hits of Suede's debut, Dog Man Star was about dirty sheets, in rooms with dirty windows, and outside a grey sky. What was worse was that behind those clouds there was a memory of sunshine. As acknowledged by Brett on the interview section of the DVD, Scott Walker's 3 and 4 were touchstones in more ways than one. And with Bernard trying to muster the same kind of emotional intensity as Joy Division in the music, it's no surprise that the album is generally placed alongside Third/Sister Lovers by Big Star as one of the most heartbreaking records of all time.

It was a superb record, but not one without flaws. The mix was very dense indeed, muddy almost, and the legendarily acrimonious departure of Butler left the band to finish off the weakest track with the help of a session guitarist. At the end of Brett's strangely touching sleeve notes, he admits that in hindsight 'The Power' should have been replaced by the glam stomp powerhouse of 'Killing of a Flash Boy' and 'My Dark Star'. But there's no Morrissey-like revisionism here, and the original tracklisting remains. The mastering and mix are slightly different, just fresh enough to sound better, with less murk and more sparkle. It doesn't sound like a modern recording still, but it will please those who wanted a classic album to sound better. It definitely does, with 'Still Life' gaining the most from the process, a little bit of edge added to the guitar here and there, a little extra depth in the strings. It takes a couple of listens to notice, and direct comparison against the original is recommended for the hardcore audiophiles amongst you. So far, so good. At the end of the album proper, four demos show you what awful sound quality is really like. With work in progress lyrics and unfocused musicianship, their tacked on to the first disc inclusion is a mystery that only completists will be able to solve.

The second CD sparingly adds a few more morsels. Destroying the value of your singles collection one reissue at a time, 'This World Needs A Father' and 'Eno's Introducing the Band' from 'The Wild Ones' are finally issued on a Suede album. Both are good if slightly inconsequential tracks. Butler pretends to be Mick Ronson again on the former, and Eno adds Eno-esque space to the mix and little else. It transpires that 'The Power' is still an average number when sung in French, but perhaps the biggest let down of the reissue is the original unedited version of 'The Asphalt World'. Mooted to be a mouthwatering 17 minutes long many years ago, perhaps jokingly, this version clocks in at a mere 11.27. Dreams of Bernard's best unheard solo peter into nothing as it is effectively a studio demo take. That said, there is an interesting alternate lyric that suggests the song might not have been originally written about Anderson and Albarn's tug of love relationship with Justine Frischmann.

On to the DVD, that in reality you'll probably watch only once. The 'Stay Together' video is sensationally dated. With a horrible wibbly post production special effect distorting the frame, saturated colour film band footage intercut with grainy black and white and literal images from the story of the song... it is a film student nightmare. Brett is also rocking a slightly larger than necessary earring that makes him look like an extremely camp pirate. At least it isn't the long version, so you're only losing a couple of minutes of your life that you'll never get get back.

The tour films are much more interesting. With the addition of the original songs soundtracking them, the well made shorts become videos in their own right and are a worthwhile watch. 'Heroine' is notable, heavily influenced by German expressionism, a man making himself up as a woman the directors play about with perspective and silhouette. Themes from the album crop up literally throughout the films, and if you can get past that and the terrible Nineties haircuts sported by the actors, it's fair to say they are the most interesting part of the DVD. Both Paris live sets included are flawed, notable only for Butler's presence onstage and the poor camerawork and sound. Brett and Bernard being interviewed together in the same room won't fill those obsessed with a full band reunion with hope, either. Their body language is wildly different, Bernard crossed up and submissive while Brett leans towards the camera and dominates conversation. The interview fills in a few gaps, especially when Butler talks about the writing process, and opens up, almost apologetically about 'digging holes' and damaging band relationships. But that avenue isn't explored further, and the interplay between the two interviewees is a stilted at best.

On the whole, the reissue is a historical time capsule, padded with endless ephemera. It doesn't detract too much from the core work , arguably the greatest British album of the Nineties. But a little more quality control would have gone a long way to making this album an essential purchase for people who don't sleep with a Suede poster in their bedroom.