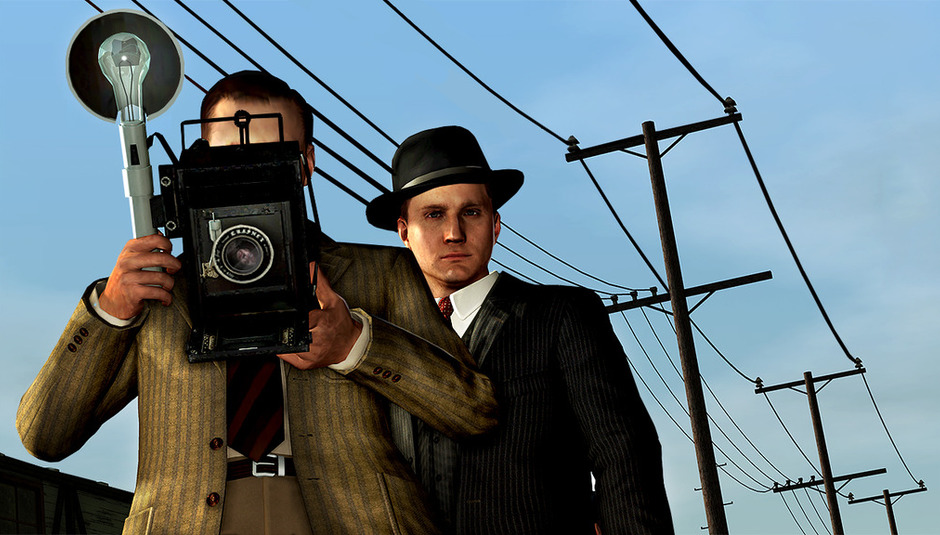 (A games column for the curious, not the hardcore)

Unless you have been living under a particularly large rock right at the centre of an enormous desert, on a planet several light-years beyond humanity's reach – there or thereabouts, anyway – you've heard all about L.A. Noire. The latest game-changer from Rockstar, developed alongside Australian indie Team Bondi, looks to do for 1940s detective stories what their previous title, Red Dead Redemption, did for Wild West folklore. In many respects the game is a success: it looks beautiful (better on the PlayStation 3 than Xbox 360, but the Microsoft machine still delivers), the dialogue crackles with fine performances, and the much-mentioned MotionScan technology captures the actors' faces like no game has before, leading to some truly enthralling moments across the title's 20 hours or so of play time. But while L.A. Noire is a massive step forwards in terms of closing the gap between game and film, by prioritising its forking narrative it does skimp on some gameplay refinements – the shooting isn't as intense as instances of gun battles were in either Red Dead or Grand Theft Auto IV, and whatever vehicle the player decides to take out for a spin through the Los Angeles of 1947, you rarely feel that much of a difference between wheels. With the exception of that hidden camper. Useful... or not.

L.A. Noire might seem to be a shoo-in for game of the year, before we're even halfway through 2011, if much of the (admittedly non-gaming) press is to be believed. But while it's very much the release of the moment, don't overlook some crackers to have emerged in the last six months. Portal 2 is one of the finest puzzle games ever, a vast improvement on its predecessor which will make you laugh and cry in roughly equal amounts, the former through the highly amusing script, the latter through some fiendishly complicated conundrums. Be warned, though: it's on the short side, so look for a money-off deal before parting with your cash. Crysis 2, the sequel to the PC-only title of 2007, is a fine-looking alien-invasion first-person shooter that stands out in a crowded market by actually giving the solo-player campaign some real substance. Some of its set-pieces are among the best seen in any video game, and even on the 360 it looks gorgeous. It plays with cliché, but is absorbing enough to never have the player doubting the abilities and responsibilities of its protagonist. Finally, the new Mortal Kombat is brilliantly brutal – hard to master but effortless to pick up for some multi-player fun after a couple of beers.

This month, what with L.A. Noire topping sales charts, it's a good time to look at some of Rockstar's less-widely-celebrated releases – those without large-scale sandbox worlds to explore and kill people within.

Back in 1999, they handled Earthworm Jim 3D for the Nintendo 64. Given the success of previous titles featuring the spacesuit-rocking lumbricus, you'd have thought a Mario 64-styled take on the character's adventures would be a sure-fire hit. Oops. A prolonged gestation saw the game switch between several publishers, so come Rockstar's involvement the emphasis was on rush-release rather than further development. The results: unspectacular.

But it's one of very few duff notes in the company's continuing victory march. In 2001, Rockstar worked on the PlayStation2 version of Oni, a near-future-set hack-and-shoot-em-up which took several cues from the anime movie Ghost in the Shell. It went down a storm with gamers who embraced both the hand-to-hand combat aspects and the arsenal-acquiring shooting side of the release. Their arcade-style racers of the Midnight Run series offer high-speed thrills comparable to the Burnout games.

Finally, two games that certainly utilise similar mechanics to the 3D GTA series: Bully and The Warriors. The former is a very enjoyable action/adventure game set in a fictional boarding school. Controversial at the time – OMG, you can kiss guys, as a guy! – it's aged fairly decently since its 2006 release on the PS2 (an expanded version appeared for the 360 and PC two years later). The Warriors, meanwhile, serves as a companion piece to the cult 1979 flick of the same name. Released in 2005 for the PS2, it's fairly linear, but faithful to the atmosphere of the movie – that the player can control more than one member of the gang is a bonus, as is the fine soundtrack, with many tracks carried over from the film. All together: Can... you... DIG... IT?

Next month: a retro section that doesn't mention anything to do with Rockstar, promise.

IMPORTANT UPDATE: Due to a slight delay in bringing you this first installment of Savage Pixels, I can mention a certain E3 Expo which kicks off in Los Angeles on July 7. Expected to show face this year: Nintendo, with a brand-new home console (Project Café? Let's hope that working name soon becomes something with a little more zing to it) as well as Mario for the 3DS; a wealth of pants-wetting Silent Hill goodness for the PS3 and 360; EA sports excellence in the shapes of FIFA 12 (guess they'll have to ditch their promo shots with Kaka in a Real top) and Madden 12; and the small matter of Capcom's Street Fighter and Tekken mash-up. Further big titles due for a wheeling out: BioShock Infinite (expected in 2012 but, as a big BioShock fan, already on my horizon as one to be very excited for), the almost-out-already Saints Row, The Third (sandbox carnage with a cackle), and the new-look Tomb Raider, something of a reboot for the series that looks genuinely incredible. Just check the trailer below (Okay, it's all pre-rendered, like the first Arkham City trailer... but still, a definite 'maturing' of what was previously a kid-friendly franchise).

Find the official E3 website here. And now, onto other bits and bobs...

Bad news, fans of sci-fi RPG shooters-with-speaking: Mass Effect 3 has shifted from a quarter 4 release date to early 2012. Word is that the teaser trailer, featuring the Reapers (big, old, violent, squid-shaped) attacking London, isn't representative of what will appear in the game itself. In other words: no scaling the Gherkin to bat a Geth out of a 20th floor window. Batman: Arkham City isn't moving beyond Christmas, though, so good boys and girls can look forward to finding it in their stocking this year. The sequel to Arkham Asylum (see the game ending section, below), it's another stealthy beat-em-up with puzzle aspects – let's hope it's better at encouraging the player to turn Detective Mode off for a few minutes per hour. The summer (late August, at the moment) sees the long-awaited arrival of Deus Ex: Human Revolution. Developed by Eidos Montreal and published by Square Enix, the cyberpunk-styled action RPG has been setting pulses racing ever since its first trailers emerged. But trailers can be misleading, and all too often gameplay doesn't live up to pre-release promise - ahem Brink, ahem. Fingers crossed that the game's near-future (2027) real-world (Shanghai and Detroit are among the locations the player will visit) setting will lead to an enveloping experience.

Looking at June, the end of the month sees the Nintendo 3DS version of Ocarina of Time hit stores, the 1998 title given a three-dimensional makeover for the new handheld. Just keep the sick bag close by. PC, Xbox 360 and PS3 title Red Faction: Armageddon is a third-person shooter which will look to steal a little thunder away from the forthcoming titan of such releases, the new Modern Warfare (not out 'til November). Operating on a similar level of carnage, but more than likely with more laughs, is Duke Nukem Forever, out on June 10. The game's development began in 1997, so no pressure, guys.

No games column would be complete right now without a mention of Dead Island, so: here's the much-discussed, much-viewed and faintly controversial trailer for the zombies-on-a-tropical-island title, due out on December 31. It's not exactly 'incoming', but worth a look if you're one of... oooh, eight gamers in the world yet to take a peek. (You may need a YouTube account to verify your age for this one.)

RANDOM TOP FIVE OF THE MONTH

For no reason whatsoever, other than lists are cool. Sometimes. This month: The top five comebacks when sword-fighting in The Secret Of Monkey Island (Lucasarts, 1990). And why not...

1 Your haemorrhoids are flaring up again, eh?

2 So you got that job as janitor after all?

3 First, you'd better stop waving it like a feather duster.

4 I hope now you've learned to stop picking your nose.

AWESOME GAME ENDING OF THE MONTH

Contains spoilers, obviously. This month, given that Batman: Arkham City is likely to be one of the biggest (and best, he says) games of the final quarter of 2011, here's the ending (well, one of them – three are possible) of the first game in the current-gen series of the Caped Crusader's videogame adventures, Arkham Asylum (Eidos/Warner Bros/Rocksteady, 2009). Features a stupidly pumped-up Joker, full of the Titan formula. The bigger they are, and all that...