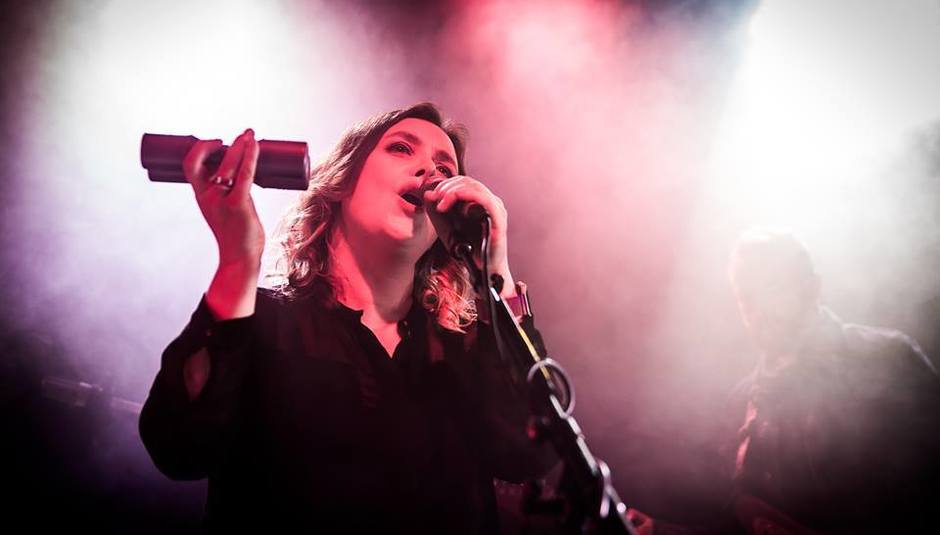 When Slowdive announced they were reuniting in January 2014 after a 19-year absence, it seemed like an easy opportunity to cash in on the reunion gravy train many of their peers had already embarked on. However, it soon became clear that this was anything but a cynical attempt at one last lucrative pay day. Having been unceremoniously dropped by Creation Records just days after the release of third album Pygmalion back in 1995, it seemed the band's lifespan had run its course just as the band's musical direction was taking its next voyage of discovery. So when Neil Halstead stated in October 2014 "I wouldn't want to go on tour just playing old songs" before adding "Our mindset is purely focused on making another record", many people stopped what they were doing and paid attention.

Certainly, that summer's glut of shows both in the UK and around the rest of the world had seen an unprecedented revival of interest in a band dismissed by many back in the day. If the inaugural comeback show at London's Village Underground wasn't proof enough of the band's popularity, celebratory performances in front of 35,000 people at Barcelona's Primavera Sound and almost the entire crowd at Green Man in August silenced any doubters that remained. Slowdive weren't just back with a vengeance, they'd quickly become one of the most sought after live acts on the planet and even though no new material was aired at any of the shows that year - understandable bearing in mind they'd never played anything from the aforementioned Pygmalion before those dates either - the previous disregard shown for them by certain sections of the music press was about as relevant now as yesterday's newspapers. 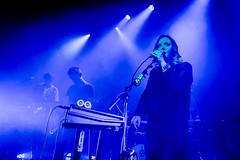 More importantly, the hunger to deliver something exceptional became a fervent driving point for Slowdive's continued existence, almost as if their reformation was purely a case of unfinished business on the band's part. So when they kicked off 2017 by releasing their first single in over 20 years, it seemed inevitable that a long-awaited fourth album would follow. And low and behold, on today of all days (28 March 2017), the imminent arrival of that self-titled record on 5 May was finally made public to the world.

We're here this evening in the homely confines of Liverpool Arts Club, one of a handful of tiny warm-up shows the band are playing during the last week in March. With a capacity of just 200 and a tiny stage that's barely big enough to fit all their equipment, never mind the band themselves, this is about as close it gets to a public rehearsal space. Indeed the cloak room doubles up as a dressing room for both Slowdive and tonight's support Ulrika Spacek, while the bar quickly runs out of all draught beers long before the headliners take to the stage. It really doesn't get much more intimate than this, which is just as well for a band whose army of rabid devotees has seen people travel from all over the UK and beyond to be here tonight.

For Ulrika Spacek, this also gives them an opportunity to road test new material in front of an audience not necessarily familiar with their older songs either. The five-piece line up are all louche and laidback, looking to all intents and purposes like a stripped down version of the Brian Jonestown Massacre. However, that's where the similarities end as musically, their sound lies somewhere between the elegant pastoral folk pop of Deerhunter and post-punk inspired dream pop the likes of Merchandise or DIIV have mastered so well in recent years. If anything, their sound has become more refined over time and newer numbers 'Full Of Men' and 'Mimi Pretend' quickly strike a chord, even with those waiting impatiently for Slowdive. Picking up the pace towards the end, most notably on 'Beta Male' and 'I Don't Know' off last year's debut The Album Paranoia, their short set proves appetizingly satisfying not only in preparation for this evening's main course, but also the June arrival of second LP Modern English Decoration. There's also a nice touch at the end when, some of their members being from Reading themselves, they pay homage to Slowdive's impact on the local music scene back home.

When Slowdive take to the stage, they're greeted with a chorus of immeasurably loud cheers before they've even played a note. Such is the admiration for their remarkable resurgence the band's shows have become something of a cathartic, quasi-religious experience. For the next hour and a half, it's almost possible to hear a pin drop out front such is the respectful silence afforded Slowdive throughout their set. Indeed, the only minor irritations are the number of mobile phones omnipresent for most of the set which Rachel Goswell lambasts early on.

Opening with 'Avalyn' from their first EP from 1990, which announces their arrival in all its pristine, ethereal beauty, Rachel Goswell and Neil Halstead's delectable harmonies both soothing yet chilling in equal measures, subtly delivered over its serene melody before being brought to life by Simon Scott's powerful drumming. Seemingly high in the mix this evening, it becomes noticeable from the outset what an important aspect of Slowdive's sound Scott contributes, often driving the compositions from one landscape to another with consummate ease. 'Catch The Breeze' follows, once again impeccably delivered with all the poise and panache that's become Slowdive's forte, particularly since their return. 'Crazy For You', one of only two songs in tonight's set from Pygmalion ('Blue Skied An' Clear' being the other) is next, while a haunting 'Machine Gun' gives way to the first of the three new songs played this evening.

As the first piece of new music to be released by Slowdive in 22 years, 'Star Roving' is already familiar to most, and no sooner have its first bars reverberated around the room than it immediately becomes a centre point of tonight's set. With its melody and structure slightly more uptempo than much of the band's material, it becomes an anthem of sorts and a song that's sure to play a big part in their live shows going forwards. 'Souvlaki Space Station' and 'When The Sun Hits' also sound cavernous, especially in this setting while a transient 'Alison' provides a delightful platform the next new song.

Having put out 'Sugar For The Pill' earlier in the day alongside the announcement for Slowdive, its mellow tones prove vaguely familiar to some. With a sound and structure that's perhaps more befitting of the band's Souvlaki era, it would suggest Slowdive may well be a record that draws inspiration from both Slowdive's past and present while placing one eye firmly on the future. Penultimate number 'She Calls' oozes tranquility, carefully administering the grand finale, a by now well accustomed but no less spine-tingling run through Syd Barrett's 'Golden Hair' which literally lifts the roof off the Arts Club, so devastatingly incendiary are Neil Halstead and Christian Savill's effects-laden guitar crescendos. 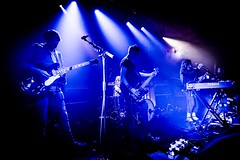 Returning for a three-song encore that draws from their earliest, embryonic phase ('Slowdive'), subsequent move into experimental territories ('40 Days', which still manages to sound immaculate even after a scuffed intro), and present ('No Longer Making Time', the third new song aired tonight and another that's destined to become a future Slowdive anthem). Quite simply, a live performance should be more than just about the songs. It should be mesmeric, an experience to look back on and savour for years. And when all's said and done, the experience of witnessing a live performance doesn't get any better than this.