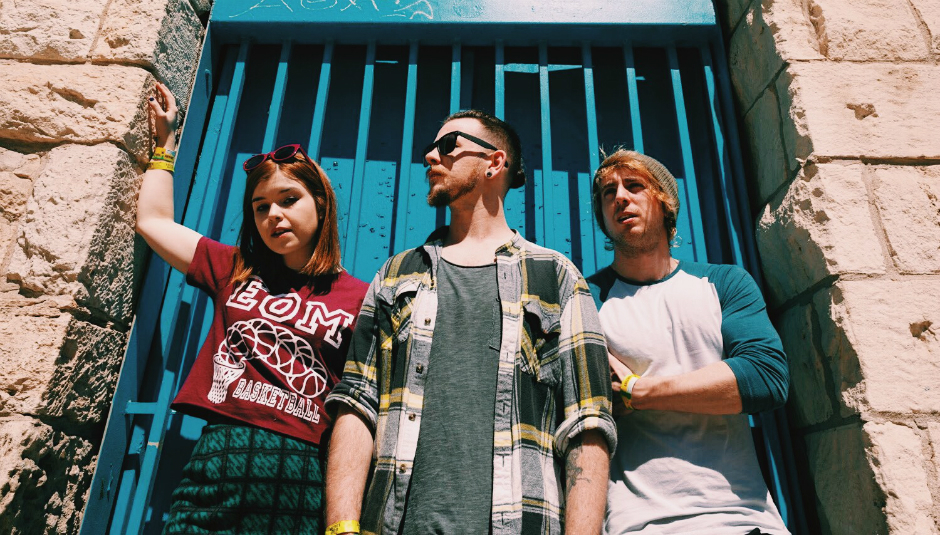 SXSW can be an overwhelming experience, particularly for young bands who are expected to play an exhausting number of shows in just a few days. Manchester trio False Advertising took it all in their stride though and documented their rollercoaster trip - and took some photos - just for us.

We packed our bags, guitars and drum stuff and headed to the airport to depart for TEXAS. On arrival in Houston, we hired a car and drove through America for the first time ever to Austin through the most torrential rainstorm you ever did see. Tired, we arrived at our Airbnb and went to a local Mexican for life-giving tacos. 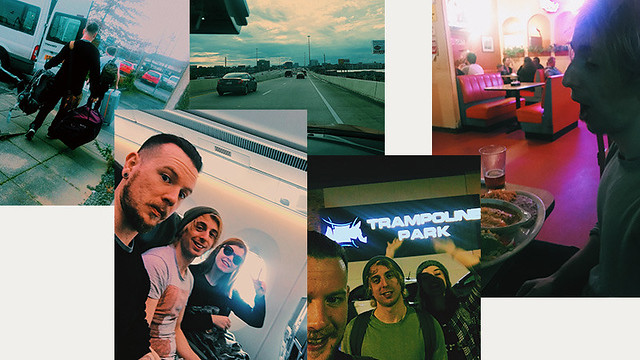 Sunday was our first taste of Austin and the festival. We went out for breakfast burgers (of course) first though, then headed over to wander around 6th Street, grab some drinks, and look around the convention centre. Turned out that the tech expo that was on is one of the best places for free beer you could ever imagine. But we also saw loads of sweet stuff there like a massive robotic arm, a box that made your head look massive, a programmable kick drum pedal, 3D VR Wacom tablets, and Nasa. 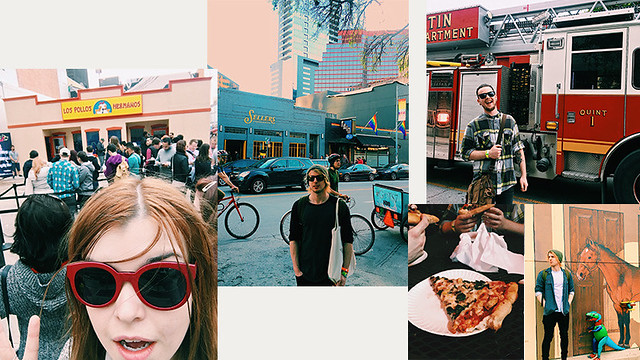 We headed out to get Pizza, then hit the British Music Embassy where we saw the awesome Flamingods and Elle Exxe. After that we bumped into Pinact and hilariously decided to go and see Smash Mouth (we’ve all been vibing on that 'All Star' song recently); the queue was long but Jen managed to get on the list because she’d tweeted them recently about how much she loves the song. There was a free bar too, oh god. After that we went to Hotel Vegas, but no one can remember much about that sadly; Josh apparently fell asleep at the bar. 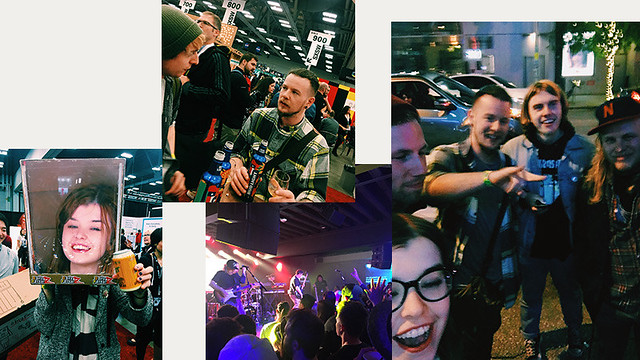 We spent the morning trying to recover from the night before by eating Dennys and Chipotle. Then hanging out at the Artist Village (there is always free food and drink there - who knew?!).

This was also the day that we found out about our friend and former DiS writer Dan Lucas very sadly and suddenly passing away. A big champion of our band and personal friend (he offered me tickets to see Prince once and we sat in the arena afterwards for ages singing ‘Dr Zaius’), he’d tweeted us a day or so before wishing us luck on our trip and saying he’d be with us ‘in spirit’. It was then we decided to do our best out there for him.

Monday’s entire evening was spent getting ready for our first showcase at The British Music Embassy. Before we played we watched SuperGlu - who we were all majorly impressed by, plus the awesome Doe and Muncie Girls. Aside from some slight stress about whether our British pedal boards would work in the USA, our first ever international show went pretty decently. We headed back to the place we were staying having met so many new people, it felt nice. 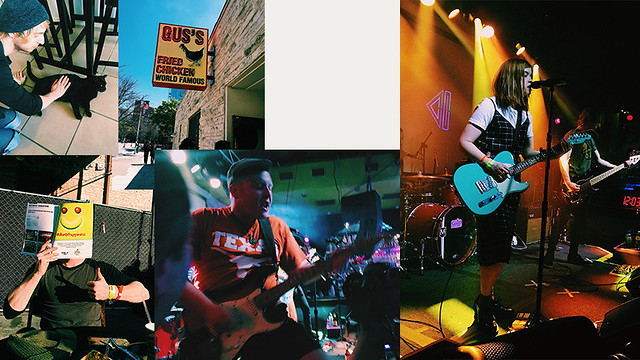 We got up not too late to catch some conference talks, then did a photoshoot around Austin in the crazy sunshine for a bit. Today was technically a day off so we ended up splitting up - Jen wandered about and caught Diet Cig and Sad13 at the She Shreds party (more free beer there), Chris and Josh saw Krist Novoselic from Nirvana in conversation on voting reform, but then Nardwaur turned up and hijacked the talk with quirky spells and by showering Krist with free gifts. Surreal.

We ended up meeting loads of friends at the Music Opening party at Maggie Maes after that, watching The Lemon Twigs who blew the room apart. After a quick Philly Cheese Steak we caught Tennis System at Barracuda - emo, shoegazy stuff. Afterwards we saw SuperGlu again (love those guys), Real Estate at Empire, then Fizzy Blood back across the road at Scratchouse. Then we hit up Magnolia Cafe for breakfast at 3.30am. 'Twas an intense, tiring day of joy. 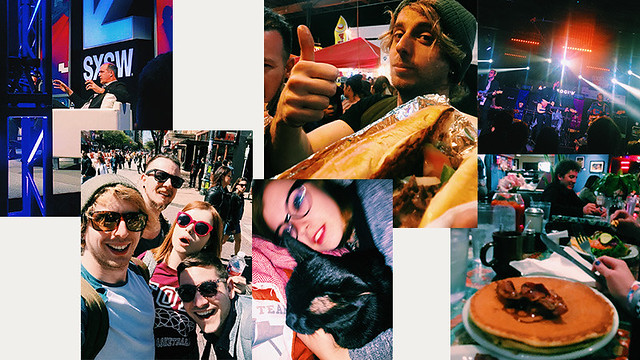 After such a fun day, we had to be a bit more chilled out time today to prepare for our second showcase in the evening. We went out to do another photoshoot for The Daily Cardinal, ate Kimchi fries, then went to the Artist Gifting Lounge to get a bunch of free stuff and send band related emails for a bit. Well, the gifting lounge was fairly good - Jen got a makeover (which she badly needed after the night before) and we all got free SXSW branded backpacks. Then we ate some delicious BBQ.

All was looking good for our second showcase at BD Rileys - we arrived, helped Leggy set up who were kind enough to share equipment with us (and had totally sick vocals), then realised that we were missing some equipment that we needed. However, after spending five minutes asking around, a very kind SXSW rep literally ran out of the venue and got us what we needed, arriving back with a cymbal stand and tom-tom with two minutes to spare. A lesson in proper preparation that one.

BD Rileys is an Irish pub with a pretty small stage with wooden railings all around it and massive open windows behind where the band play. Despite our earlier stresses, people got into our set while eating their buffalo wings and were superbly nice about our performance afterwards. It was cool. I think we’d gotten over some of our: "OMG, it’s our first ever international show" stresses by this point.

I had spent a while explaining to the others why it would be difficult to get in to see At The Drive In, who were playing down the road about an hour after we got offstage. So instead, we ended up going to see Lewis Del Mar and our absolute heroes Jimmy Eat World. I didn’t realise quite how much I love Jimmy Eat World. 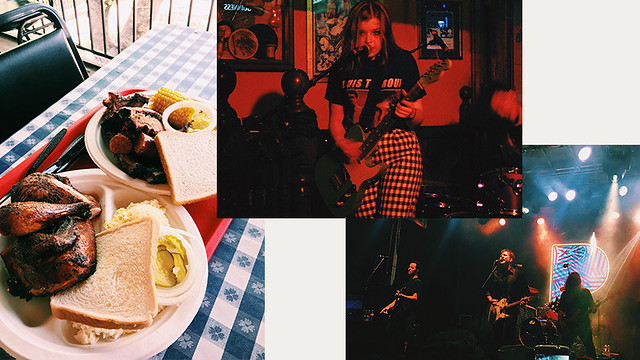 All was good, we hadn’t drunk too much the night before. We rose early enough to drive in to see Zane Lowe do his keynote, hang out, and then later play our third showcase in the afternoon.

But low and behold, we went to load in our hire car to find the back window had been smashed in, apparently a result of some hoodlums going on a ‘car smashing spree’ down the street in the middle of the night. Very luckily, we left no valuables in the car and it was covered by insurance, but a warning that the Texas streets can be tough.

We caught a few more panels, including a great one about ‘creating offline success’ where we met a super inspiring musician called Ron Pope. Josh also managed to catch a bit of Zane Lowe while Chris and Jen sorted the car stuff. But, we then got Chicken Fried Steaks at Moonshine grill. Have you ever heard of CFS? Imagine a steak about the size of that small playstation one console. Okay. Deep fry it like the Colonel. Then, cover that in a white gravy and black pepper sauce.

Trying to walk after that, we went and got ready for showcase #3 at The British Music Embassy for the Department of International Trade. It was sweet to play with Life for the first time, who are absolutely unbelievable. Again, we played to a room full of people many of whom had come to see us specifically - which is unbelievable for a small band from Manchester. We spoke at length to some of the audience afterwards (who stayed even after the free drinks had ended). Chris even managed to meet Rag‘n’Bone Man.

Later, we headed over to South Congress to a restaurant called Lucky Robot (and ate really good Okonomiyaki!), then we caught Go Go Penguin playing in a church before heading home pretty early. 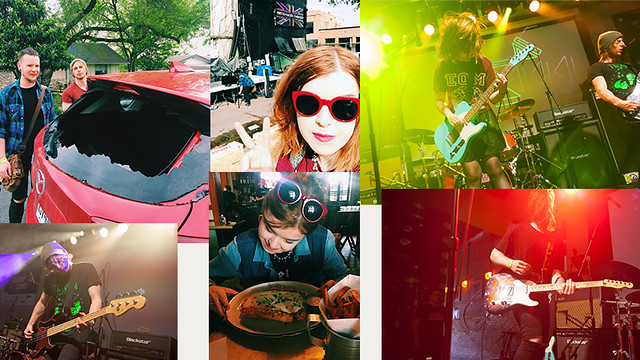 A day off! Some networking was done at The Embassy in the morning - where they had free healthy breakfast. Jen went to the Twin Peaks house and got free donuts and avocados. We checked out Her’s in the convention centre and did an interview for BBC Introducing. Then found an excellent source of free tacos.

Jen caught the fuzzy madness of The Parrots at Hotel Vegas, then we caught a bit of the sublime Living Body. Then everyone headed over to Maggie Maes for the DIY showcase to see Her’s again and Slotface, who killed it.

Then we split up, Jen seeing total buds Pinact’s fuzzy onslaught at Mohawk and WOMP, then sneaking into the 4AD party VIP section next door and getting frowned at by impersonating Future Islands’ intense vocal stylings in front of cool industry folks, while watching Future Islands.

Chris and Josh ended up seeing Mastodon at Empire, who were so tight, and really heavy. They didn't say a word to the crowd, they just went up, got on with it and smiled. Epic statement. After, they caught the end of Minus The Bear across the road, who weren’t allowed to do an encore no matter how hard they tried. 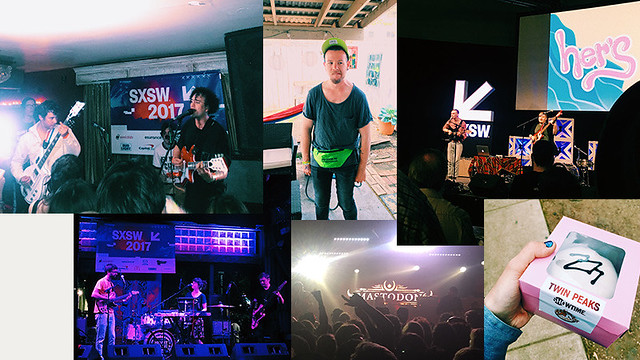 Got up at a good time and caught some more talks, which is good because it’s like we actually learned something while we were there (we really did honestly!). We headed to a different part of town - West 6th Street to play our last showcase in an outdoor bar which where the back of the drum riser was literally the street where cars were going past. It probably sounds worse than it was! The heat was absolutely blistering though, my sunglasses kept sliding down my face.

After a quick victory visit to Whole Foods for ice-cream sandwiches, we headed in to watch The British Music Embassy get its power shut down, then get its power put back on, to the relief of all the bands standing by. We saw Aquilo, then SuperGlu, then we managed to see a bit of Heck; never have I seen a band command a venue in that way, they were more like barbarians on the cusp of battle. They had a wall of death, and they ran around the venue making sure they stood, jumped, and bled on every surface venue had to offer.

We then went to see Paws, who are like a kinda Scottish Idlewild/Blink 182 mashup according to Josh, really good stuff though. Then we saw Diet Cig who, despite playing about 2,389 shows during the week, were still bouncing around the stage like it was show number one.

So tired, we got some victory hot wings at our fav ‘Grub House’ and then cried in the taxi home before sleeping and driving back to Houston, then flying to Manchester the next day.

Austin, it’s been magical, and we are so grateful for the sick, sick opportunity. 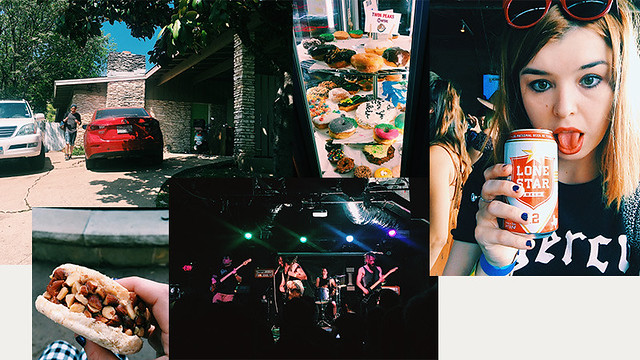 All photos courtesy of False Advertising.

The Legends' Track By Track Guide to ...