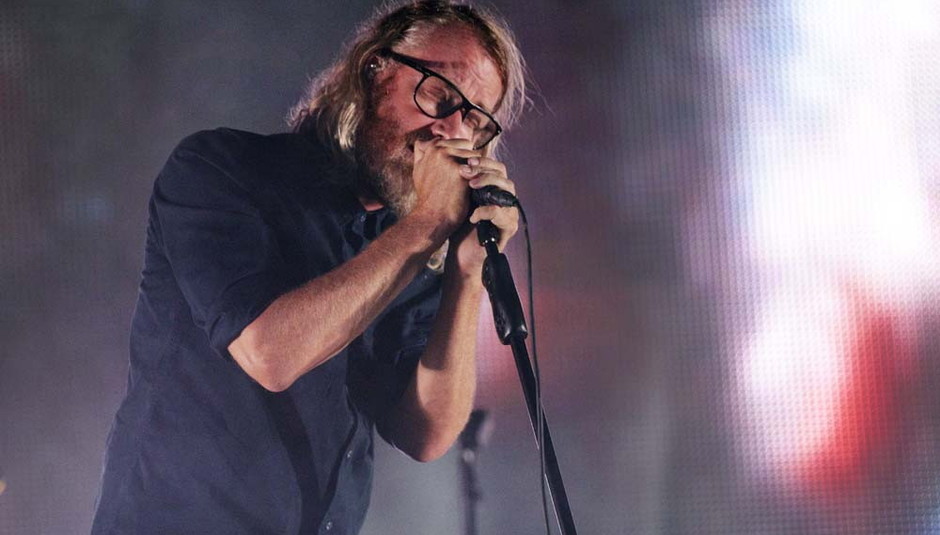 In a few hours time, 472 MPs will vote to renew the UK's Trident nuclear weapons system. It has little bearing on the events at Henham Park three days earlier, but with the shockwaves of last month's EU referendum still ringing in the air, these are uncertain and downright scary times. Where opposition parties want to become the party in power as its the only way they deem themselves electable, Boris Johnson is given the role of Foreign Secretary and the abominable Donald Trump looks set to become United States president, there's little wonder everyone looks so god damn petrified. Oh, and another iconic musician left this mortal coil too (R.I.P. Alan Vega).

So thank heavens for the 2016 edition of Latitude, a festival that's often lambasted as being too "middle class"...mostly by people who've never been. What they actually mean is there's a genuine sense of camaraderie, of community, a mutual respect for one another's welfare and well-being. Reading, Leeds, T In The Park or V this most definitely isn't. And that's before we even consider the line-up.

Where else would you get served frozen cocktails by Keith Allen? Or find one's self surreally entertained by Jane Horrocks reciting punk rock classics? Not to mention Adam Buxton interviewing Louis Theroux, or a comedy line-up that grabs the spotlight from Edinburgh's revered Comedy Festival and milks it for all its worth. There are free rides in gondolas, a multitude of woodland areas with all kinds of activities going on, an actual restaurant, poetry and literature arenas, and a pen of adorable sheep who've become something of a traditional landmark associated with the festival. No one pisses in a cup and throws it at the stage. It's bliss.

This year the organisers have introduced a new traffic management system which makes arriving onsite so much easier after a lengthy four-hour drive. That English summer rarity, the sun, is also shining, and barring a slight shower on Saturday evening, continues to do so for the duration of the weekend. DiS starts its musical adventure at the Sunrise Arena. The massively hyped Let's Eat Grandma have just arrived on stage and frankly, they're one of the most irritating cases of style over substance we've witnessed in a very long time, unless your idea of either involves a mutant Bonnie Longford being cloned in case the other one disappears while hand clapping one another and playing the odd note on what appears to be a children's Bontempi organ.

Lapsley is a far more palatable affair, albeit in an Adele-does-Portishead kinda way, while Weaves seemingly becomes more of a Yeah Yeah Yeahs pastiche with every passing show. Which is not to say we don't enjoy parts of either set, but just in small doses. So thank heavens for British Sea Power, whose fifty-minute set on the Obelisk (main) Stage provides just the tonic to kickstart our weekend. Two new songs (entitled 'Spark' and 'What I'm Doing') are aired betwixt the familiar sounds of 'No Lucifer' and 'Remember Me', both reaffirming their krautrock tendencies. Some people out front wave pieces of foliage in salute. It might be a fairly low key affair in terms of billing, but they're a national treasure, and one that shows no sign of waning with age.

Over in the BBC6 Arena, Mike Hadreas aka Perfume Genius is wowing a sizeable crowd. Not only by way of his heart-wrenching compositions, but also in terms of a performance that's made for stages of grander magnitude than this. 'Hood' and 'Queen' are delivered with sublime precision, while Hadreas even cracks a cheesy grin at the end, no doubt enamored by the reception just received. Back at the Sunrise Arena, Suuns manage to overcome initial sound problems by playing a blistering set of electronically focused psychedelia that keeps those who remained nonchalantly bobbing heads and shuffling feet until the bitter end.

We're also quite taken aback by The Big Moon who play a perky forty-five minutes set on The Lake Stage that's more memorable for their own songs than the now obligatory novelty cover of Madonna's 'Beautiful Stranger'. It's well executed, but more of an aside compared to the likes of 'Pull The Other One' and 'Sucker'. Not for the first time this weekend, DiS finds itself torn between two headliners, so although The Maccabees grab our attention for half an hour - and impeccably flawless they are too - it's Grimes that ends up stealing the show and Friday's crown as a result. For all this talk of GaGa, Perry, and Swift et al becoming the new Madonna, Claire Boucher has usurped them. Focusing mainly on material from last year's Art Angels, the record responsible for pushing her into the superstar bracket, it's an all-action, all-singing, and even more dancing collage wrapped in neon pink, and one that leads us into the woods after looking for more pop action.

The next morning, Pumarosa get Saturday off to an impressive start courtesy of their multi-faceted genre-transgressing ambient pop. Comparisons to Portishead, Moloko, and The Verve aren't wide of the mark, albeit not at the same juncture, while in energetic vocalist and focal point Isabel Munoz-Newsome, they have a genuine star in the making. The dulcet tones of Emma Pollock provide a soothing mid-afternoon accompaniment as DiS parks itself on one of the Sunrise Arena's ornately crafted tree stools, which is just as well because Money have us racing for the front of the stage again, thanks in no small part to Jamie Lee's engaging, if characteristically wry, deliveries of the bulk of recent album Suicide Songs.

That Frightened Rabbit still occupy the teatime slot rather than one of the higher echelons near the top of the bill remains a mystery, particularly when they can drop gems such as 'Get Out', 'Holy', and 'The Modern Leper' in the first three songs. Unsurprisingly, every song receives rapturous applause, with 'Keep Yourself Warm' in particular causing scenes of pandemonium. Surely a pivotal main stage beckons, but then how long have we been saying that?

Meilyr Jones might have cut his chops fronting indie experimentalists Racehorses at the turn of the decade, but his new guise as a mic grabbing, high kicking showman of Jarvis Cocker-esque proportions makes him destined for this generation's take on vaudeville. Songs like 'How To Recognise A Work Of Art' and 'Featured Artist' become more insatiable with every listen, and even when he berates two people for talking during 'Strange/Emotional' (yes one of them was me - slaps own wrist) everyone stops what they're doing for a few split seconds, gazing in awe at the stage instead.

For The National, Latitude has become something of a home from home where UK festivals are concerned. Making their third appearance in six years, and second as main stage headliners, it's little wonder a huge crowd has gathered out front to welcome them. Coming on stage to The Smiths' 'Please Please Please Let Me Get What I Want', Matt Berninger and his band might have a dour miserable side of their own but here, this evening, they're perfect Saturday night entertainment. Perhaps not surprisingly, tonight's set is very Trouble Will Find Me heavy, with eight of its thirteen songs featuring here, including a cameo from Chvurches' Lauren Mayberry on 'I Need My Girl'. Four new songs also receive an outing, the first two of which 'The Day I Die' and 'Find A Way' are brooding numbers not unlike Alligator's 'All The Wine' (the former) and Boxer's 'Slow Show' (the latter). Of the other two, 'The Lights' builds from Berninger's deftly accentuated vocal into a cacophonous roar not unlike Manchester band The Chameleons, undoubted influence from The National's early days, while 'I'm Gonna Keep You' once again delivers a crash course in intensity over some nifty guitar interchanges between the Dessner brothers. Elsewhere, 'England' is anthemic, 'Fake Empire' sadly prophetic, 'Mr November' majestic, and 'Terrible Love' riotous as Berninger enters the crowd handing out his microphone to random members of the audience. It goes without saying their return to UK shores is nothing short of sensational. New album and tour soon please.

Leeds trio Cowtown finish Saturday's proceedings during the early hours of Sunday morning (it does make sense if you think about it), their intelligently crafted if frantically executed lo-fi take on new wave punk keeping us entertained way past bedtime.

As Sunday lunchtime approaches, Minor Victories demonstrate why the whole is at least as good as the sum of its parts. Playing an uplifting and occasionally mesmerising set from their self-titled debut, they're a breathtaking opener and one that sets the standard exceptionally high for the rest of the day. Or at least should do until pandemonium breaks out in the BBC6 Arena. Internationally renowned singer/songwriter Ed Sheeran makes what's fast becoming a perennial guest appearance during Irish soul singer Foy Vance's set. And while not being particularly fond of either's largely generic wares, one has to admire Sheeran's tenacity and willingness to perform at such an event, especially when chased afterwards by a swarm of teenagers like some ginger-topped Pied Piper.

Nottingham trio Kagoule are fast becoming one of the most exciting guitar bands in the country, and this afternoon's set in front of a packed crowd in the Alcove proves to be one of the weekend's finest. Displaying a level of confidence that grows with every subsequent show, their blend of grunge, pop and punk is a winning formula, not least in the new songs aired here which render the follow-up to last year's debut Urth a mouthwatering prospect indeed.

Perth dream pop outfit Methyl Ethel also display a maturity beyond their years, albeit in a more sullen demeanour. Not that anyone minds, particularly when songs like 'Twilight Driving' and 'Shadowboxing' turn the Sunrise Arena into a canapé of many moving shapes and sizes. Back at the Alcove, The Magic Gang win the award for most deliriously enthusiastic band of the weekend, while M83's depressing transformation from ambient shoegazers to Daft Punk wannabes continues at a rate of knots.

It's left to iconic Mancunians New Order to bring Sunday evening and this year's Latitude to a close, which they do in style. Earlier in the day, those up at the crack of dawn might have heard them playing Joy Division classic 'She's Lost Control' during soundcheck, and while that doesn't make an appearance in the set, there's enough killer material contained within to fuel an adrenaline fuelled party reminiscent of the Hacienda's halcyon days. Last year's Music Complete might just be their best record in over two decades, and the decision to include five songs from the album during tonight's show would suggest Barney Sumner and co. know it too. 'Your Silent Face' is a welcome addition having been played a few weeks earlier at Denmark's Roskilde, while even 'Waiting For The Sirens' Call' from the heavily criticised album of the same name has become something of an enjoyable staple during this current round of shows. Predictably, 'Temptation' and 'Blue Monday' receive thunderous applause, both preempted by chants of each's refrain long before their arrival ("Ba ba ba ba ba ba ba ba bah bah bah" indeed). Finishing on a celebratory rendition of 'Love Will Tear Us Apart', probably THE perfect way to end a festival, New Order reaffirm both theirs and their former outfit's legendary status with some aplomb.

Latitude, you have been wonderful. See you next year!