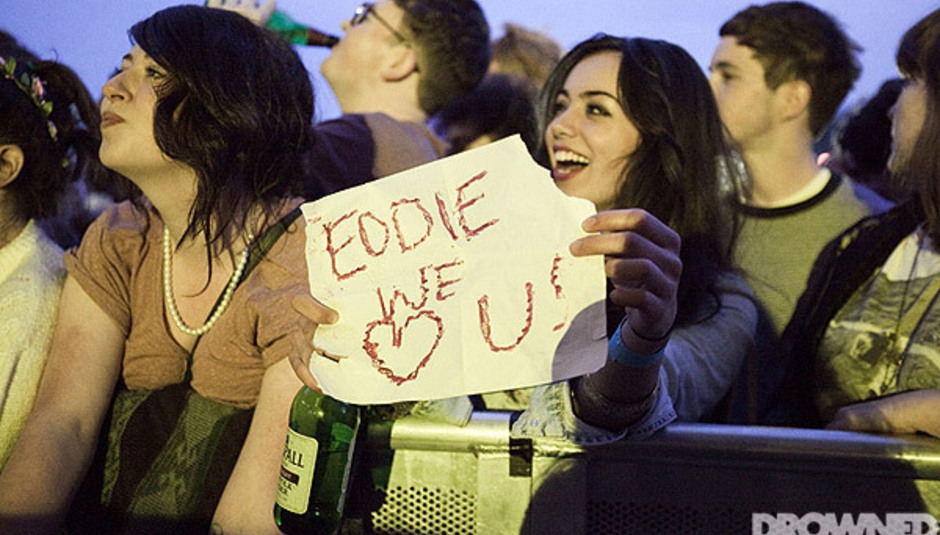 Like one of those comics where Superman and Batman team up, DiS's Luke Slater and Andrzej Lukowski joined forces to go and appraise a musical festival a short tube journey from their homes. This is their story.

This correspondent’s weekend began with that funnest of activities: a standoff with security. In a nice bit of logistical silliness, the Offset organisers were determined to keep one half of the camping area empty for as long as physically possible, and they’d despatched one downcast security guard to ensure that this remained the case. Alas, an hour after we were told it would open, we all just wandered past him and the poor chap looked a bit crestfallen until he cheered himself up by confiscating a barbecue. Which may sound like an indulgent anecdote – I wasn’t even camping, I'll have you know – but it does illustrate one of the more charming things about Offset, namely that there's fuck all security.

Consequently there was an awful lot of enjoyably unsafe climbing of rafters over at the hardcore stage, while the drummer from Bo Ningen very nearly upstaged the fluid guitar heroics of his band’s set by a precipitous clamber over the stage roof. Combined with the very laid back approach to timings – the main stage was delayed for an hour so Caribou could find a keyboard or something – and you have slightly ramshackle vibe that at least slightly belied the fact that that this was essentially the hipster population of East London taking a holiday to another bit of East London.

The main stage sound was pretty rough, mind, which didn’t matter too much, given the mostly scuzzy musical menu, but did rather shaft Caribou’s (and render all that faffing a bit pointless). Still, some people had been guzzling narcotics for two days straight in an effort to psyche them up for Mr Snaith, and the Swim-tastic set still went down a storm. Lurch back a day and Factory Floor more or less live up to the hype, those roars of molten noise that have everyone so hot under the collar being only a single element of a nervily thrilling sound largely based around icily euphoric washes of electronica. Liquid Liquid are old, and haven’t had a record out this year (or any of the last 25 years) and hence probably don't get the warmest reception of their lives from what is, in essence, a field of teenagers. That said, they look thoroughly delighted, while there are probably as-yet-unborn human beings familiar with the bassline to ‘Cavern’. Thrilling, timeless stuff, even if there’s something slightly bathetic about Mystery Jets headlining above them. Fortunately we slink off to Rolo Tomassi who are excellent – I’ve not seen them post the release of Cosmology, but they seem fizzier, more fun and more keyboardy than on previous encounters.

Skipping back to Sunday for a couple of last highlights: Cluster take a while to set up (during which time the DJ, amusingly, drops Kraftwerk's ‘Computer Love’) and have some sound problems, but once their motorik gets into its fidgety flow it’s just peachy, a dreamy drift through fluffy ambience and thunderous dissonance. Finally pretty much the only band I saw that I wasn’t already familiar with was Teeth of the Sea whose manic enthusiasm and brassy, organic runs of warm post-rock quite bowl me over. There is probably some moral in there about checking out new bands, but y’know... shrugs. (AL)

Let me be honest, and also add to Andrzej's comments about general security at Offset, last year it was a bit of a bitch - this year, not so much. I wouldn't go so far as to say it was lax but in 2009 I couldn't even take a bottle of water in because the seal was broken, this year I could have comfortably walked in sipping from several bottles of Prosecco. Well, not quite, but this made for a much more pleasant arrival onto the site, as did the fact that it wasn't raining and the general weather was quite decent for the first weekend in September.

My struggle to try and catch my fellow Bedfordians Ice, Sea, Dead People! had unspectacularly failed, as the first band I managed to sit down and see was Cold In Berlin. They hardly entertained but were sufficiently interesting and “dark” enough to elicit a chin stroke and potential for further investigation. That has yet to happen, in fairness. They played at that time of day where people are far happier to sit on the ground than do a thing standing up, so any kind of real movement unfortunately doesn't happen.

Having met – but not actually seen or heard – Invasion a few weeks back I was told that they all look how they play their instruments. This turned out to be completely true, with their "fusion" of metallic riffs, shit-beating drums and high-range female vocals providing a wake-up call at 3.30 in the afternoon. I was going to comment on how the singer was massively reminiscent of the now-forgotten Do Me Bad Things but have since found out that it is indeed the very same person. Still, good to hear she's belting them out as ever.

The Sunday line-up may have been the superior on paper, but I'd imagine your interpretation of such depends on a few factors, as the Hardcore Stage was tip-top throughout, perhaps even more so on Day One than Two, if you can stomach That Sort Of Thing in more than 30-minute blasts. Last year I saw Male Bonding play the Loud and Quiet stage and it evolved into quite the stage invasion plus singalong contest. This year with the hulking purple main stage there was little chance of a repeat performance. That said, Male Bonding are Male Bonding (and almost always enjoyable) and not much changes from time to time, as the often indecipherable vocals rise and fall over the ever-present screechy six-string and resonant drums. A few dance, though most content to nod their head in approval.

Taking a detour around the various tents, one of the unexpected and most bizarre §ights is The House of §chtinter, which consisted of a man in an all-over white body-suit playing a singular drone along with a similarly droney vocal - all behind a box of some sort. Perplexing, but §imeltanously intriguing. Art Brut once more deliver with what they always do - energy and humour. Their live performances are essentially being the cult of personality in band form, with Eddie Argos the obvious focal point and 'Modern Art' the improvised (perhaps) highlight. It would be nice if he could button up his shirt properly, though.

Skipping forward to Sunday's events and with it perhaps a smidgen more anticipation with what was to come, certainly early on. There can be few bands as good to see as Pulled Apart By Horses – as their support slot for Muse would seem to confirm – but along with that comes the fear that you could get clobbered at any point. That doesn't quite happen this afternoon but it is a thrill as a rocket of saliva flies before my very own eyes. A devestating live show, as usual. Seriously, see these guys if you ever get the chance.

Elsewhere, Connan (of Connan Mockasin) is looking more and more like Andy Warhol and These New Puritans completely fail to live up to anything approaching the grandiose orchestrations and ambitions on their record, which makes me more than a little bit sad. What helps alleviate that disappointment and sadness is the chance to see Eighties Matchbox B-line Disaster, only around eight or so years after I became obsessed with them for approximately a fortnight. Speaking of nights, pyjama-clad lead-singer Guy McKnight has a very much on-off relationship with his microphone. Technical difficulties set to one side, to hear them rattle through much of their first album ('Celebrate Your Mother', 'Psychosis Safari' et. al) put alongside the newer stuff was a delight, as much to my present-self as my 18-year-old incarnation.

The hardcore tent once again overwhelms with utterly brilliant sound – as alluded to above, the only stage where the sound was at any point below par – although I'm not sure my audiophilic tendencies outweigh the need to see Devil Sold His Soul for more than 20 minutes, fun, energetic and loud though it unquestionably was. Caribou was the planned climax to my personal Offset 2010 and with the main stage running an hour late it did work out that way, thankfully. The close manner in which they stand is so cosy you feel that they're likely to high-five at the end of each song. Unfortunately they don't indulge in such mateship, but 'Sun' does not stop these feet from moving among the discarded beer bottles and paper plates. Grin-inducing times. (LS).