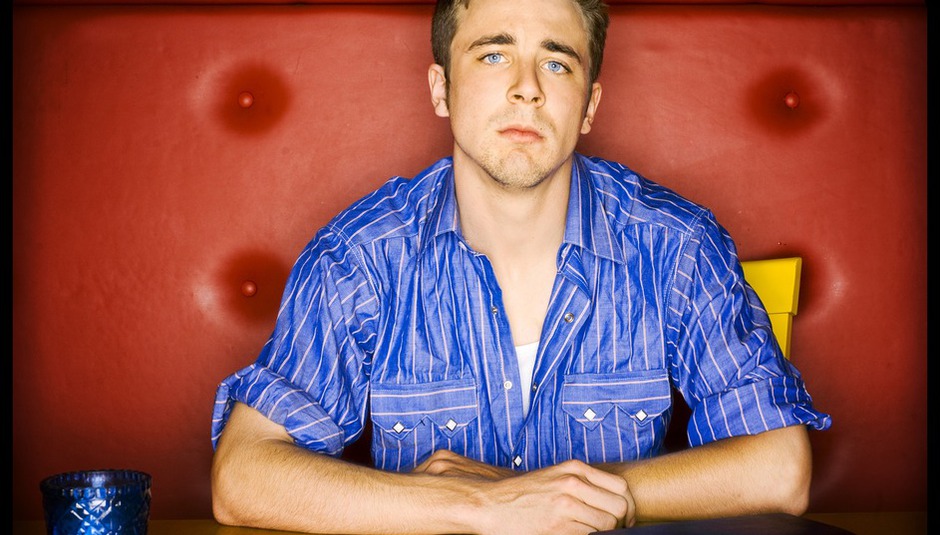 From the outside, Chicago singer-songwriter Joe Pug looks pretty much like your traditional man-and-a-guitar: beat-up acoustic, check; gruffly vitriolic voice, check; jeans and shirt, check. But having already clocked up shows with Josh Ritter, Steve Earle, Elvis Costello and Levon Helm, this 25-year-old is anything but ordinary – and his steady rise over in the US is down to two things; his rapport with fans (to date, Joe has personally mailed more than 20,000 free sampler CDs to fans in 19 countries and every US state), and, most importantly, his songs. Rough tales of unjust wars and rampant consumerism (Nation of Heat), internalised loneliness (Unsophisticated Heart) and the thrill of leaving everything behind (Hymn #101) – all sung in his tar-thick, sore-throated roar – have set his two EPs and debut album, Messenger, apart from the troubadour hordes.

Joe’s in the UK for a few dates – both solo and supporting Horse Feathers – this next couple of weeks. We swapped emails before he flew the Atlantic.

DiS: The story goes that you quit your playwriting course at the University of North Carolina the day before your senior year began, drove to Chicago and picked up a guitar. As romantic as that sounds, that must have been a pretty tough time. How did it feel to start all over again?

Joe Pug: Now that my songs have received a small degree of public validation, it’s easy to look back and romanticise those years. But at the time I was just a 21-year-old kid without a college degree, playing open mics and replacing drywall for 10 bucks an hour. Absolutely, it was frightening. When my friends were walking across the stage in their caps and gowns, I was renting a room in a glorified tenement that looked like the house in Fight Club.

I can identify with the urge to just quit everything and start again – sometimes I get really frustrated that all I know is academia, and that I can’t do anything with my actual hands; I don’t possess a single craft or manual skill that I really know inside out. So the whole story of you leaving your studies and turning carpenter – well, that holds a kind of fascination for me. Why do you think you were unhappy at college? What was it not giving you?

I suppose the stakes weren’t high enough. It seemed no matter what my peers or I wrote, it was constantly praised. In academic settings, there is often an attitude that simply because a work of art exists it has some inalienable value. Writers were able to cloak uninspired, flaccid work in that easy mantle – myself included. Just once, I wanted someone to say, 'This work is simply poor'. Eventually I learned that frank criticism only comes from within; that self-flagellation is a writer’s 'voice'. So I left to find a place where I could beat myself up in peace, where no one could tell me I was doing fine.

Why did Chicago seem like the place to go?

Chicago is a world-class city that an artist can afford to live in. Sadly, there aren’t enough of those in this world.

Do you still write any drama or sketches or anything, or does whatever you want to express morph into lyrics these days?

Sometimes I wish I were a more prolific artist… writing songs in the morning, painting in the afternoon, polishing ingenious dialogue in the basement at night. But it takes everything I have to do just one thing right. And even now, only writing songs, I often feel overwhelmed and inadequate. If you take the time to consider the limitless scope of just one song – all that it could be – the task of faithfully creating it is massive. Simply put, it’s a full-time job.

Do you feel more 'at home' travelling around, having no fixed address – or do you miss feeling like you have a place to settle?

I miss home constantly. Travelling is something I do to share the songs I love with their rightful audience. The gas station coffee, the roadside motels, the boredom – they’re occupational hazards. It’s more Ray Kroc than Jack Kerouac. I’m not an 'art for art’s sake' kind of guy. I believe that a work achieves its meaning through its beholder. A lyric sheet that sits in my desk drawer or a melody that only rattles around my bedroom is, to me, incomplete. So I tour ceaselessly to find that communion between the songs and the listeners who bestow their value.

A lot of your lyrics describe or at least imagine a very rugged, free, almost old-time, pre-21st century technology America; and idealise the life of the outlaw, the traveller. Of what you’ve seen of it, does that picture of America still exist?

Tell us a little bit about your childhood and growing up – we know the basics of the story of Joe Pug from five years back, but we don’t know much about you from before then...

I had, and still have, an extremely close relationship with my family. When I was younger, I almost wished for a broken home. Many of the artists I admired, chiefly Kurt Cobain, came from dysfunctional backgrounds. I longed for a great, star-crossed burden to forge that sad greatness. My childhood was far from the narrative of a beautifully doomed artist. I never had to question the affection of my family or those around me. And that made me feel like an imposter. By and by, I realised that the idea of an artist as a damaged soul is a convention. It’s a well-worn trope. So maybe my normalcy makes me an outsider, maybe my happiness is radical.

In the beginning, word got out about you because you dished out free CD samplers to people who came to your shows and anyone who asked for them, and they then passed those on to their friends, and to friends of friends... and you still do that today. What kind of community has this created around you?

Having discovered the songs on their own, people feel an intense ownership of my music. They take pride in introducing their friends to it. Their friends, in turn, do the same. No one feels like they’re being duped into buying into something.

Do you feel like there aren’t enough musicians doing that kind of thing – interacting with the people who help earn them a living, building up a sense of them being part of something? Or are you actually finding the opposite: that, these days, more and more musicians are willing to go to greater lengths to get to know their fans and work with them, because, in a world where it’s so easy to stay separated and distant from other people, it’s never been so crucial to stick together...?

Interacting directly with fans is walking a tightrope between offering an interesting context to your music and unadorned narcissism. For example, having a beer with fans after a show and discussing the finer points of Elliott Smith or sending out a Twitter about a new guitar you’ll be touring with, those interactions seem genuine. They deepen the understanding of the music and where it came from. But do people really need to see pictures of their favourite guitar player eating breakfast on the road? Do they really need to hear the particulars of his latest doctor’s appointment? Do they really want to know that the songwriter they revere spent the last weekend reading the sports section and drinking gin? At a certain point it goes from an artist revealing insight into their process to a lonely person desperately seeking recognition for the same pedestrian bullshit we all deal with on a daily basis.