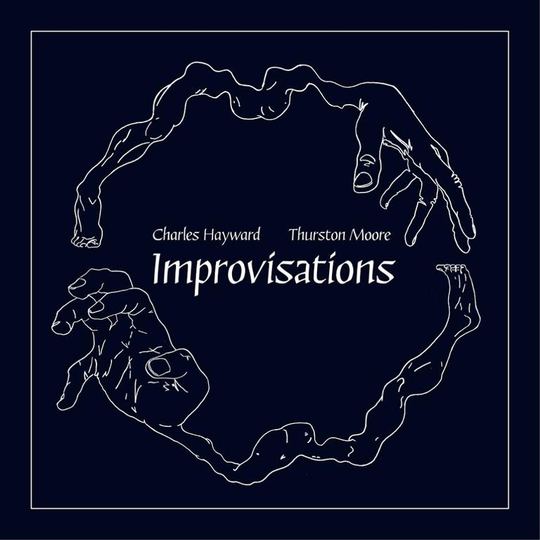 'Composing will always be a memory of inspiration; improvising is live inspiration, something happening at that very moment. Do not fear mistakes. There are none.'

When he spoke those wise words several moons ago, Miles Davis wasn’t yanking your or anyone else’s chain. After all, placing it at the heart of many of his modal and melodic sprees over a remarkable five-decade career, Davis knew a thing or two about the nebulous realm in question; of what exactly it meant to just feel, and to play, and see how all the notes fell. While few musicians openly run with that faith in leaping into the unknown, much fewer come close to mastering that leap.

Though from ostensibly disparate worlds to Davis, Thurston Moore and This Heat’s Charles Hayward have similarly long embodied that same penchant for opting for “live inspiration” as a means of creation. Having met up in London's Lynchmob Studio earlier this year, the pair hit record and spent the afternoon improvising. With Moore on his beloved Jazzmaster and Hayward commanding the drums, the result is Improvisations, a record divvied into seven untitled tracks, with each standalone jam simply identifiable by side and chronological order.

Unravelling via a quintessential Thurston Moore summoning, all tremolo-arm flourish and spectral chimes, 'A1' is an instant peak here. Navigating a blitz of contorted sludge via Moore’s vast array of extended techniques and Hayward’s Lightning Bolt-esque implosions, it’s an opening gambit that distils the overarching essence of Improvisations as a volatile, masterfully minimalist release. While the much shorter pummel of 'A2' impresses and the fuzzed-out doom-jazz of 'A3' captures some of Hayward's finest forays, 'B1' - the longest track here at 11 minutes - is an outright highlight. Though marked throughout, the nigh on telepathic connection between between the pair here is pronounced. Simmering out with a piercing squall of feedback, it melds tumbling, first-rate drum patterns synchronised noise grooves and a spree of natural harmonics courtesy of Moore.

Much like Sonic Youth's feature-length instrumental masterstrokes Made In USA and Spinhead Sessions, Improvisations is a record that will likely reward the attentive mind most. Paying conscious heed here will many dividends: though Moore and Hayward’s endlessly changeable collisions stem from some unknowable realm, their various epiphanic freak-outs and short-lived moments of pure ingenuity here will bypass the distracted ear. As such, first experiencing it via a physical copy of the limited-issue release (500, since you ask) is recommended.

In a YouTube clip featuring the pair abruptly finishing what is presented here as 'B3', Moore smiles and says 'pretty good'. Of course, he’s downplaying it a little. If the surest sign of a strong record is that it possesses the strange power to induce you to reach for it, time and time again, Improvisations is likely to tick that box for man. While, in Mile Davis’ nomenclature, Moore and Hayward’s are more than capable in the realm of 'memory of inspiration', this document of their joint - and, it seems, endlessly compatible - aptitude in live inspiration is a real conquest.