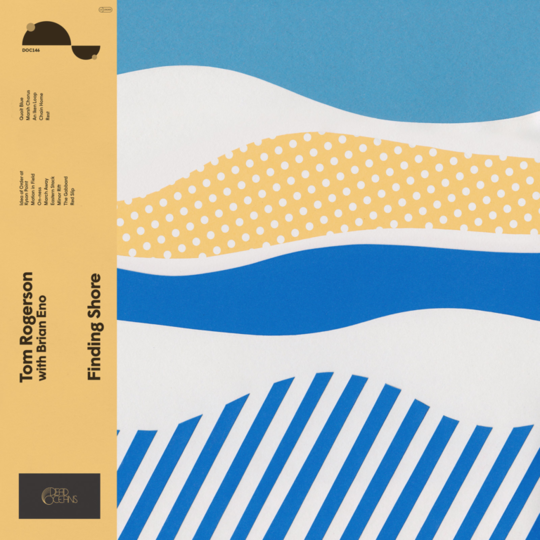 The arrival of Finding Shore, a collaboration between Tom Rogerson and ambient legend Brian Eno, may come as something of a surprise to fans of Rogerson’s previous musical exploits in the awesome prog/math rock/electronic/etc trio Three Trapped Tigers. As part of that group, Rogerson helps build a sound that is somewhere in the vicinity of Autechre’s Tri Repetae as played live on bass, keys, and drums by a collective of hyperactive jazz musicians getting their revenge for a decade spent imprisoned on a cruise liner playing lounge classics for the assembled guests.

Finding Shore operates in a completely different musical environment, Rogerson and Eno (who met outside the toilets after a gig) using only the sounds of piano (sometimes played straight and sometimes manipulated to create electronic-leaning soundscapes) to create a record straight out of the early Eno ambient series playbook. Opening piece ‘Idea of Order at Kyson Point’ is genuinely gorgeous, with layers of ambience gradually unfolding to allow a stunningly beautiful piano line to take centre stage. ‘Motion in Field’, appropriately enough, has a rather more kinetic sensibility, Eno’s manipulated keys surrounding Rogerson’s melodies with gentle chatter, allowing the piece to buzz gently as it builds.

The problem with Finding Shore is that – for all its moments of genuine beauty – the record never quite feels substantial enough. In that sense, this is a pretty album, but one that lacks a certain amount of compositional weight. Compared to tonally similar work by David Moore (Bing & Ruth), or perhaps continuous music mastermind Lubomyr Melnyk, for example, Finding Shore too often leaves itself open to being accused of lacking a certain richness of palate. In this sense, the decision to create the entire record via the medium of the piano has its minor drawbacks, and prevents the record pushing anywhere particularly new after its opening exchanges.

That isn’t to say that Finding Shore is anything but an enjoyable, meditative listen. In fact, this record could be accused of flying by… albeit in a similar fashion to countryside view from the window of a speeding cross-country train. It has an air of transience that could be said to make it less than the sum of its parts. Then again, it’s hard to be too critical of that when some of the record’s most jaw-droppingly gorgeous moments arrive, not least the closing triumvirate of ‘An Iken Loop’, ‘Chain Home’, and ‘Rest’. It is in this record’s opening salvo and in its closing stages that its aim, of reflecting the natural beauty of eastern England, where both Rogerson and Eno grew up, comes closest to being accomplished.