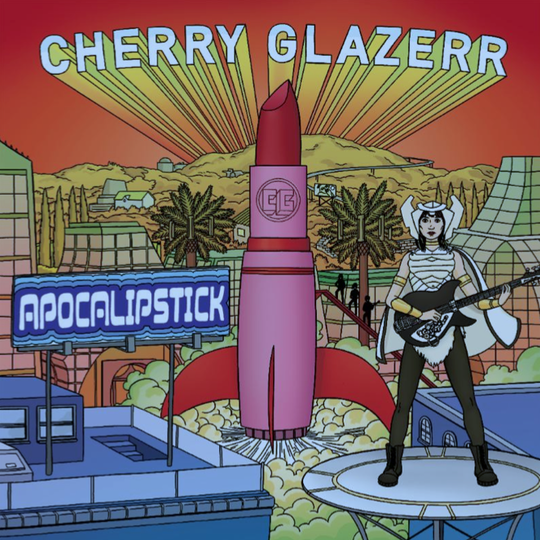 The phrase 'rock star' is fading into anachronism, innit? Used to be, bands with guitars weren’t just big – they were legends, kaleidoscopes of impossible colours, leaders of destinies. Not everyone who plays in a stadium to millions of viewers qualifies as a star that rocks. (Anyone who tuned in to last year’s Superbowl could tell ya that – my favourite gag on Twitter was 'How nice of Beyoncé and Bruno to bring their Über driver on stage!')

Cherry Glazerr, though, must be the real deal. I’ll fight anyone that doesn’t agree. Right now! Come on, get down here. I don’t care if you’re one foot taller and 100 pounds heavier – it’s a dumb idea, and you’ll likely stomp my face in and toss me over the ropes, but I’d do it anyway for the glory and the rush. That’s Apocalipstick in a nutshell: a series of gut instincts, bloody rumbles, and quick thrills, exploded into ruby red projection screens for all the world to see.

I’d attempt to describe what I’m hearing here, but I fear I might just devolve into comic book sound effects: 'Told You I’d Be With The Guys' opens with a BIFF BAM POW! 'Trash People' sneaks up from behind with a WHOOSH! 'Lucid Dreams' swings in with a THUD THUD WHAM! It’s impossible not to, what with the gigantic lurching riffs and Clem Creevy’s righteous vocals. I mean, if RIYLs are more yr bag, I’d say Sleater-Kinney, and probably Tijuana Panthers, and certainly the Pixies, but – where’s the fun in listing names? Where’s the action?! Whenever I’m at 'Sip O’ Poison' in the car, I’m transported into a mad chase scene, where I’m the pursuer and the target is just behind the three slothful trucks in my way.

Now, like many rising rock stars in the modern era, Cherry Glazerr don’t rock from pedestals above their fawning fans. Creevy says it best during the wonky grunge part of 'Trash People': “Art is love and love is sloppy / nothing is all pure, nothing is all dirty”. Well, and also “we wear our underpants three days in a row”. These 'trash people', after all, aren’t real degenerates, just the weirdos that don’t slot into the neat and tidy boxes prescribed for grown-ups with proper grown-up jobs. (Hello, me!) The tidal wave surf of “Humble Pro” is nothing more than a riot in a kitchen – and if you’ve ever lived in a household with a buncha roommates, you know that all good times start in the kitchen.

Not to mention, there’s 'Told You…', which – apart from blasting the doors of Apocalipstick clean off their hinges - could tell the story of yr life. “I WAS A LONE WOLF!” yells Creevy; then, with a resentful howl, adds “Where are my ladies? / I guess that was my fault.” As a life-long tomboy, I know exactly what she’s talking about. When you reject the feminine, you push away from other girls; so when you evolve into an adult that embraces feminism, you find yourself in a dispositional rut, crippled by your own non-girl pride. No one has so succinctly (and wickedly) fessed up to this like Cherry Glazerr – and for that, I wish I could high-five them all.

Honestly, can we just get some skin here? Even the slowest number on Apocalipstick, the topsy-turvy waltz of 'Nuclear Bomb', simmers with battered glee, like grimy grey bathwater fizzling with soap bubbles and steam. Like the best rock stars, Cherry Glazerr stand for the masses – not just the dirty and unloved, but for anyone tired of musicians flaunting hip fashions and parroting obscure philosophies that barely apply to their own art. For those who want to just order in pizza when your friends come over, or those whose wardrobes consist mainly of band t-shirts, or those just want to feel the noise – y’all come hang with Cherry Glazerr.