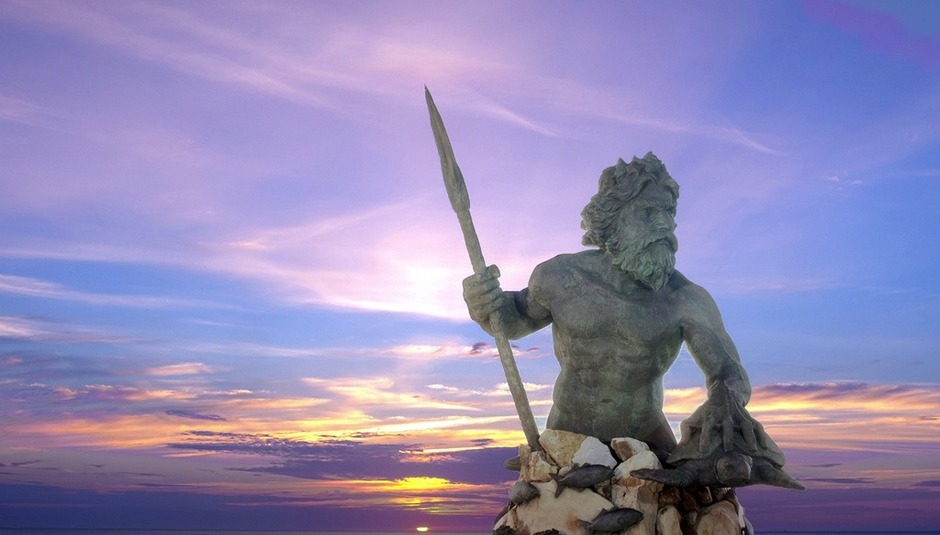 The Neptune is back! 12 Great British Albums! New Judges! Streams! And more!

The Neptune album prize started as a reaction but has become an annual 'thing'. At first it was a response to the annual Mercury Music Prize overlooking some of our countries finest acts (in our opinion, etc, etc) right at the moment when it seemed like they were on the verge of a breakthrough. As an award originally setup to help left of centre treasures gain wider recognition, there's been a certain pang of 'WTF' to the Mercury over the years for including artists who have already sold bucketloads... then again, perhaps the years when the likes of Bowie, Plan B and M People featured, were the years when the British Public have been more engaged in the award, but you could easily also argue the opposite. People love to argue.

We can't remember whether it was the exclusion of Foals or Wild Beasts or Fuck Buttons or someone beloved of our readers and writers alike, but we thought 'screw it, let's have our own list!' So we did. It started out as the Pluto prize, but we decided after the first few years to call it The Neptune, instead. Because it's to do with the god of the sea, rather than associations with a cartoon dog...

Over the years, the acts we love have had Mercury nods (Wild Beasts, Bat for Lashes, Burial, Villagers, Field Music, etc; Jon Hopkins and Foals last year; and Youth Fathers this year), but there have still been raised eye brows when the list is revealed and we glance at our predictions. 'Does this list represent the finest British music of our generation?' That's usually the sort of question we find ourselves asking at DiS HQ. This has led to this Neptune list continuing to exist.

Previous Neptune winners have included the likes of Hookworms, SBTRKT and Late of the Pier (come back guys, we miss you!). This year's list was harder than ever to whittle down to just twelve records, as there have been so many contenders. We listened to all of your longlist suggestions (also on Facebook here and compiled a massive Spotify playlist of all of your suggestions. It was really interesting compiling that longlist and discovering so many great records that have barely had any media attention, and whilst we got lost in the throes of a crisis about whether we should be doing even more to champion overlooked British acts (WE DO TRY OUR BEST) (but then, we also do try to focus your limited time and attention on the very best... and the battle for your attention can be a big challenge, but let's not get into the pointlessness of everything, this ain't the time nor the place). What I'm trying to say is, beyond these 12 records is a playlist full of things to discover, but when it came down to it, these were the 12 we love the most.

THE NEPTUNE ALBUM PRIZE 2014 - The Nominees

The electronic community pretty much assumed this record would be nominated this year. A lot of our favourite musicians predicted that it wouldn't just make the list, but it would win when they spoke to Gigwise.

"...nominal piano instrumentation and flitters of electronics – both used to punctuate the melancholic lyrics and vocals which take centre stage... throughout the album, Dare resembles a stripped down, classically leaning James Blake – relishing in minimalism and with a penchant for beautifully written phrases." Read Sam Willis' full review

"Throughout its ten pieces, Eagulls delivers in every conceivable way. Opening proceedings with that single ('Nerve Endings'), the standard is set from the album's opening bars. 'Hollow Visions' and 'Yellow Eyes' follow suit in rip-roaring fashion, the former's scattergun assault clearing the way for the latter's cautionary build up that evolves into a widescreen cavalcade of effects laden guitars not that dissimilar to the one punctuating The Horrors' last two records. "I can't see it, can't feel it, can't her it..." cries Mitchell in life dependant fashion. Which sums up Eagulls to a large degree in that everything they do and say is believable. Which in turn gives us, the listeners, something worth believing in." Read Dom Gourlay's 9/10 review

This not-quite-ambient not-quite-drone not-really-classed-as-modern-classical record by a chap from Liverpool has had a lot of love from our forum members. It's gorgeous. Dive in:

How To Stop Your Brain In An Accident

"This is (arguably) the band's finest hour. Freed from label interference and buoyed by public support, the four let rip as if it's their first - or indeed last - ever record. Falco has never sounded better; his vocals are varied in delivery, range and content. The comedic edge to the words that so few bands ever find a way of passing off are more subtle than ever yet even more smile-inducing; the Stewart Lee if you will to his peers' Comedy Roadshow attempts. The amount of personality he injects throughout is a masterclass in frontmanship; there are obvious examples such as his gravely faux-country delivery of the album closer and the public announcement styling of 'Singing on the Bonesaws', but it's the little touches that get better with subsequent listens - the way his natural voice echoes certain lines within the aforementioned to lend extra clout, the tightening up and growling on the opener to add drama, his delayed delivery of lines within (the quite fabulous singalong) 'Donny on the Decks' for humorous benefit, the more melodic harmony that unveils itself on 'The Male Gaze'. It's all incredibly succinct too; no word is wasted, no topic over-laboured." Read Sean Thomas' review

Ducking away from any of those melancholic singer-songwriter cliches - perhaps to side-step being ​pigeonholed by lazy journalists - Keaton Henson went and made a heartbreakingly beautiful classical album, which he Beyonce-d onto the web on the day of release. Preceding the release announcement, he shared his favourite pieces of classical music with DiS.

"The first La Roux album in five years embraces a playful electro-calypso theme in a vice-like grip. Trouble In Paradise isn't all that concerned with making some grandiose comeback statement - though the storming, Duran Duran-esque 'Uptight Downtown' takes care of that early doors - not when there's so much shimmer to play with. It's a bold move; emerging from hiatus in relatively nonchalant fashion. In many respects, this is the most important step of Jackson's career. La Roux sold millions and bagged a Grammy, neither of which were in the script." Read Dave Hanratty's full review

"Their twelfth record follows less than a year after their eleventh, the introspective, downbeat Rewind the Film and is everything that album wasn’t. Where the former was a mostly acoustic inward sigh, focused on, as Wire puts it, “midlife, staring in the mirror, RS Thomas, myself and my country... it’s all over”, its successor compliments it in opposition: electronic, punkish, and outward facing, it sees its creators inspired not by their own shortcomings and fears, nor largely by their anger, but by creativity, energy and movement for their own sake, a “celebration of ideas” according to Wire. It’s an album steeped in Art and affirmation. While Rewind The Film was a strong record, it’s also one that made sense from a forty-something Manics, lost in sepia and faded melancholy. Futurology is all primary colours and speed and few of us saw it coming." Read Marc Burrows interview with Nicky Wire

"Rave Tapes is possibly Mogwai’s strongest collection - Les Revenants notwithstanding - since Mr Beast, and an extremely solid distillation of their enduring appeal. 'Hexon Bogon' snarls with characteristic sociopathy, all pealing riffs and squalls of distortion, whilst 'Deesh' does epic and grandiose, Martin Bulloch’s drums pounding militaristically behind like the accompaniment to slow-motion propaganda, all sweat and vigour and desperate final push. 'No Medicine for Regret' does pathos as only Mogwai really do, driving melancholic piano through a maelstrom of reverb and distortion, a calm within the storm, whilst 'Repelish' returns the band’s idiosyncratic humour, welding interview audio from a guy troubled by Led Zeppelin’s backward-masked Satanic messages to a magnificent assemblage of bubbling electronica and sliding, interweaving riffs - marrying the most accessible track on here to the vocal 'You’ve Got to Live for Satan'." Read Christian Cottingham's review

"It’s a record without a weak link, that doesn’t outstay its welcome, and excites you about the possibility of seeing it all played live. It’s also confirmation that The Phantom Band can continue to bring their disparate styles together to create something really exciting. At heart they’re a rock band who bring other distinct styles into the mix rather than anything truly groundbreaking or genre-melting, but when it’s done with such skill, such confidence and precision, it really doesn’t matter how it’s labeled." Read Aaron Lavery's review.

"Present Tense might lack the immediacy of both Smother and Two Dancers, but scratch away at the surface and its a record oozing with the precision and maturity we've come to expect from its creators. And in all honesty, it would be churlish to ask for anything more." Read Dom Gourlay's review

"The xx may be the closest point of musical comparison, but The National and Antlers have that same knack of stabbing unease. Where a record sticks with you for longer than it ought to.... Woman’s Hour are a real joy to behold. To have held back from the hype machine and pursued their own vision of success is admirable. To have achieved this at the first time of asking, that’s damned well remarkable." Read Robert Leedham's review

Over the coming weeks DiS' team of judges will listen and re-listen to each of these records, and in October we will reveal who has "won". The winning act will join DiS for their prize, which is a fish & chip dinner at their earliest convenience. In the meantime, we will be catching up with several of the nominees for a chat and be sharing more thoughts on each of the nominated records. Be sure to join our mailing list to find out who wins, and to get monthly music recommendations from us:

Who are the judges?

Who do you think will win?

Join the conversation over on our Music Forum.

Is this the grossest music vid of all-time? Eagulls 'Hollow Visions'