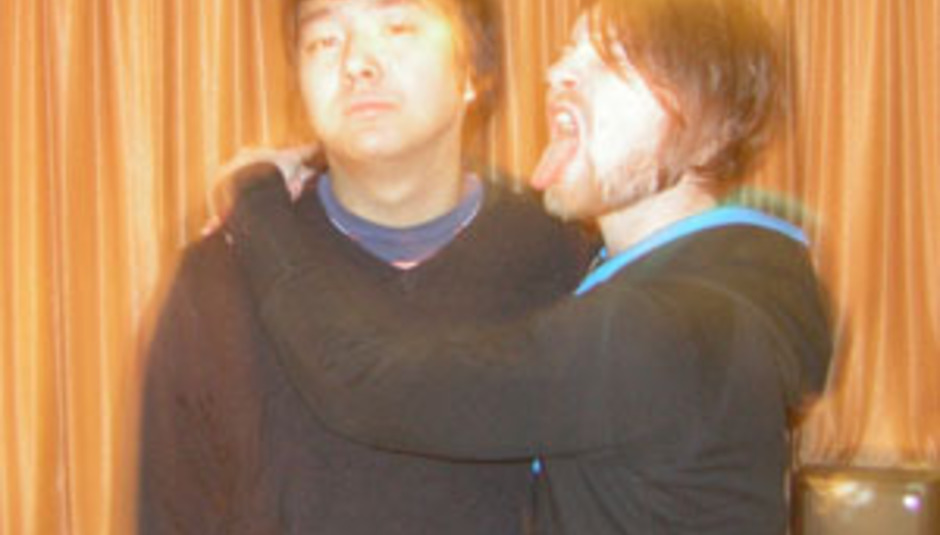 Sometimes, a band makes such a joyful noise – such a euphoric, huge, perfect sound – that they can not only change your mood, but inform your entire world view whilst doing so. You know the feeling: when your body fills with adrenalin and a huge smile spreads over your face, you sway and rock and move almost involuntarily, and all the underlying ideas in the music click perfectly into place, and you understand, and your brain suddenly feels on fire with wild inspiration, excitement and ideas.

* Some of your songs have names that allude to quite magical, sweeping or metaphysical ideas... ghosts, spirit, love, planets, oceans. Is this kind of palette of imagery connected to what your music is kind of about?*

Ben Button: Yes, definitely. I like that idea that the Earth is somehow channelling itself through Fuck Buttons’ music. If you get me...

That's a very pretty idea, like a tiny vessel riding a giant wave. Would you go so far as to describe it as religious?

Ben: Hmm. I was just gonna say I think it could be seen as that.

Andy: If religion can be described as an immersed act of hope, then yes. We're not about wars though.

Andy: A good thing someone said to us once was, "It's like lying in a pool of blood and bones and skulls, but looking up at a clear blue sky". I'm going to stop with the cod G-isms, though...

It's funny you say the same things at exactly the same time... you two seem to read each other during performances, signalling to each other and kind of improvising to an extent, or at least playing very instinctively...

Andy: We've played a lot now and we know each other well. We get on really good – it’s an amazing partnership, it really is. I've seen so many bands now and how they interact and that's shown to a great degree how well we work together.

Ben: There's no improvisation, just we decide when the crowd are ready for the next hit and signal to each other. Then WHAMMO. [laughs]

Okay. Let me note that... signal... then whammo... Your gigs are often intense and immersive... you said that your Oxford gig was possibly the best you've ever done... what made it stand out for you?

Andy: Well, we had this new song that had all this potential to it. The first song we've made which has had a part without distortion. But it needed to get tweaked and tweaked a bit more...

Ben: That was the first time we'd played it once it was in its final stages and it sounded glorious.

Andy: All those shows that that track was getting tweaked, I was like, "Ah man, this show sucks", even though it didn't. It was just that I couldn't get into it because of the new track and how I wanted it to be really good. But that Oxford gig: the track was finished and the show was amazing! Jimmy, the sound man at The Cellar, did an amazing job, and yeah I'd say it was the best show we've done so far. There are photos of me looking like a nutcase from the enjoyment.

Ben: Yeah there are some really great photos of Andy when we played the newest song in oxford. I've never seen a photo of someone so filled with sheer joy.

Yeah I've noticed that there's a kind of personal investment from both of you, that you're very connected to the sounds you're making, and the ideas behind it. And also to each other and, I guess, to the audience too.

Andy: That is a big thing for us yeah.

** Have any of your gigs turned into anything more participatory?**

Andy: A few have. They weren't completely unpleasurable, but I'd still prefer to be in control of what the sound is doing. Like the drone bit of our set, where there's a huge drone with a subtle line of melody running through it, in Reading one of the guys was hitting the floor tom and really that bit should just be drone...

I guess the inclusiveness and euphoria of it all kind of invited that, in a way. The table right in front of you, full of all that colourful stuff, with Andy's case like he's just Kerouac-ed his way to the venue on the a flatbed train...

Andy: Yeah, it does sound contrary, me saying I don't like people contributing to the sound, yet we set up in the crowd. But I guess we do that to kind of democratize the space. But not the sound. We're sound fascists.

Ben: Just for the record, we set up in the crowd so we can all be together. Not so you can play with our toys.

Actually, speaking of Kerouac and America, I hear Pitchfork have covered your demos, and that you're going over there to do some live dates? Are you going on a proper road trip? That's pretty exciting.

Ben: I think we'll be totally well received over there. Pitchfork really helped out there...

Apparently Robbie Williams had trouble, too. If you don't break America you can do interviews saying, "We really empathise with Robbie"...

Andy: Yeah, I feel for that guy. Must be hard being gay and having to pretend you're not.

You've signed to Holy Roar. That's the perfect name for a label you'd be on! How's it going? Plans?

Ben: We're not really putting the record out on Holy Roar anymore. But we really love what they do and are looking forward to playing with some of the bands on the label in the coming months.

Okay... do you have any plans for releases, singles, album?

Ben: Yeah we're gonna be putting out an album this year. Don’t ask us who on yet though cause we're not gonna tell you. [laughs]

Do you know what your mysterious album will sound like? Lots of new stuff, or a lot of the elements from your current live show?"

Andy: It'll be elements of the current live show, and new stuff, too. The new track hasn't been properly recorded yet, so we’re looking forward to that.

Ben: We basically want it to sound how it does live. Immersing and hopeful.

Andy: I want it to be like being wrenched out of one's body for the duration of the record and experiencing what that guy said to me at the Oxford gig, to copulate in gristle and flesh, staring at the clearest blue sky. Beautiful... just beautiful.

_Check out Fuck Buttons on the magic MySpace, here. They have a number of dates lined up with Cutting Pink With Knives, and play Birmingham’s SuperSonic Festival – sponsored by DiS – in July. Check MySpace for more details. _