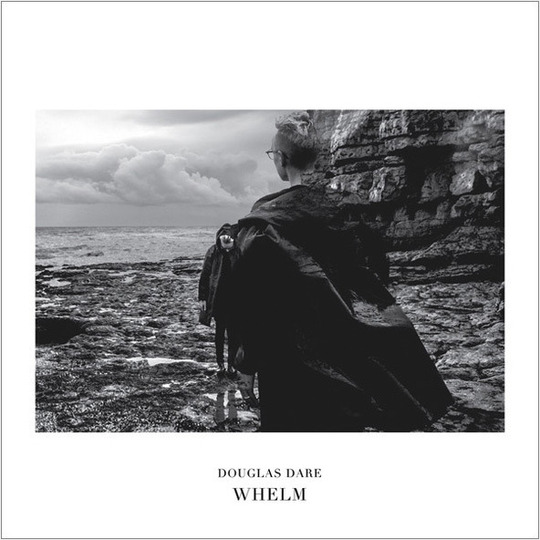 'The words that follow in this book explore; our apparent fascination for time and insatiable need for answers; the insupposable reactions we have to love and loss, empowerment and restriction; and through it all, nature’s unstoppable ruling of everything,' reads the foreword of a poem book entitled Nine Poems by Douglas Dare, which arrives inside the sleeve of the Londoner’s debut LP Whelm. Inside, as you might have guessed, are nine poems, all of which are central to the soul of Dare’s debut effort.

Along with the clean cut and muted cover of the album, the poems suggest a record with minimalistic approaches and songs that orbit around bringing sentience to their lyrics. The clues are there and Dare doesn’t disappoint with an album that offers nominal piano instrumentation and flitters of electronics – both used to punctuate the melancholic lyrics and vocals which take centre stage within the project.

The man himself is a singer-songwriter who has been impressing in a live setting and has managed to translate his lyrically focused musings onto wax with the help of producer/percussionist and fellow alliterative Fabian Prynn. The conception of Whelm to its conclusion took just shy of three months as the duo went from laying tracks at their home studio to recording at Flood’s Assault & Battery studios in west London. The move to the studio accentuates the clarity inherent in the record and allowed the pair to expand sonically on an idea nurtured solely by them from start to finish.

The tracks on Whelm are presented from the point of view of a third party, or inspired by events in history; they all hold in their murmurings grandiose stories and ideas, sung to a backdrop of aching piano. Album opener ‘Clockwork’, a track drawing influence from the Antikythera mechanism – an ancient analogue computer found within the Mediterranean – begins with fragile keyed pianos and subtle electronic punctuations. Within the track, and throughout the album, Dare resembles a stripped down, classically leaning James Blake – relishing in minimalism and with a penchant for beautifully written phrases: “Ruled by hands that point at the moments passed/Lived life behind the glass/Break it to breath at last” sighs Dare on the song.

‘Nile’ illustrates the extreme emotions humans go through as they fall in and out of love; the narrator exhibits a desperation to be loved by an unseen partner, Douglas sings in the refrain: “I’d sail down the river Nile/ Just to keep you alive and well”. ‘Caroline’ also centres on love and loss, where all that remains are “The letters that make up your name”. In ‘Unrest’ some studio time at Assault & Battery added sonic textures, as a Mini Moog toyed with by Dare at the studio is used as inspiration for the bass section, and chopped piano and electronics punctuate. Historic events are explored further with ‘London’s Rose’ and ‘Whitewash’ – the former is a poem written by Douglas about the use of underground stations as bomb shelters in WWII and the later addresses the Magdalene Laundries in Ireland, which would put promiscuous women and prostitutes to forced work during the nineteenth and twentieth centuries. Although some of the themes and content of the music may be a little heavy, Dare uses the most basic of tools available to him and us as humans to express himself – words. Shying away from complicated production and thick textures, Douglas Dare’s debut effort concentrates on foundations of song – the stories that they represent. If you’re looking for excitement then Dare is not your man, but his sung prose and poetry are encompassing if simple things are what matter to you.