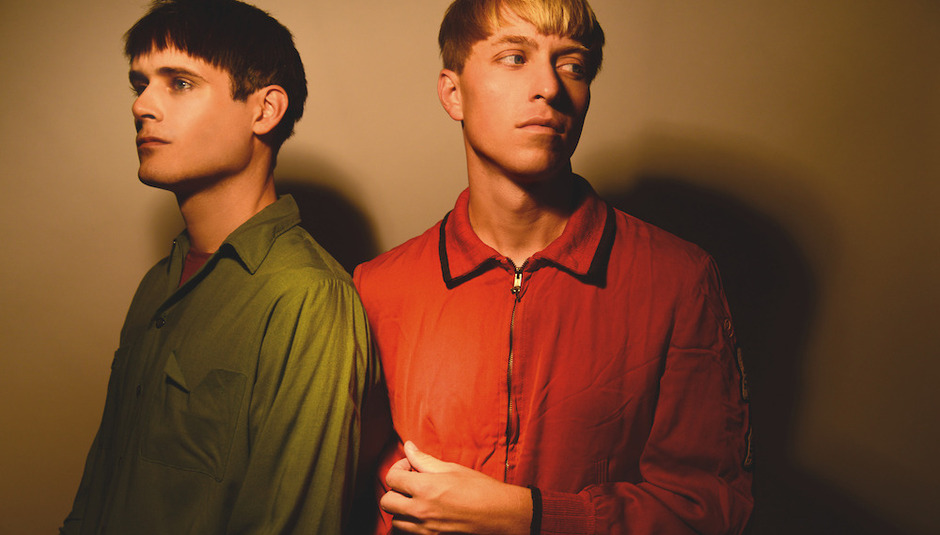 You may remember The Drums as NME darlings circa-2010. They were absolutely everywhere. But - despite 8/10 reviews on DiS - what you might have missed was the fact that they were really rather special. If you hadn't caught wind of this fact, welcome their third record into your life.

Encyclopedia is the sound of exiting a brutal dream. It's a little bit Liars-y, but with some of those swollen moments that Panda Bear does so well. And there are hints of The Cure's elegant dark harmonies and My Bloody Valentine's sea-sickness. It's a wonderful whirl of a record and you can stream it right here.

We asked the band to walk us through the record and here's what they had to say:

This song was birthed out of anger, frustration, loneliness, bitterness, betrayal, all of those lovely feelings that add texture to music and to songs themselves. We sort of embrace these feelings when they happen and hope something great comes from it. The product of frustration can often lead to songs like `Magic Mountain’. When we show this song to people they either think, ‘wow, this is beautiful,’ or ‘I hate this’. But to us this song is delicate, strong and is about comforting the outsider and finding a safe place, which I think we certainly did with this album.

‘I Can’t Pretend’ was the most honest we’d ever been. It’s a song rooted in reality, about cleaning out the Looney Tunes in your life, the nonsense and making way for something pure and true. I don’t think we’ve ever been able to be this honest. Maybe that’s because of the place and time we were in but now that it’s down to just Jacob and I, we’re able to go there. It feels refreshing and empowering. ‘I Can’t Pretend’ was the first song we had written that we put on the album. There was one just before but that’ll never see the light of day. Enjoy ‘I Can’t Pretend’ and get real.

I Hope Time Doesn’t Change Him

‘I Hope Time Doesn’t Change Him’ was the first slower tempo track we made for this record. I think its one of the most delicate and certainly the first time we’ve approached homosexual love in such an honest way. It’s a song about love but it’s also and maybe more so, a song about fear. The fear of losing something good and true. All too often that’s the reality we live in. What a beautiful thing to put to paper or to lay down to tape. I remember Jacob called me and said, “lets make a new record, I want it to sound like The Sound of Music.” And I said, “I want our new album to sound like a garbage can.” So we blended the two styles together. You’ll hear synth arpeggios and synth pads and on top of those glimmering, glistening elements, you’ll hear a guitar that sounds like a dying cow. That’s just how we wanted it.

‘Let Me’ is, to me, the most powerful song on ‘Encyclopedia’. It was a song inspired directly from the gay abuse and humiliation going on in Russia to the Swede boys and girls, who were already given a hard time. I think of Russia in this very romantic sense. I always thought it was beautiful aesthetically. We were just there to kick off our ‘Encyclopedia’ world tour. It really seemed like a timely thing because we were able to bring comfort and connect with those that we feel so much for. ‘Let Me’ is about just being who you are. It’s a reoccurring theme on the album. Being true, being courageous. How fitting to have kicked it off in Russia. This song talks about homosexual love. It talks about sex change as a positive. These are all exciting things for us to finally feel free to say.

‘Break My Heart’ is sort of the ‘Disney Moment’ of the album. People ask us all the time “what were you listening to when you made the record?”. We always think it’s a bit irresponsible for an artist to list a bunch of bands or a bunch of different artists that they wanted their records to sound like. It’s like a painter setting up a blank canvas and then setting a Picasso next to it to begin. That doesn’t really make sense in our book. We always turn all the music off but one thing we left on was soundtracks, or even the idea of soundtracks, an abstract idea of cinematic soundtracks. ‘The Land Before Time’, ‘The Sound Of Music’, ‘The Never Ending Story’, these were all spirits that joined us in the making of the record. ‘Break My Heart’ follows in that theme.

Jacob was kind enough to let me put ‘Face Of God’ on the record. I had just gone through a year of closing doors on people who were poisonous in my life. Actually, the last three years since coming off the ‘Portamento’ tour have been three years of purging and cleansing. It was not fun, it was not easy and it’s still a process. There’s days where I miss the poison and days where I long for those empty feelings because sometimes they just feel good… but you’ve got to think long term about everything, you can’t just live in the moment, you’ve also got to live in the past and you’ve also got to live in the future while being entirely present now. The song ‘Face Of God’ is all about that. It’s about being present and clearing out the cobwebs so you can see clearly. It’s my atheist anthem. I feel like so much progress could be made if we weren’t fooling around with the idea of what comes next after we all die. People could be helped, time could be saved and we’d all be in a better place. Please, listen to and enjoy Face Of God.

Americana has always been a real cornerstone of our band or at least this abstract idea of it. We like the idea of national parks, campfires, camping, boy scout culture, all those wonderful things that seem beautiful, at least at a first glance. I think it’s very easy to romanticise the past and let it run away with you and we sort of welcome that idea with open arms. ‘US National Park’ seems innocent enough but the lyrics talk of dying alone and being scared of the real world and just being out of tune with the real world. It’s a delicate song and it’s the first time we’ve brought back whistling in quite some time. Only the nature behind this whistling might be a bit more unsure...

Deep In My Heart

‘Deep In My Heart’ was a song carried over from my solo project that I was working on two years ago. I never ended up releasing that. It’s funny. I had a record deal, I had a tour planned out, I had a full album mixed and mastered and at the last moment I turned my back on all of it and I just still don’t know what that’s all about. I will never truly understand myself or why I do certain things. But I asked Jacob if we could put this song on the album and he was happy to comply. I think it’s a song that is much like something we may have done in the past but digging deeper into ourselves. It’s very guitar driven where most of the album is a synthesizer spectacle.

‘Bell Laboratories’ is a song that shall forever be shrouded in mystery.

There is Nothing Left

‘There is Nothing Left’, it’s the second to last track on the album and it’s one of the last tracks we wrote for the album. We wanted the chorus to be huge and glistening and it’s a song about having no love or passion or feelings whatsoever towards someone… Specifically for me, this was about closing the door on people in my family that I grew up with that could never quite accept who I was. I’ve always tried my best to not hurt anyone and I’ve always tried to just be honest and to be myself and sometimes that’s not good enough. I’m at the point where I’ve realised that I’m done waiting around and I’m done fighting for something that will never come. When there’s a bad piece that won’t fit the puzzle, sometimes the only way to fix it is to throw that piece out and find a piece that works. It’s easier said than done, but when you find it, everything changes.

Much like its unlikely counterpart ‘Magic Mountain’ it talks of pulling together with something good, finally finding something true and fighting your way through to be victorious ultimately, or at the very least to find some peace. Jacob wrote this song for his solo project, this was a couple of years ago and I had not heard it. We try to stay out of each others business unless we’re dealing with The Drums… but he did show me this track and while I was driving around in upstate New York, not far from the dirty, poor, abusive town that I grew up in, it was the perfect song to hear at that time. I called him and was quite emotional. I had to pull over my car and just sit there and I played it again and again and again. At first he said no. He said he didn’t want to put it on the album, but quickly, he changed his tune and I’m so grateful that he did. I think it’s a beautiful song that for me stands up with Dolly Parton’s ‘I Will Always Love You’ and with the Fleetwood Mac song ‘Landslide’.