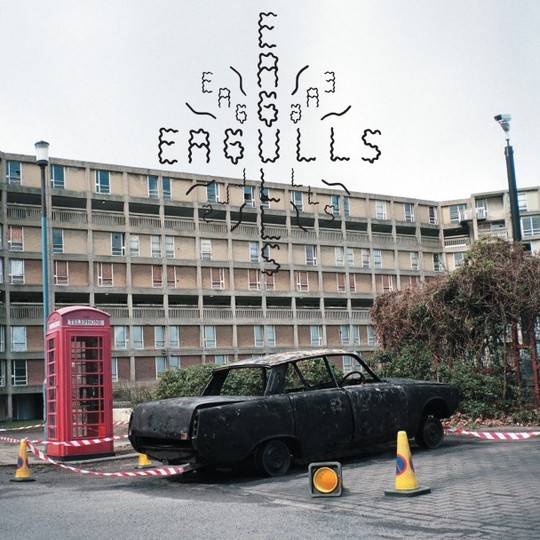 When Eagulls gatecrashed their way onto David Letterman's Late Show last month it felt like a pivotal moment in music television, alongside Huggy Bear on The Word in 1993 or The Stone Roses appearance on BBC2's The Late Show four years earlier. Call it deserved recognition after four years' hard graft or the first step towards the inevitable international acclaim that awaits, it served as a gallant reminder to any struggling UK band that perseverance does reap rewards every once in a while.

Not that Eagulls' elevation to the UK's next big musical exports in waiting can be put down to good fortune. The line-up remains the same as the five-piece I witnessed at 2010's In The City showcase, playing songs with titles like 'Jackson Bollocks' while screaming "You're an art fag!" that "Eagulls" are an entirely different proposition to the one standing before us today. For a band who've spent four years patiently honing their craft, their long awaited debut is a glowing document of how to successfully undertake transition on an epic scale.

The premature signs of this transition were there in the summer of 2012. That was when the five track Eagulls EP unveiled a significant metamorphosis that laid the foundations for what was to follow. Comparisons with The Cribs may have been bandied around from their earlier days - largely due to logistics and singer George Mitchell's vocal stylings - yet here was a band whose sound had undergone a distinctive transformation. While still undoubtedly in thrall to all things DIY and punk rock, they'd clearly been listening to what came next. Most notably Killing Joke. If further proof were required then last year's 'Nerve Endings' was the icing on the cake. Its buzzsaw guitars and colossal backbeat - redolent of Killing Joke's classic What's This For long player - complete with Mitchell's disturbingly frantic vocal combined to make it one of 2013's best 45s. Meanwhile, on the flipside was a cover of Killing Joke's 'Requiem', faithful to the original clearly but clearly bearing the Eagulls hallmark.

Make no mistake about it, despite being unashamed of wearing influences on their sleeves, Eagulls have a sound all of their own. From the twin guitar salvos of Mark Goldsworthy and Liam Matthews through to Tom Kelly and Henry Ruddell's flawless rhythm section crowned by Mitchell's voice of reason, they're an unshakable and on this, their long-awaited first LP, an unstoppable force.

Throughout its ten pieces, Eagulls delivers in every conceivable way. Opening proceedings with that single ('Nerve Endings'), the standard is set from the album's opening bars. 'Hollow Visions' and 'Yellow Eyes' follow suit in rip-roaring fashion, the former's scattergun assault clearing the way for the latter's cautionary build up that evolves into a widescreen cavalcade of effects laden guitars not that dissimilar to the one punctuating The Horrors' last two records. "I can't see it, can't feel it, can't her it..." cries Mitchell in life dependant fashion. Which sums up Eagulls to a large degree in that everything they do and say is believable. Which in turn gives us, the listeners, something worth believing in.

And so it continues. Recent single 'Tough Luck' could be described as 'Eagulls go pop.' Although whether daytime radio playlisters would agree is another matter entirely. 'Amber Veins' sounds like Californian punks Agent Orange in their Living In Darkness heyday, while 'Possessed' does as it says on the tin, Mitchell's vocal performance once again utterly convincing. "You're the pain in my neck!" he screams during the chorus of 'Footsteps', a bass-led stomper resembling a timeless relic from punk's halcyon years.

Entering the record's final third, Eagulls up the ante. The customary thrash of 'Fester Blister' segues indiscriminately into the punkgaze flavoured 'Opaque'. However, the best is saved for last. 'Soulless Youth' builds intensely, Goldsworthy and Matthews swapping riffs before erupting into a sonic maelstrom. "You're soulless inside!" spits Mitchell, oozing vitriol from every pore. It's a pulsating adrenalin rush that collapses under its own weight some six and a bit minutes later. And with it, brings Eagulls to a devastating climax. Ample proof that some things are worth waiting for.