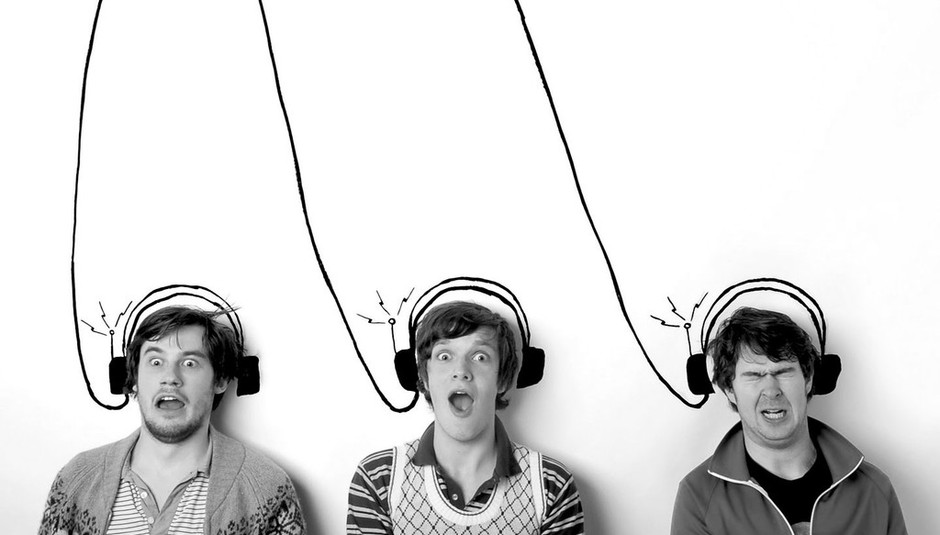 “I’m in the middle of Liverpool…”

And the Notting Hill Carnival’s just been dropped atop the city, presumably. That, or Liverpudlians conduct regular conversations at screaming levels. Turn it down, you Scouse barkers.

Digression: Friendly Fires are Ed Mac, Edd Gibson and Jack Savidge. The former of the three is on the other end of a telephone connection suffering from ulterior assault, passer-by vocal chords evidently the size of Transformer voice boxes. He hears me; me, I’ve a recording device plugged in, thankfully. Transcribed: as follows momentarily.

First, background. The St Albans-spawned trio’s releases to date number three and are the Photobooth EP, the Cross The Line EP and, most recently (and reviewed here as Single of the Week), the limited-run seven-inch ‘Paris’. Between two and three a remix release, rightly pointing newcomers to the band’s own roots: this is dance music, for dancing to; it’s not indie-dance music for geeks to get all chin-strokey over. It’s more !!! than not, more LCD than LSF.

Don’t over-intellectualise, kids – it makes the brain freeze up and your feet fall off, and with no feet you’re really gonna be bummed when Friendly Fires next roll into town. Your mates, shaking it some; you, glum at the side. That’ll teach you.

Your new single, ‘Paris’, just came out. With reception generally positive – t’was Single of the Week here – are you pleased with your efforts?

We’re all really pleased with it – it’s really nailed on the head what we wanted to achieve with it, which is kind of get that really danceable element in there but mix it with this sort of lushness to it as well. I think it’s done that.

Is it something of a statement of intent, your first genuine, Hello, this is Friendly Fires?

Sort of. I don’t want to say yeah, or that we’re going to write another tune like that, but when we write music we rarely begin with a true idea of how we want something to sound. It would be good if we could write another lush, sort of shoegaze-y but dance track. That’s the style that we really want to stay within, but it’s hard to marry the two without the results sounding like prog-house or something.

We wanted to write something that was as poppy and accessible as possible, but that had something interesting about it as well. I don’t think it’s completely devoid of something different, though: it’s got two drum parts in it, and that big synth drone, which is kinda different. But it’s still really poppy, and has a really poppy vocal line.

And the lyrics seem quite literal, easy to understand: boy and girl go to Paris, in search of a girl and a boy…

I always feel like an idiot talking about my lyrics – if someone ever writes these things down on a piece of paper and you look at them, they seem rubbish, but when you hear them, they’re all right. It’s quite literal – it’s not really a love song, but a song I wrote for a friend. It’s I don’t want to say any more than that or else I’ll sound like an idiot!

The song’s attracted comparisons, for better or worse, to Klaxons. Is pigeonholing something that concerns you at this stage?

No, not really, as I don’t think any of our songs really sound the same. I mean, they’re all within a field – all influenced by dance music, and funk, and things like that – but I’m not worried about being pigeonholed. We’ll see what happens – if people like the next release, that’s brilliant.

Well, for the time being things seem to be going well for you: profile’s on the up, and you’ve been out on tour a lot…

Yeah, and today we’re all pretty sleepy. I got woken up this morning by our drummer’s voice, and looked over to see him asleep. His voice was on the television – we were being interviewed on E4.

You woke up to see yourself on television? That’s got to be… surreal?

It freaked me out a little bit! It was a bit odd. I can’t listen to myself on TV! It’s embarrassing. I don’t know what it is…

But right now everything’s a lot of fun, yeah?

Yeah, it’s been really good. We’re playing a club show tonight, which will be ace because we’ve just been doing these shows with Interpol.

I was going to get to the Interpol support dates. I have this impression in my mind of you coming out to play before a sea of crossed arms and miserable faces…

That was exactly what we thought a few times, but then we thought, “We’ve got to go out and just be ourselves”. If people like it, they like it; if they don’t, they don’t.

And how do you feel you went down, playing to a crowd that wasn’t yours?

The reaction was positive – it’s not like we were booed off stage or anything. It got better, too – the last one we did in Newcastle was the best, with people genuinely clapping and enjoying it. I think that we were a bit scared of it, to be honest. But at the same time, it was Interpol, so we had to play it! They’re like a respectable, big indie band, which is something we want to be as well. It was also amazing playing massive venues – we played the Dublin RDS, and we finished, went back stage, and Bono was there. We were like, “Fucking hell, this is amazing”. He came over and started talking: “Yeah, I know St Albans, I played a gig there”. It was really… well, fun really. I want to push this as far as possible and see what we can do with it.

And if you didn’t follow up on the success so far? You’d keep going, I’d assume?

We’ve been playing music together since we were 14, so it’s been part of our lives for so long. It’s what we’re used to doing, and I don’t think we’d chuck it in if things didn’t work out – we love writing music, and that’s what we’d be doing with or without the heightened profile.

You sound quite focused on wanting to make this band as profitable as possible.

I want to sell a lot of records and go as far as possible, but you also can’t sit around, depressed, wondering why you’ve not sold so many records. That’s not very productive. I do worry a little about being able to pay our way, but so long as we can afford to do this, that’s cool. We need to fund touring, so as long as labels are alright with us, we’re cool. But, hopefully we will sell a nice amount of records!

One of which will be the debut album… out next year?

I’m really looking forward to getting an album out – we feel a sense of urgency about it, to just get it out, as we’ve so much good stuff we want to play to people. Lots of people ask us when it’s out, so we have to tell them we haven’t signed a deal yet. We’re hoping to get it out in June, in time for the festivals, and have a single out in March.

You’re likely to be a heavily tipped act for 2008 – any other acts tickling your own musical fancy right now, that you feel could turn more heads next year?

One artist I really like is Burial. Is he getting a lot of press right now?

Just a bit – Untrue has attracted a lot of acclaim.

There’s something about him – his music’s really soulful and dark, and a bit sexy. I’ve been listening to his latest while doing these Interpol dates, and if there’s one kinda dance band that could tour with a band like Interpol, it’d be Burial. It’s really good to listen to at night-time, on the bus.

A lot of reviews have said as much. Righto, one last question: how much cowbell is too much cowbell?

Ha ha… I think it’s not necessarily about how much cowbell you have, but how loud the cowbell is in the mix for me. There’s nothing wrong with a little cowbell to add some pop in the rhythm, but it’s about knowing when you’re forcing that cowbell right in people’s faces for a whole album. That gets slightly irritating. Our next track won’t have a cowbell in it, so we’ll see what happens with that.

‘Paris’ is out now on Moshi Moshi. Friendly Fires’ MySpace page can be found here. Confirmed 2008 dates as follows: