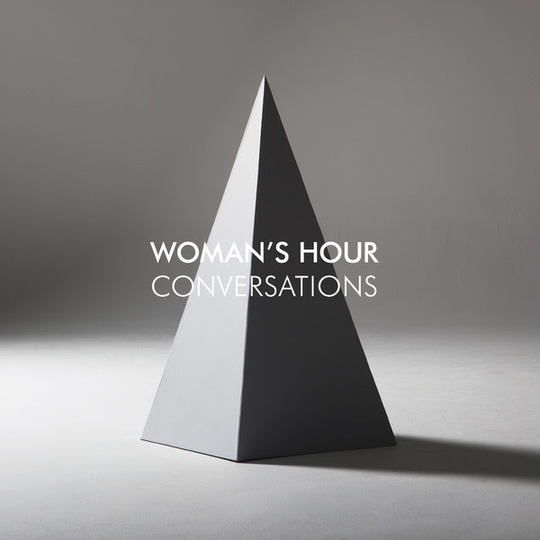 Instead of ploughing onwards into obscurity, the Kendal-born four-piece held back on releasing any new material. They took the bits that worked from their 'Jenni' / 'Human' double A-side, the aching lulls of tension and release, and made the rest better - so much better. The result of all this finessing is Conversations, a debut album to cherish and a testament to the power of the pause.

"If I stop, delay and I quit, would it be better for you?" croons singer Fiona Burgess on 'Unbroken Sequence'. This ain't no downcast kiss-off though, it's a mantra. Woman's Hour like to time their body blows. They'll fixate on a moment of untold trauma, ease you into its austere surroundings and then let rip.

'Our Love Has No Rhythm' boils this blueprint down to its purest form. An ocean of emotion is lathered over one lilting guitar line, as though any more structure would see the song disintegrate. Sparing flecks of synth and bass are only used to needle home the point.

Conversations is a difficult listen because of this. It doesn't cut the deepest on first impressions, but those undulating tones of utter desolation seep beyond skin deep with every fresh listen.

This is a difficult sentiment to sustain, let alone to dwell on, yet Woman's Hour exhume it out of you. 'Darkest Place', 'Devotion' and 'To The End' churn around your stomach like pound coins in a washing machine. The force of feeling as they shudder across bleak key changes and morose outros cuts through the superficial to something else completely. The xx may be the closest point of musical comparison, but The National and Antlers have that same knack of stabbing unease. Where a record sticks with you for longer than it ought to.

Although Conversations demands a lot, it’s plenty unsparing in return. Burgess’ lyrics are relentlessly intimate, ruminating over the aftermath of ill-fated relationships. “I’ve got nothing to say to her ghost, hoping she fades away,” she simpers on ‘Her Ghost’, although you could be forgiven for thinking otherwise. This album seems to be centred on a slim cast of characters, dabbling with only the most fleeting of happy memories in its title track, “Awkward moments of strange affection that could have been shared with anyone else.”

Despite this Woman’s Hour are a real joy to behold. To have held back from the hype machine and pursued their own vision of success is admirable. To have achieved this at the first time of asking, that’s damned well remarkable.