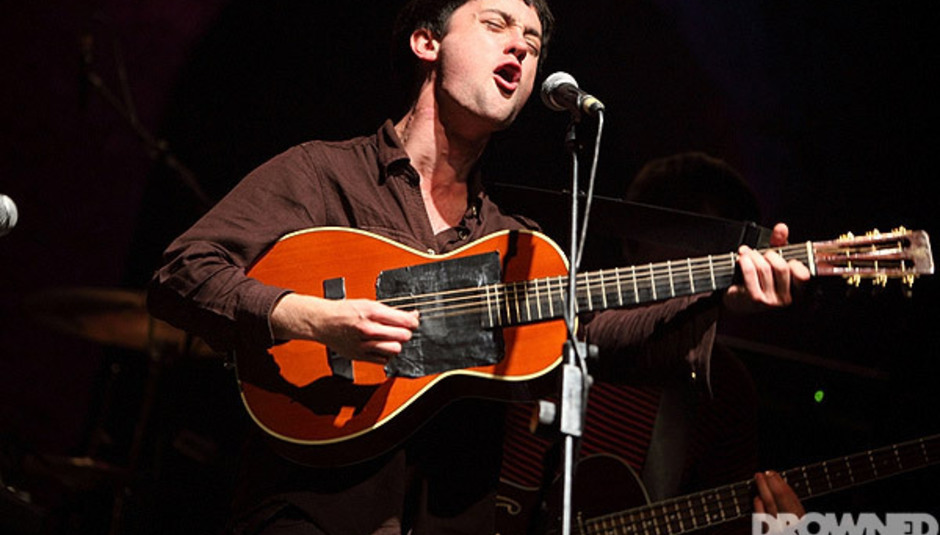 Oh January, you were meant to be a quiet month, wha' happen'? Prince, Postal Service, Daft Punk, Foals, Nick Cave, My Bloody Valentine, Suede, Timberlake and the return of David Bowie, that's what happened! And that's not to mention the albums, oh the albums, so many albums, and lots of them are rather special.

This month's playlist features a sampler of some of our favourite releases this month, peppered with a few things we wrote about over the past 30 days - like the return of My Bloody Valentine and Charlotte Hatherley (ex-Ash and Bat for Lashes, now Sylver Tongue)) chatting about sci-fi stuff.

You have a choice of Spotify or RDIO to listen to this month's playlist via:

"...{awayland}, the follow-up to Villagers’ Mercury Prize-nominated, Ivor Novello-winning debut Becoming A Jackal. Frontman Conor O’Brien has in a way become a musical Stallone here, cramming every trick in the book from the past few years of indie music into one neat little package... {awayland} isn’t perfect, but the odd weaker moment can be forgiven because the band has taken risks here in throwing together combinations of every trend that fickle music fans and critics have taken five minutes to grow tired of over the past couple of years, and yet they pay off to stunning effect when they really shouldn’t. ‘Earthly Pleasures’ for example continues with the pretty acoustics but chops up the vocals and sets them to a percussive beat that creeps up on the listener from being implied at the start to a punkish fury by the end. ‘Nothing Arrived’ takes synthesised strings and creates a sense of euphoria without sliding over into anthemic sugariness (take note, Elbow). You have a throbbing bass that echoes all of Thom Yorke’s mates on ‘Passing a Message’, but on the album it’s placed apart from its natural mate, the electronic dubstep beat that opens ‘The Waves’. ‘The Waves’ is the strongest track on here and a strong early contender for song of the year. Its changes in mood are so dramatic and yet so natural they envelope you, crash around you and throw you into a sea of glorious tumult that suggests the title was chosen on the song’s aesthetic alone, but moreover it is emblematic of the album as a whole... Far from falling under the weight of either expectation or ambition, {awayland} is a far more magnificent progression from Jackal than any of us could have hoped for."

Hear tracks and pick up your copy over at wearevillagers.com

1) Feature: “Good things change a little to adjust to the times” - Conor Oberst on the return of Desaparecidos
2) Review: Villagers - {awayland}
3) Review: Biffy Clyro - Opposites
4) Listen: Olafur Arnalds premieres the gorgeous new track 'This Place Was a Shelter'
5) Review: Everything Everything - Arc
6) Review: Yo La Tengo - Fade
7) Feature: Where Was He Then? David Bowie's Not-So 'Lost' Decade
8) List: Drowned in Sound's Favourite Albums of 2012: 5-1
9) Feature: Time to put the dog down? Why I'm going to miss HMV...
10) Review: Broadcast - Berberian Sound Studio
11) Review: Frightened Rabbit - Pedestrian Verse
12) Review: The Joy Formidable - Wolf's Law
13) List: And Drowned in Sound's Album of 2012 is...
14) List: Singles of the Year: 2012!
15) Feature: (This Is) The Dream Of Jimmy and Ben: 10 years of The Postal Service
16) Feature: "'Inhaler' almost didn't make it onto the album": DiS meets Yannis from Foals
17) Review: Ducktails - The Flower Lane
18) Review: I Am Kloot - Let It All In
19) News: Suede give away new song 'Barriers'
20) Feature: The Meaning of Ritual: A Songwriting Masterclass with Conor from Villagers

Watch: Suede, Foals, Richard Hawley, The Cribs, Everything Everything live for 6 Music